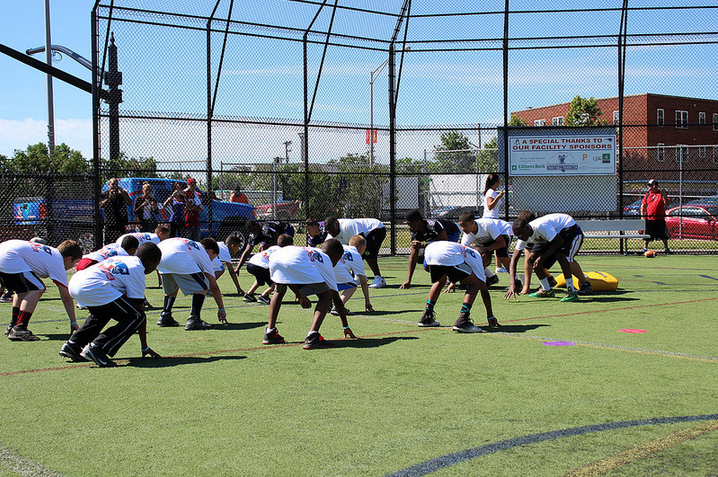 I believe that a good stance no matter what level of football you are coaching is basic to sound execution. The stance you are teaching must directly relate to the plays you are running. Without a good stance, your offensive line will be unable to execute their assignments and techniques properly. The stance I teach is a three point stance with the weight basically distributed over the inside of the feet with as little weight on the down hand as possible. It is extremely important that you be consistent with your stance – be able to make all necessary movements from the same stance. Your run stance must look like your passing stance. Defensive players are always “alert” for anyone “tipping” their intentions by changing their stance. NOTE: I will allow the offensive line to alter their stance only in short yardage, goalline, and obvious passing situations.

1. BASE: – Shoulder width but never wider. (If the base is too wide, it tends to cause you to false step or to over extend the base on the snap of the ball).

2. FEET: – “Toes” pointing slightly in – to get to this position you need to emphasis “heels” slightly out. This position will force your power through the inside of the knee to the “balls” of your feet. NEVER allow the back heel on the staggered foot to come of the ground more than 1/2 inch. This is important for maximum traction on get-off.

3. STAGGER: – Stagger the feet so that there is a 2 to 3 inch relationship between the up foot and the back foot. Never more than a heel to toe relationship. The stagger relationship is geared to a balanced stance.

4. ELBOWS AND HANDS: The down hand should be position off the near ear, with the down hand resting off the finger tips. The opposite elbow resting slightly above the knee or off to the side. The hands should be relaxed and not forming a fist, this helps the get-off (don’t be tense).

5. SHOULDERS – BACK – TAIL: You want your shoulders square to the L.O.S. with the back flat or parallel to the ground. The tail should be an extension of the back and NOT in a squatted or drooping position.

6. HEAD AND NECK: You want the head and neck to be an extension to shoulders, back, and tail. You want the neck to be in a semi-bowed position but not in a “bulled – neck” position that forces the tail to drop.

7. POWER PRODUCING ANGLES: The stagger of the feet places the up foot in a position to create power producing angles in the ankles and knees. This is called a “Z” in the knee. To get this position, slightly roll the knees forward on the up foot so that it is over the toe. This will place the weight on the balls of the feet – outside heel may come slightly off the ground.

8. INITIAL MOVEMENT: As an offensive lineman you must be able to explode out of your stance; your back parallel to the ground, make sure your going FORWARD NOT UPWARD. We want our offensive linemen always stepping with their near foot when exploding off the L.O.S. as it applies to scheme and play called. It will be necessary at times to shift your weight from one foot to the other – this can be a mental shift rather than a physical one.