Most skiers can identify with a troublesome offside turn. The 2007 U.S. Open runner-up Thomas Moore says that keeping your shoulders level and your arms straight through the edge change makes it easier for the ski to travel out from underneath you into an arc instead of shooting out in front of you. Movements such as pulling your arms in off the second wake or dropping your inside shoulder put you on a narrow path and limit outbound trajectory, sacrificing width. So, instead of tensing up into your toeside turn, relax your arms and let the ski advance outbound off 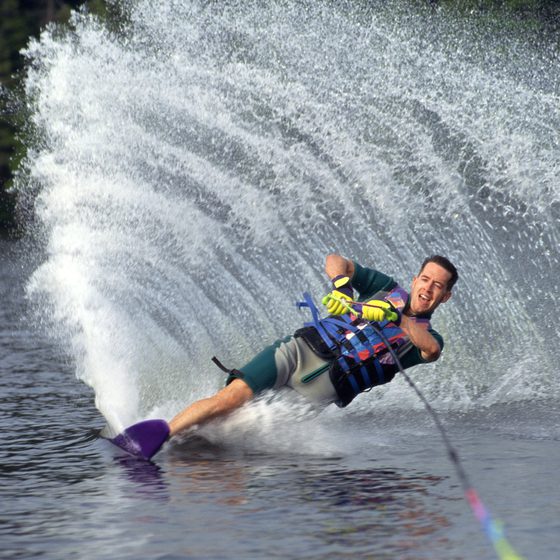 Most skiers can identify with a troublesome offside turn. The 2007 U.S. Open runner-up Thomas Moore says that keeping your shoulders level and your arms straight through the edge change makes it easier for the ski to travel out from underneath you into an arc instead of shooting out in front of you. Movements such as pulling your arms in off the second wake or dropping your inside shoulder put you on a narrow path and limit outbound trajectory, sacrificing width. So, instead of tensing up into your toeside turn, relax your arms and let the ski advance outbound off the second wake.
Adjust Your Alignment
A balanced stance on the ski is priority number one. Look at any of the top skiers and you’ll notice that their knees, hips and shoulders are all in line. Squatting on the ski with your lower body and tensing your arms will lead to a heavy shoulder and getting bounced over the wakes. To combat this, Wade Cox recommends a pullout drill, which teaches the skier to create maximum speed while being light on the rope. “I did the drill for years myself,” says Cox. “You basically practice a gate pullout on each side of the boat and focus on your alignment. As soon as you come up on the boat, you simply coast back to the wake and repeat.”
Grip It Right
If you don’t grip the handle the conventional way, you may want to switch it up. “You could instantly put yourself in a more balanced position on the ski,” says Cox. It’s a simple rule: With a baseball-bat grip, left-foot-forward skiers should have their right hand on top, and vice versa for right-foot-forward skiers. It may take a few passes to get comfortable, but soon after you’ll be much more symmetrical. Cox tells skiers making the grip change to hook in from the bottom of the handle on their offside turn.
Focus and Repeat the Positive

Watch men’s jump world-record holder Freddy Krueger prep for a set and you’ll quickly see why he dominates the ramp. Whether it’s a training session at his home lake in Winter Garden, Florida, or the final round of a major event, Krueger’s routine is the same. “If you want to perform your best, it’s important to have structure to your training,” says the world champion. He recommends monitoring your training sets to find the positive commonalities, both mental and technique-oriented, that can be repeated in future sets. He stresses that quality time on the water overrides quantity every time.
Ride the Slalom Swing
World-class coach Matt Rini says as the line gets shorter in the 32- to 35-off range, it’s not so much that skiers can’t get outside the buoy; the biggest thing is understanding that, like a pendulum, you want to be quickest from the bottom up to the apex in order to ski most efficiently. “The more you can get your momentum to cast you out, the less work you have to do,” says Rini. “The more level your shoulders are during the edge change, the more swing you get.”

Fast Track to the Course

Wade Cox says the majority of skiers that he coaches at 15 off, 30-32 mph are late on the gate. Often times the skier’s two-handed gate is slow and they end up riding flat. For many skiers, the one-handed gate is responsible for rapid progression in the course and often leads to elated fist pumps exiting the gates.
Your First Movement
Your approach into 1 ball has everything to do with your very first movement to pull out for the gates. “The reason why I do the one-handed gate is to get the intensity up pre-course,” says Karina Nowlan. “I begin my first movement on the balls of my feet and let my hips fall to the left, keeping my chest still and relaxing my arms.” This technique is no different for skiers who are left or right foot forward or use a traditional two-handed gate. “It’s important not to stay on edge too long,” explains Nowlan. “It should be short, intense and sweet.” Moore has a similar approach to his gate. “I think about turning away from the wake and being dynamic rather than tipping over into a static pullout. This allows the ski to get maximum angle away from the wake and creates an earlier apex and lighter turn-in.”
Let Your Hips Lead the Way
You’re not going to overpower a 3,000-pound boat, so don’t fight its pull with your shoulders. Moore says some skiers block with their left shoulder on the pullout for their gate as well as their approach into the toeside turn. This causes them to get stuck on edge, resulting in down-course direction and inhibiting the ski from being released into the turn. Let your hips move over the ski edge more smoothly while remaining square and balanced with the shoulders, and you can carry the ski out wider on the boat to apex sooner and have more time to turn. “As a left-foot-forward skier, I want my gate pullout to feel just like the backside of my 1, 3, 5 turn,” says T-Mo.
Move Early

Many skiers have a tendency to pull too long and end up way down course. To avoid this delayed reaction, Nowlan simply taps on the rope of her students to remind them when to begin their movement outbound and start their turn on the buoy. “The key to the course is establishing good rhythm early and not waiting on the buoy,” says Nowlan. “The buoy is the finish of the turn and you need to get your ski going out and carving a lot sooner, instead of skiing at the buoy and then trying to turn it.”
One Long, Continuous Turn
A simple way of thinking about your slalom turns is dividing the course into two sides. From the centerline of the boat to the right of the wake (buoys 1, 3, 5) is one side, and to the left of the wake (buoys 2, 4, 6) is the second. Now imagine from the centerline (when you’re directly behind the boat) to the buoy and back to the centerline as one long, continuous turn. When Nowlan is at the apex of her turn, she uses her momentum to cast the ski out and carve all the way back to the centerline without being heavy on the rope. “Before the boat catches you, start turning in and meet the boat at the wake to give you a nice swing-out,” Nowlan says.

Join me and PGA Pro Eric Lillybridge at the Casa De Campo Golf Learning Center as we show you a...