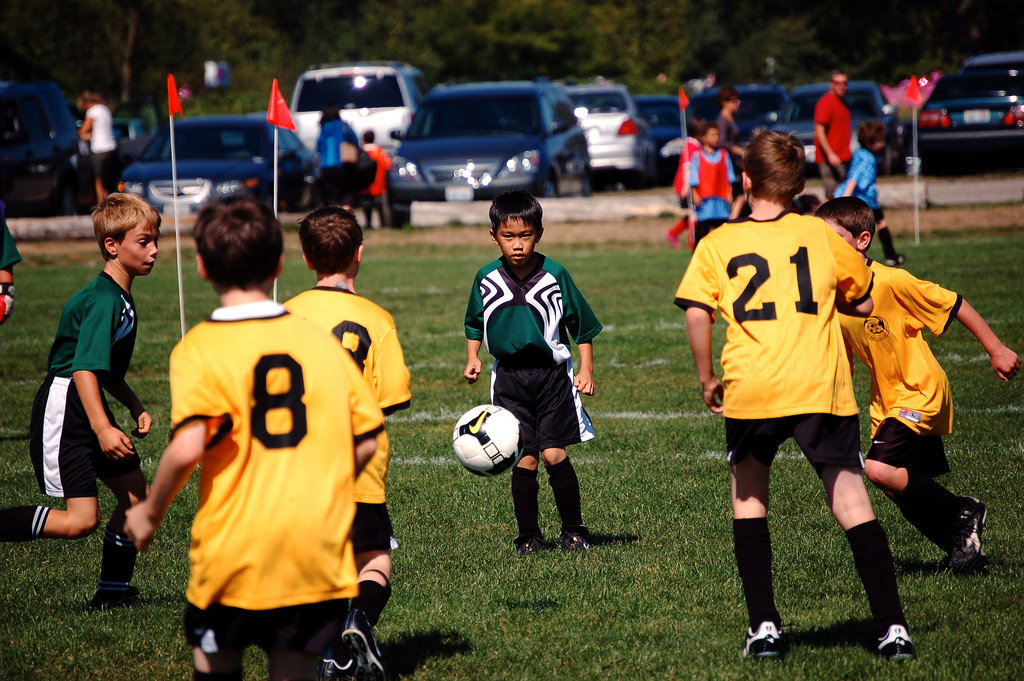 PREFACE: The difficulty of teaching Soccer Positions is that, except for Fullbacks at young ages, players often move around the field and don’t stay in one spot. So, the positions are “relative” to each other, and generally when on Defense, the “left” side players should stay on the left side of the field, the “right” side players on the right side of the field (left and right are as you face the opposing Goalie), Fullbacks should be closer to their Goalie than their Midfielders are, and Midfielders should be closer to their Goalie than their Forwards are. These guidelines also apply when a team is on offense, but not as strictly. (Offense is more creative than defense and players may “overlap” in order to advance the attack; this is particularly true with Midfielders and Forwards, because most coaches may want their Fullbacks to be conservative and stay in a defensive position in case there is a counterattack by the opponent).

BASIC POSITIONS: The number of players who play on the field varies greatly by age and league, and can range from 5 per team to a maximum of 11 per team. If there are only 5 on a team they may not have “Midfielders”. Following are the basic positions for each team:

One Goalkeeper (“GK”).There is always just one Goalkeeper per team. The Goalie’s job is to defend his team’s goal and he usually stays close to his goal. You can identify the Goalie because he wears a different colored shirt or a vest over his shirt. As long as he is in the “Penalty Box” he can use his hands to pick up the ball, but if he comes out of the Penalty Box he cannot use his hands. (This is a very simplified description, read “Goalkeeper” in the Dictionary for more details). Except for “Throw-Ins” and to pick up the ball in “Re-Start” situations, the Goalie is the only player who can legally use his hands.

Usually 2, 3 or 4 Defenders who are called Fullbacks (“FB”).Fullbacks play closest to their goal (which is the goal their Goalie defends). Along with the Goalie, they have the primary job of stopping the opponents from scoring. However, to a degree, every player should be a “defender” when the opponent has the ball. One way to teach this is by teaching the concepts of “First Defender” and “Second Defender“.

Usually 1, 2 or 3 Forwards (“F”).Forwards play closer to the opponent’s goal, which is the goal guarded by the opposing Goalie. The Forwards are the primary scorers, although Midfielders sometimes score and at older ages Fullbacks even occasionally score.

There are also 2 special positions that some, but not all, teams use; a “Sweeper” and a “Stopper“.A Sweeper will play behind the Fullbacks and a Stopper will play between the Fullbacks and the Midfielders. These positions add additional layers of defenders and give you defensive strength in the Center of the field. See “Sweeper” and “Stopper” in the Dictionary for a more detailed description.

EXAMPLES OF WHERE PLAYERS MIGHT BE POSITIONED ON KICK-OFFS: