Intro | 4 Keys of Throwing the Football Kinesiologists have proven that throwing a football is the most complex mechanic in any sport, any position. So how are we supposed to get a kid to to be able to do that consistently, predictably, and with high confidence so we can execute our offenses and give our programs the best chance of success schematically? The answer, as is often the case, is to simplify it. If we can simplify a multi-variant kinectic chain reaction down to just a few links that we focus on, then it gets simple to make small adjustments, corrections, 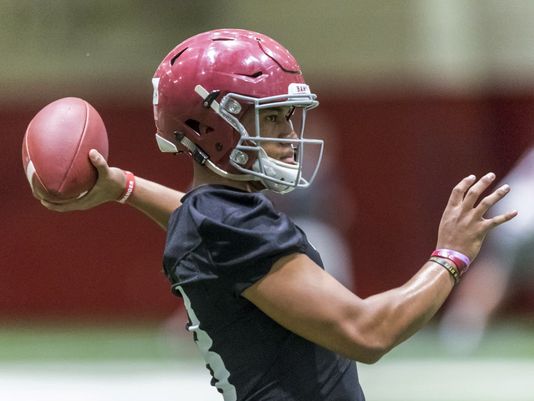 Intro | 4 Keys of Throwing the Football
Kinesiologists have proven that throwing a football is the most complex mechanic in any sport, any position. So how are we supposed to get a kid to to be able to do that consistently, predictably, and with high confidence so we can execute our offenses and give our programs the best chance of success schematically? The answer, as is often the case, is to simplify it. If we can simplify a multi-variant kinectic chain reaction down to just a few links that we focus on, then it gets simple to make small adjustments, corrections, and coaching points but yields the level of repeatable success we need. Rather than worrying about the 20+ joints involved in a single throw, we break it down to just a few.
The four key principles that must be executed consistently for a quarterback to maximize accuracy, velocity, timing, and ultimately performance.
The throwing arm must reach 90 degrees in the elbow and the arm pit
The elbow must track up and over the shoulder directly at the target
The arm must reach triple extension outward and upward to the target
Front shoulder must be perpendicular to the target to generate torque
1. Throwing arm must reach 90 degrees in the elbow and armpit
For the arm to track through the sagittal plane, improving lateral accuracy, the elbow almost inevitably must position straight back at 90 degrees before it rotates up and over to the target. The key point to this mechanic is getting it to that position as quickly and efficiently as possible, so that it can begin moving forward, thus reducing the time it takes to execute the throwing motion. Using a longer arm by straightening or extending the forearm on the backhinge, or circling down and around to the 90 degree position, instead of hinging straight back, lengthens the radius of the throw, making it take longer, move slower, and ultimately sacrificing velocity and distance. Think of the arm like the more complex trebuchet compared to the simplistic catapult.

2. The elbow must track up and over the shoulder directly at the target
Projectiles go straight. So an arching force, like a throwing arm, that has any degree of horizontal path creates nearly 180 degrees of possible vectors for the ball to take. A ball released just a thousandth of a second early, just one degree too soon or too late, will forever be one degree off target, which is a mistake magnified by distance. Therefore, the optimal throwing plane is one that tracks through the sagittal plane (down the midline of the body) instead of through the transverse plane (around the spine of the body).
Therefore, the variance of release point affects vertical targeting, but not lateral targeting. For example, a right-handed quarterback who slashes horizontally across his body will miss to the right with an early release, and to the left with a late release. With an arm path in the sagittal plane, the window of completion opportunity grows from the smaller lateral window of, at best, roughly six feet — the lateral wingspan of a grown man — to the distance from the ground to the highest reaching point of the receiver which is closer to a 10-foot window. A ball two feet too high could be a touchdown, where a ball one inch too wide could be an incompletion.

3. The arm must reach triple extension outward and upward to the target.
Peyton ManningPower is force divided by time. The most amount of force in the least amount of time equals maximum power. The shorter radius of the arm, created by collapsing the elbow, generates higher velocity in a much shorter amount of time, creating a more powerful throw. However, this potential energy is not effectively realized until the arm extends as quickly and fully as possible, maximizing the power generated before the ball is released.
When referring to the body, power is exerted through straight lines. Think of a punch with a bent arm, or a jump with bent legs; minimal power. But when a limb that is bent at its joints rapidly extends, maximum power is expressed at the moment those joints are extended in a synchronized effort. Extending the throwing arm completely, and firing the wrist at the exact moment of triple extension, maximizes power, accuracy, and spiral of the football. One way to think about this is comparing the similar properties of a gun barrel to the arm. A bullet passes travels through a straight barrel, just as a ball should release off of a straight arm. The longer the barrel, the more accurate the shot because it has been affected longer in the direction the barrel directs it. it also has more force because the pressure behind the bullet has accelerated it longer as it looks for the escape at the end of the barrel. Throwing is much the same. Longer arm equals more power and better accuracy.
4. Front shoulder must be perpendicular to the target to generate torque
In order to generate the necessary 90 degree torque from the rotation of the torso, which recruits heavily from the core muscles such as the transverse abdominus (the sleeve of muscle beneath the rectus abdominus that stabilizes power transfer from the lower body to the upper body) the front shoulder must be perpendicular to the target, or more specifically, perpendicular to the intersection point where the ball will meet the target. Power is ultimately created through the torque generated from the torso rotating 90 degrees as the side of the front shoulder points directly at the target then snaps open, bringing the hips, navel, and chest 90 degrees to the target.
This torque is the result of driving the hips forward, and transferring weight from the back hip pointing 90 degrees from the target, to the front hip that is pointing directly at the target, rather than a deliberate twist or rotation of the torso. This torque, which is a transverse movement — around the spine — is totally contrary to what the arm should be doing, working in the sagittal plane — vertically over and down the midline of the body. The coordination of these two different movements is the key to maximum accuracy and velocity. Think of splitting logs of wood — the torso rotates around, and as it opens back toward the target wood, the ax path must go up and over, coming down perfectly vertically. This mechanic is simple enough in theory, but getting young quarterbacks to take the time to commit their front shoulder the required degrees to point at the target is challenging, and more so the wider on the field that the throw must be. The second challenge arises once the quarterback has rotated his body to get his shoulder perpendicular to the target to stabilize, then must stop rotational momentum, and finally generate drive in the hips, that torques the upper body to the target while not affecting the vertical path of the arm. The key to effectively and efficiently creating this body alignment lies not in the front shoulder but in the back foot which should be set under the hip and at an angle perpendicular to the desired vector for the throw, so the foot makes a ‘T’ to the target.
However, setting the throwing vector by making a ‘T’ with the back foot is irrelevant if the foot is not in the right relationship underneath the hip. As an example, try opening your foot to make a ‘T’ to any target and place your foot on the ground. The shoulder does not align itself automatically. If the quarterback simulates a crossover step like the second-to-last step of a drop, with front shoulder facing directly down the middle of the field, and you envision a midline being drawn on the ground behind that crossover foot, two halves would be created. Essentially, the quarterback should set his back foot perpendicular to the target across the midline, opposite the direction of the target. Slant 45 degrees to left, foot plants opposite at 45 degrees to the right of the midline, under the hip. Flat route to the right at 70 degree from the center of the field, foot plants opposite at 70 degrees to left of the midline. Using this back foot much like a “rudder” of boat, immediately brings the front shoulder into appropriate alignment to the target, virtually eliminate the transition time needed to align the shoulder then drive the hips forward.