Most football coaches have a set of "Golden Rules" when it comes to what a good offense should or should not do. The fact is there is no unified list. Which is a better ball-control offense? Control the ball with the short passing game or the power running game? Is defense more crucial than offense? While it may be true that if they don't score they can't beat you, it is conversely true that if you don't score you can't win either. So balance is the answer then? Well, not if your ineptness is balanced. Is 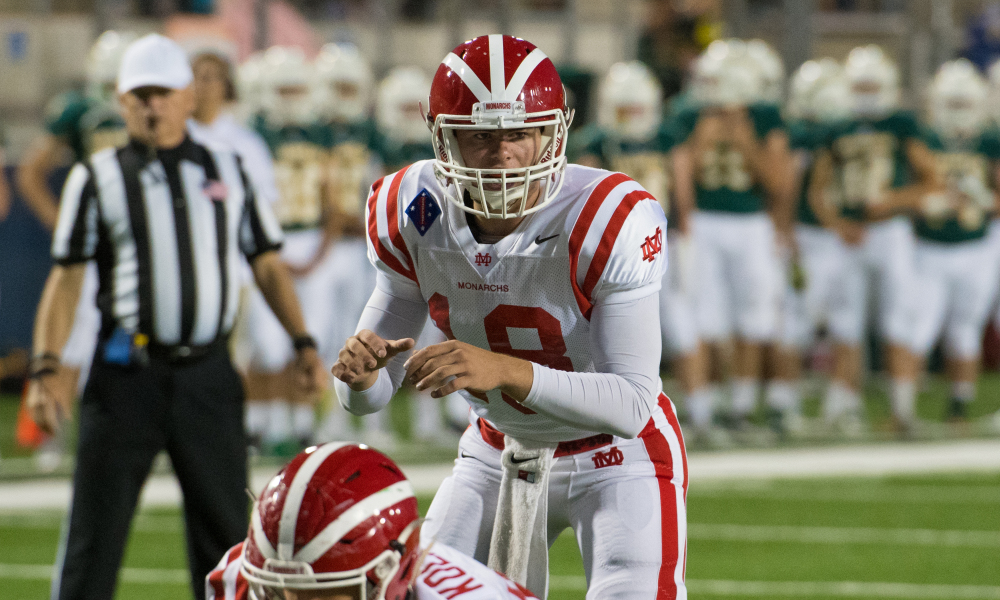 Most football coaches have a set of “Golden Rules” when it comes to what a good offense should or should not do. The fact is there is no unified list. Which is a better ball-control offense? Control the ball with the short passing game or the power running game? Is defense more crucial than offense? While it may be true that if they don’t score they can’t beat you, it is conversely true that if you don’t score you can’t win either.

So balance is the answer then? Well, not if your ineptness is balanced. Is surprise the answer? While the element of surprise is always cherished, a team would surely find minimal success if it ran the ball on a majority of third-and-10 plays, and passed deep downfield on every third-and-one.

With that, I stress 10 Golden Rules a good offense should practice:

• Force the defense to defend the entire field. Never allow a defense to crowd the line of scrimmage, stacking eight or 10 men in the box because you are predictable in calling the run. Never allow the defense to flood the zones with extra defenders because you pass eight downs out of 10. The offense should attack all areas of the field and force the defenders to stay at home, thus allowing the offensive coaches to create the basic two-on-one mismatches that lead to success for the offense.

• Minimize Mistakes. Turnovers and penalties are avoidable through sound practices and preparation. Few things in the game of football are as demoralizing as giving up a score while your offense is on the field. This momentum shift often changes the course of a game.

• Physically dominate the defense. Being strong and physical on offense is not as important as it is on defense–it is MORE important. A dominant offense can break the other team down physically and mentally. That leads to the offense taking control of the game.

Script the opening plays. The number of plays predetermined is not important, only that there is a set offensive game plan in place. These plays are usually a combination of the plays a particular offense has had success with and ones that are expected to produce results against a specific opponent. Using a script can also keep a team from getting rattled if the opening moments do not go as planned.

Take chances. No guts, no glory! All teams find themselves behind at times, and in need of a quick score. It is necessary to practice the quick strike if a team wants to be capable of scoring quickly when the need is present. Throwing the play-action pass on first down 30 or 40 percent of the time is a good start (at least during the running of the script).

Be disciplined. Know what it takes to be successful and prepare beforehand. Know specific responsibilities and duties and be sure to carry them out. When things are not going well, this is most important. Very rarely does an undisciplined, unconfident team have what it takes to overcome adverse conditions in a hostile environment. Players learn the necessary traits to overcome adversity in practice. Discipline can be rehearsed through substitution drills and special teams drills. Confidence can be gained through rigorous scrimmages and positive reinforcement.

Be prepared. Staff and players should prepare for a specific opponent with a specific game plan. The coaching staff needs to scout the next opponent via film or in person. Preparation for the next game begins at the final whistle of the previous one. There is no such animal as “game preparation.” Game preparation is merely a reflection of the week’s practice preparation.

Basically, a good offense is capable of both running and passing the football. The key is balance. I believe a good team should run the ball 60-plus percent of the time, yet gain 60-plus percent of its yardage via the passing game. This is possible only if the passing attack is aggressive in throwing the ball downfield.
In general, a good offense should seek to run the ball against a pass defense, and pass the ball against a run defense. This is an important concept designed to limit the linebackers’ and defensive backs’ effectiveness. When the run sets up the pass, and the pass sets up the run, and the defense is kept on its heels and spread out defending the entire field, an offense should be able to move the football.