Softball hitting is one of the most, if the not the most, important part of the sport. When it comes to hitting, you need to make sure you have enough skill to get yourself on base more often than not. If you don't, the coach just might sit you down because you simply aren't able to produce runs for your team. Click the following link to read about softball hitting and to understand why technique in this area of the sport is so important. Therefore, softball hitting technique is essential. These five tips give you some insight on 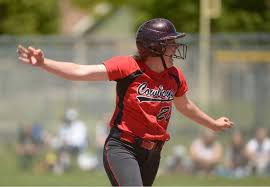 Softball hitting is one of the most, if the not the most, important part of the sport. When it comes to hitting, you need to make sure you have enough skill to get yourself on base more often than not. If you don’t, the coach just might sit you down because you simply aren’t able to produce runs for your team.

Click the following link to read about softball hitting and to understand why technique in this area of the sport is so important.

When gripping the bat, the hitter applies pressure with the fingers, not the palms. She grips the bat where the calluses are. The bottom hand (left hand for a right handed batter) controls the bat, and the top hand supports the bat loosely. The bottom hand grips the bat as a person would grip a hammer or a golf club. The top hand is placed against the bottom hand with a straight line. The arms are not crossed. The bat is gripped loosely – no white knucles here – and the wrists have flexibility. Some hitters curl the index finger of the top hand so that it only lightly touches the bat. For better bat control the player may choke up on the bat by moving both hands several inches up from the knob. Of course, a choke grip means a shorter bat and less power.

The hands start close to the body about three to four inches in front of the chest and between the shoulders. Both elbows are down, and the shoulders are tension free. Some players prefer a little movement back and forth with the hands and shoulders to keep them loose. We call this position the power position, or power alley.

The swing begins with the legs and hips (the hands and shoulders stay back.) The hitter pushes off the ball of the back foot as the softball approaches the plate. The back knee will begin to move in and the hips begin to rotate. During rotation the hips remain parallel to the ground. During the movement of the legs and hips, it is vital that the head and eyes remain level and still. As the hands begin to move the knob of the bat toward the ball, the hitter does not allow the bat head to fall below the hands. The lead arm maintains a 90-degree angle. This method of approaching the ball ensures a shorter arc and a more compact swing.

The head will come out of the proper position and eye contact with the ball will be reduced.
The back shoulder will drop down, which creates an unlevel position for the shoulders in their approach to the ball.
The hands will drop, creating a loop in the swing.
The back leg will collapse and eliminate any positive hip action in the swing.
The batter should allow the front shoulder to track the ball from the pitcher’s hand to the contact zone. As the bat is approaching the ball, the arms remain bent. If the arms are extended too early in the swing, the swing arc will be too large and hitter will sacrifice bat speed and power. As the hands move closer to contact, the top hand begins to rotate so that at contact the palm is nearly facing up. The hips continue to rotate as the hitter approaches the contact point. The back leg continues to drive into a now firm front leg, and the back toe begins to turn toward the pitcher.

The contact spot for a pitch down the middle is directly opposite the front hip. If the player were delivering a punch, she would want the recipient to be standing at this spot to receive the maximum blow. Contact for an inside pitch occurs sooner, in front of the body, and the hips must open earlier. On an inside pitch the batter should drive the back elbow into the body to get the hands out sooner and open the hips more quickly. For an outside pitch the contact spot is between the center of the body and back hip, so the batter must wait on the ball. The hips stay closed until contact, and then the back hip drives through. The hands are well ahead of the bat head on an outside pitch. The batter must be patient and wait for the ball to come to her. By using good rotation of the hips, the hitter can hit just as hard to the opposite field as she does when pulling a pitch. The player must understand where to make contact with different pitches so that she can hit the ball hard at each location. This is what we mean when we say “Hit the ball where it is pitched.”

At contact, both arms are bent close to the 90 degrees and the bat is driven through the ball on a level plane. After the ball has left the bat, both arms are fully extended. Both arms are straight, and the hitter should be looking down both arms and the barrel of the bat, and the V between them points directly at the contact spot. As full extension of the arm reached, deceleration occurs and the bat loses speed. The hitter moves her head down at contact and feels her chest go to the ball while maintaining a firm and rigid front side. The action is like that of a boxer driving his back hand and body into an opponent. Because of the pivot the back foot and knee are pointing at the front leg. Most of the weight is transferred to the inside of the front foot and leg. The body is in a balanced position with the weight on balls of the feet. The body flows into the ball.

The swing doesn’t end when the bat contacts the ball – it is important to make sure your players swing all the way through. After contact, the hitter should allow her arms to extend and her wrists to roll over, ending the swing with her hands near the front shoulder and her chin on the back shoulder. The majority of the player’s weight remains on the firm front leg, and the back shoulder, hip and knee should be aligned.