Soccer – Other | The most important soccer skills to teach young players

Soccer players need a lot of different skills, and it does not matter for most of these skills whether you teach Skill A or Skill B first. However, there are some skills that are absolute “must-haves” for any player- and are so important that you probably will want to teach them first. These are basic ball-holding skills (receiving and shielding); basic ball-stealing skills (defence); and basic take-on skills (attacking). Most kids naturally seem to have a few basic defensive skills, even if they were never formally taught. The other two areas require instruction to accomplish with even minimal competency, so 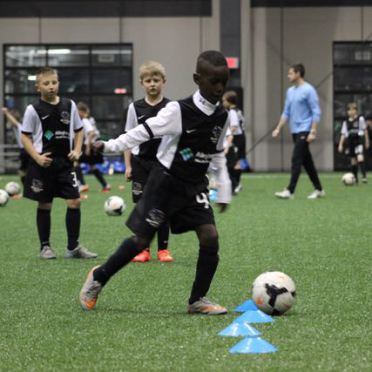 Soccer players need a lot of different skills, and it does not matter for most of these skills whether you teach Skill A or Skill B first. However, there are some skills that are absolute “must-haves” for any player- and are so important that you probably will want to teach them first.

These are basic ball-holding skills (receiving and shielding); basic ball-stealing skills (defence); and basic take-on skills (attacking). Most kids naturally seem to have a few basic defensive skills, even if they were never formally taught. The other two areas require instruction to accomplish with even minimal competency, so there is a good argument to start first with ball-holding skills; move next to take-on skills; and then to get to ball-stealing skills.

Why ball-holding before take-on? Simple. Once you get possession, the other side is going to try to take the ball back. If you can hang onto the ball under pressure, you’ll have time to make better decisions (including finding an open teammate to pass the ball to). Also, if you are confident that you can hold the ball, you are much less likely to blindly try to simply whack it away and let someone else worry about it (a technique commonly known as “passing the responsibility rather than the ball” or the “hot-potato phenomenon”). What are ball-holding skills? Most folks refer to them as receiving and shielding skills. The first step (receiving) is to bring the ball under control quickly. Then, you use your body/legs to get between the opponent and the ball to protect (shield) the ball. It includes really basic stuff like simply stepping over the ball when somebody is coming in, as well as somewhat harder stuff (but still easy) like rolling/pulling the ball back behind you or to your side. The rolling/pulling of the ball requires some work, as you need to learn to use both feet – and to switch feet. However, one of the key ingredients is to learn to bend the knees; get the arms out; and use your weight to push back into the opponent. As kids get more advanced, they can learn how to spring off of an opponent (or roll off of him by using a circle turn). However, at the very beginning stages, they are fine if they can simply get their bottoms down; get those knees bent; push hard back into the opponent; and get enough weight on their support leg to be able to free their far foot and use it to roll the ball around. Along with these ball-holding skills, you will want to introduce some basic receiving skills, so that they can bring the ball under control quickly (which is essential if they are going to have any hope of shielding it).

How to do this? Start with two equal-sized players with a single ball in a grid about 3-yards square and have them work on holding the ball by using simple rolls, pullbacks and other touches to shield the ball. If you teach your players ANYTHING, teach them the skills to keep possession. Once they realize that they have the skills to keep an opponent from stealing the ball, they will gain the confidence to lift their heads up and find another player to pass off to. Before they gain this confidence, you can expect terrible passing simply because they will get flustered at the first hint of pressure (and might even “feel” panicked at pressure which is 10-20 yards away). Until your players can hold a ball 1v1 in a grid about 10 feet by 10 feet for a count of around 7-8, they are not going to have enough confidence to do very well on the field.

After learning some basic shielding/receiving skills, the next thing to learn is some basic dribbling skills. Different coaches have different philosophies on how to teach dribbling. Many coaches spend a lot of time trying to teach young players a lot of fancy moves which were made famous by noted international stars (who, incidentally, only perfected these fancy moves after years and years of hard work on the basics). This approach works for some kids who are naturally graceful and quick. However, it can have the unfortunate result of convincing an awful lot of kids that “I can’t dribble” when they simply are still growing; are a bit clumsy; and cannot get their big feet and/or unwieldy bodies to do all of the ballerina stuff.

What these coaches don’t realize is that a player only needs to know about 3 basic moves to be able to dribble very successfully–and that virtually all top-notch players use these same 3 moves about 90% of the time when they are dribbling the ball. ANYBODY CAN LEARN THESE 3 MOVES (and this includes the coach)!

The moves are the check (a/k/a “magic hop” in some Vogelsinger videos); the simple cut/explosion using the outside of the dribble foot; and the chop (cut with the inside of the foot). If they can master these three moves, and learn the standard, straight-ahead dribbling technique (i.e. knee over the ball; front of dribble foot pulls the ball along so it stays on/near the foot at all times), they can learn to beat a reasonable number of defenders especially if those defenders are coming in at speed.

The key to take-on skills is getting the head up to watch the defender which is dependent on having enough ball-control that you know where the ball is and what it is going to do without needing to look. Then, as soon as the defender tries to stab at the ball, you can take advantage of his “dead leg” (weight mainly on one leg) by attacking the outside of the dead leg and going around him. Piece of cake!!

Of course, once your players become convinced that they can dribble, they probably will want to work on “cool moves”. This is a great warm-up. In fact, it can be great homework (Coach at end of practice: “Johnny needs to learn a new move and teach it to us at next practice; anyone who uses it in the scrimmage gets a lollipop”). But don’t put the cart before the horse. Convince them that they can dribble and the fancy moves will take care of themselves.

The next thing to learn is basic defence including simple delay as well as ball-stealing. The first thing to teach is simple delaying tactics by use of good footwork to get in the attacker’s way. Time is the defender’s friend, and speed is the attacker’s friend, so you want to delay and delay and delay to allow your teammates to come and help. Once you’re “numbers up”, it’s easier to steal the ball! The second skill is the standing tackle followed by the shoulder charge.

Of course, after you’ve taught these very basic skills, you’ll need to work on passing technique and kicking technique since most kids won’t be able to pass accurately or do a laces kick or a chip without instruction (although most will toe-kick just fine). Whatever you do, please don’t teach your kids that the “proper” way to score is to break the net with a hard shot. Many kids get the impression that they cannot play forward unless they have a very hard shot. This is garbage. Most goals in games will be scored by passes, not by blistering shots on goal (pull out your WC tapes and watch – this is universally true for most goals, except for set plays). So, get them used to scoring by simply passing the ball into the net and their future coaches will thank you. Nothing wrong with scoring by a kick, mind you. Just don’t get them into the mindset that their spectacular dribbling run through 6 defenders needs to end with a bullet shot as they’ll inevitably put the ball out too far in front of them to get the shot off and the keeper will make a meal of it. On the other hand, they most likely would have scored if they had simply kept the head up; watched the keeper; and pushed it past him.

Depending on your age group, the next stage is often to introduce wall passes but these take lots of ball control/receiving/passing skills which often are not present at younger ages or with newer players. You’ll also want to introduce the basic cutback or drop at some stage, as well as the square pass. The cutback or drop (where the on-ball player takes the ball to the goal line and cuts it back to the penalty mark) are common support options. These are all basic 2v1 options for support – and I haven’t even added the overlap!

There is not much point in even adding much in the 3v1 or 3v2 attacking category until your kids have mastered the basic jobs of the on-ball player and the player who is closest to him (the 2nd attacker, in coach-speak). Once the kids have figured out how to keep the ball; take somebody on; and provide simple 2v1 support; add in the concepts of basic triangles for support and focus on the job of the off-ball players to promptly move so that the on-ball player always has 2 safe, short passing options. Along with improving first-touch and some more basic take-on, finishing and defending skills, this should be quite enough to occupy your team (and you) through the next World Cup.

Along the way, expect them to make mistakes in deciding what was the “best” support option. Expect them to go to sleep from time to time, and not move into a good support position. Expect their first-touch to fail them. But, if you work them in these basics and push them to learn these simple rules, they are likely to be among the best players on the field in a few years.