Soccer – Other | Soccer: Study links heading the call to concussion symptoms – WHAT PARENTS NEED TO KNOW!

Whether in practice games or competition, soccer players who frequently head the ball are three times more likely to have concussion symptoms than players who don't rack up high numbers of headers, according to a study published Wednesday in the journal Neurology. When a bump, blow or jolt to the head or a hit to the body causes the head and brain to move rapidly back and forth, this can lead to concussion, a type of traumatic brain injury. The brain bouncing or twisting in the skull creates chemical changes in the brain and sometimes damages cells, according to 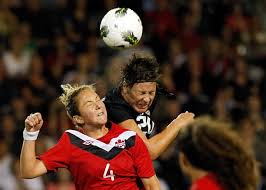 Whether in practice games or competition, soccer players who frequently head the ball are three times more likely to have concussion symptoms than players who don’t rack up high numbers of headers, according to a study published Wednesday in the journal Neurology.

One example: A December 2015 ruling by US Soccer, the game’s American governing body, prohibited heading in games or practice for any players age 10 and younger and advised only limited heading for players between the ages of 11 and 13.
“We took the position that once we’ve told people what we expect them to do, we’d like to help them with how to do it,” said Ian Barker, director of coaching education at the National Soccer Coaches Association of America.
In September, the association released an interactive online course that provides “coaches and parents with a practical tool” for introducing players to heading, Barker said. Working with Tom Kaminski, a professor at the University of Delaware, the association identified ways concussive impact of a soccer ball hitting the head can be reduced, Barker said. Kaminski, who is director of athletic training education at his university, did not participate in Lipton’s study.
Essentially, if a child has good technique plus “improved core strength and neck musculature,” concussive impact is lessened, Barker said.
“Kids bump heads with other kids; kids bump heads with the ground; kids bump heads with goalposts and other inanimate objects,” he said. “The University of Delaware and ourselves are not finding high instances of concussive injury directly as a result of trying to head the ball properly.”
More commonly, he said, it’s the accidental bumps and falls that lead to concussions.
Beyond soccer
Meanwhile, Lipton stands by his work.
“Professional guidelines all discuss concussion as a consequence of soccer but indicate that heading is an ‘uncommon’ cause of concussion,” he said. Yet heading accounted for an entire segment of “symptomatic events,” even if some admittedly may not be considered concussive.
“What we’re showing here is there clearly is an acute effect,” Lipton said. “That at least compels us to really think about what the long-term effects are and to study that.”
Soccer players “are very unique in that they will predictably have repeated impacts to the head which we can characterize and quantify,” he said, which makes them “an incredibly robust model system for looking at repetitive head injury.”
“The biggest problem with brain injury research, which I’ve done a lot of, is that when someone comes to the emergency room with a head injury or when a soldier has a blast injury, we don’t have any baseline of what they were like beforehand,” Lipton said. Doctors also don’t have access to “a way to characterize the magnitude of the exposure — meaning how much injury they had.”
A secondary aim of his study, he said, is “trying to characterize how the brain responds to repetitive injury, which have huge implications that go beyond soccer.”