U-8 soccer coaching objectives (7 Year Olds) Tell me and I will forget Show me and I will remember Involve me and I will understand 1. Developing a general understanding of the basic rules of the game • Goal-Kick • Corner-Kick • Kick-Off • Throw-In • Ball In and Out of Play – throw-in, “goal” and no goal”, corner kick, etc. 2. Teach the correct method of the throw-in; but don’t over do it, encourage players to shoot the ball with both right/left feet; how to dribble the ball; how to stop the ball. Show players that passing is another option to dribbling. 3. Encourage the players to 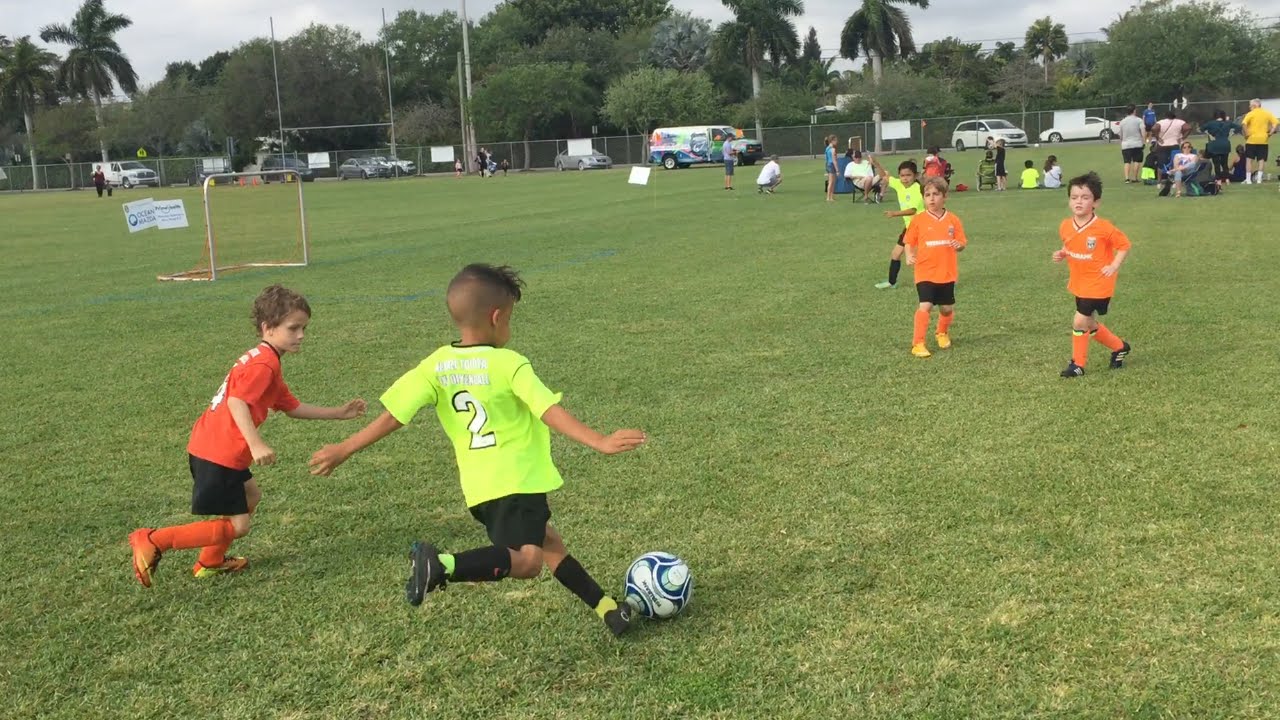 2. Teach the correct method of the throw-in; but don’t over do it, encourage players to shoot the ball with both right/left feet; how to dribble the ball; how to stop the ball. Show players that passing is another option to dribbling.

3. Encourage the players to cooperate – examples through passing; helping in defense by running back towards goal.

4. Do not expect the keeper/sweeper (supportive player) to grasp the concept of moving out on attack and defense right away.

5. Do encourage the keeper/sweeper (supportive player) to come off the goal line when play is at the other end of the field to support the attack. The back player can also serve to reduce the amount of space between the goal and an opponent attempting to shoot. This provides a smaller view of the goal for the shooter. The sweeper/keeper player also serves as support on defense, which provides coverage for the teammates in front of goal.

6. Do emphasize and encourage the idea of a team triangle when attacking and defending.

(A) Understanding of the basic principles of team play :

• Support in attack – The Big Triangle

2. Develop the role of the goalkeeper (Keeper-Sweeper)

• How to use hands to defend the goal

• Moving out to clear long kicks with feet when necessary

• Moving out to edge of goalkeeper zone and beyond, encourage goalkeeper to join in attack

3. Greater Cooperation by the field players

• Rotation of all players to play in all roles

4. Further appreciation of space in team play by:

• Attacking shape on goal-kicks and throw-ins

• Use of width on the field.

5. When in possession of the ball, stretching the opposition by the most advanced player pushing deep toward opposition goal

The game is for all players – everyone should be encouraged to participate, particularly the “non-assertive” player(s). Always encourage in practices & games the use of skill, creativity & decision-making. Don’t expect youngsters to play a “passing game”, don’t get caught up in tactics & formations or positions.

Systems of play at young ages will only lead to “Agriculture Soccer” since they dictate that players be “planted” rather than “playing”. Also never stifle the creative, gifted dribbler. Eventually all players will learn to pass as they get older. This is the time for players of all abilities to experiment & learn from trial and error. Encourage talking in practices & on the field, let them know this is their game and that they own it. If you believe that the difference between kicking and passing is thinking, and the difference between drills and activities is thinking, then you should understand the premise that “Soccer Is A Player’s Game” and your sessions should give players as many opportunities to both play, think & communicate as possible!

2. Development of the appreciation of space through the fourth player in what is called “third man play’ (see “Coaching 9, 10, and 11 Year Olds”)

• Continued encouragement to use the “width” – both sides of field

3. Encouragement in practices (and games) of the importance of team support-particularly in 3 v 3 and 4 v 4 games and practices, e.g., Micro Soccer, Zone Game & Change Soccer

5. Development of the role of the goalkeeper

• Coming out to narrow angle on shots

6. Continued development of basic techniques such as dribbling (to keep possession and to beat opponents), accurate passing and ball control Introduction or reinforcement of longer passing

• Appreciation of space – through the diamond shape – Use of width; stretching opposition from end to end (length)

• Awareness of “Third Man” when on attack