Soccer – Conditioning | The Drill That Could Save Your Soccer Career

Whether you’re watching the World Cup, English Premier League, La Liga, or Olympic soccer, you may think about grabbing your cleats from the back of the closet to play some pickup with friends.  And if that’s the case, former United States national team goalkeeper Tony Meola has some advice for you: Make sure you prepare your knees. Meola was jogging on the field at a low-key practice in 1999 when another player clipped him, putting him off his stride. A stud from his shoe caught in the turf, and his knee bent backward. “The next thing I knew, I 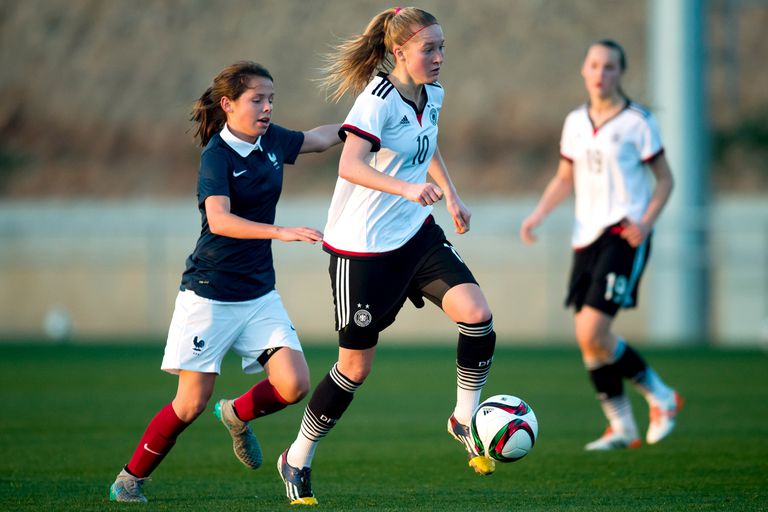 Whether you’re watching the World Cup, English Premier League, La Liga, or Olympic soccer, you may think about grabbing your cleats from the back of the closet to play some pickup with friends.
And if that’s the case, former United States national team goalkeeper Tony Meola has some advice for you: Make sure you prepare your knees.

Meola was jogging on the field at a low-key practice in 1999 when another player clipped him, putting him off his stride. A stud from his shoe caught in the turf, and his knee bent backward. “The next thing I knew, I was on the operating table,” he says.

The injury, a torn ACL, sidelined the then-30-year-old Meola for almost five months before he could return to the field with his MLS club, the Kansas City Wizards. He was lucky. Though surgeons have made steady progress in recent years, one study found that only 44% of athletes are able to return to competition after an ACL surgery.

Those injuries are very common in the United States—around 300,000 Americans blow out their ACLs every year. Concerned by this epidemic, Meola’s physical therapist, Holly Silvers, and his surgeon, Bert Mandelbaum, helped develop a set of preventive exercises for FIFA, soccer’s world governing body. In clinical trials, the program has cut by almost one-half rates of noncontact soccer injuries—not only to knees, but also thighs, ankles, as well as arms. “If they’d had this program at the time, I wouldn’t have had to go through what I did,” says Meola. Similar programs are now being devised for basketball, volleyball, and other sports where knee injuries are common.
The keys to the 15-minute routine stem from observations that Silvers, Mandelbaum, and others made after reviewing hours of video that captured knee injuries. Typically they saw the knee bend sideways toward the other knee. “We would see that the outer hips, glutes, and trunk were not necessarily weak but imbalanced,” Silvers says.

The experts devised a program that combines different exercises to help trengthen the core, hamstrings and hips, with plyometric jumps, balancing exercises and attention to form in running and cutting. It also trains the athlete’s nervous system, improve agility and control. The exercises are designed to be done with a team as warmups before practice, but we’ve adapted them slightly for individual use. Either way, do them on a playing field where you’ve got plenty of room.

Jog a few yards while keeping your knees, hips, and trunk aligned vertically. Make sure to keep your knees directly over your toes.

Raise your right knee forward, rotate it to the side, and then set your foot down, making sure to not to let your knees buckle, and to keep your hips horizontal. Then repeat with the other foot.

Raise your right knee to the side and then rotate your knee forward, then set your foot down. Make sure the hip, knee, and foot of the supporting leg are all aligned. Repeat on the left side.

Shuffle sideways several yards, make a circle, and return to your starting position. Bend slightly at the hips and knees, carrying your weight on the balls of your feet. Don’t let your knees buckle. Repeat in the opposite direction.

Jog a few yards. Shuffle sideways. Jump as if making shoulder contact with an opposing player. Land softly on both feet with your knees slightly bent. Shuffle back to your starting point and repeat.

Repeat exercise 1 for this step.

Lie facedown. Then raise up on your toes and forearms into the yoga forearm plank pose, your elbows directly under your shoulders. Maintain a straight line from your head to your heels. Hold the position for 20 to 30 seconds. Repeat that three times. For a more advanced version raise one leg for a few seconds, then lower it and raise the other leg. For abs of steel, raise your legs even higher and hold longer.

Lie on your side with your lower knee bent 90 degrees. Lift your pelvis and upper leg and hold for 20 to 30 seconds. Support yourself on your lower knee and forearm. Keep your shoulder, head, hip, and lower knee in a straight line, whether viewed from in front or above. For a more advanced version, straighten the lower leg and support yourself on your forearm and the side of your foot, always holding that straight line from head to heels. More still? Raise the upper leg and slowly lower it again. Repeat three times.

Kneel with your feet firmly anchored behind you under a heavy object such as a lat-pulldown machine, or with Pilates straps. (Here’s where having a teammate comes in handy.) Lean slowly forward with your body straight from the head to knees. When you are so low you can no longer hold the position, drop to your hands and use them to push back up again. Repeat three to five times. Need more? Add reps.

Stand on one leg and hold a soccer ball—or similar object—in your outstretched hands. Bend your knee and hip to lean forward slightly. Hold the raised leg slightly behind you for 30 seconds. Repeat twice on each leg. For a harder workout, add reps or close your eyes.

Stand with your feet hip-width apart. Slowly bend until your knees are flexed at 90 degrees, then straighten. Keep your hips, knees, and feet on each side in one plane. Stand up on your toes, then slowly lower again before straightening more quickly. Repeat. For a more advanced version, lunge forward until your leading knee is at 90 degrees, repeating on each leg 10 times. Still more? Steady yourself on a wall, raise one leg behind you as in Exercise 10, then slowly lower until your supporting knee is at 90 degrees. Straighten and repeat 10 times on each leg.

Stand with your feet hip-width apart and put your hands on your hips. Bend until your hips, knees, and ankles are all at 90 degrees. Hold for one second, then jump as high as you can, straightening your body. Land softly on the balls of your feet, and bend your hips, knees, and ankles as much as possible. Jump again, repeating for 30 seconds. To add challenge to the exercise, stand on one leg, bending as above, and then hop one yard to the side and land gently on the ball of your other foot, bending as above. Repeat for 30 seconds, going from one foot to the other. More advanced: Mark a cross on the ground and practice good jumping form as above, going forward, backward, side-to-side and diagonally over the cross.

Jog for 40 yards, making sure you’re keeping good form as in exercise No. 1 above.

After a few short steps, bound forward with your knee lifted high for six to eight steps, swinging the opposite arm across the body. Keep your body straight and land on the ball of the leading foot with the knee bent.

Jog four to five steps, plant your right foot, and cut to the left. Sprint five to seven steps, decelerate, and cut to the right. Repeat until you’ve gone the width of a soccer field, then jog back to your starting point.