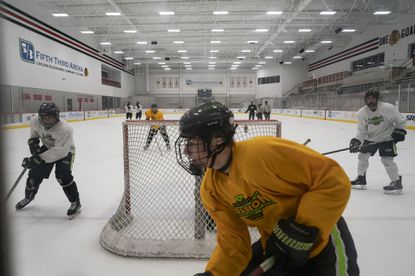 This 2 on 2 drill us typically used for station or ADM based practices and played in a smaller area. The animation and diagram show this being run using a quarter if the ice. It can also be run using half ice and is more suited for older players when you can use half ice.

COACHING POINTS
Fowards try to isolate one defender and create a 2 on 1 instead of attacking the 2 on 2.
Defenders should also be aware of player without the puck and communicate to which player they have.
Defenders need to control puck even if they have to pass to each other before making pass to next set of forwards.