The objective of hockey is simple: score more than your opponent. However, with the ever-increasing emphasis on defense and goaltending, how do you create offense? Zone entries are a sometimes-overlooked aspect of the game that often lead to the best offensive opportunities. Within the flow of the game, especially when entering the offensive zone, the objective is to outnumber your opponent, create odd-man chances and increase your probability for success (i.e., 2-on-1, 3-on-1, 3-on-2 advantages and so on). “It’s important to help players realize they’re not the only ones on the ice when they have the puck 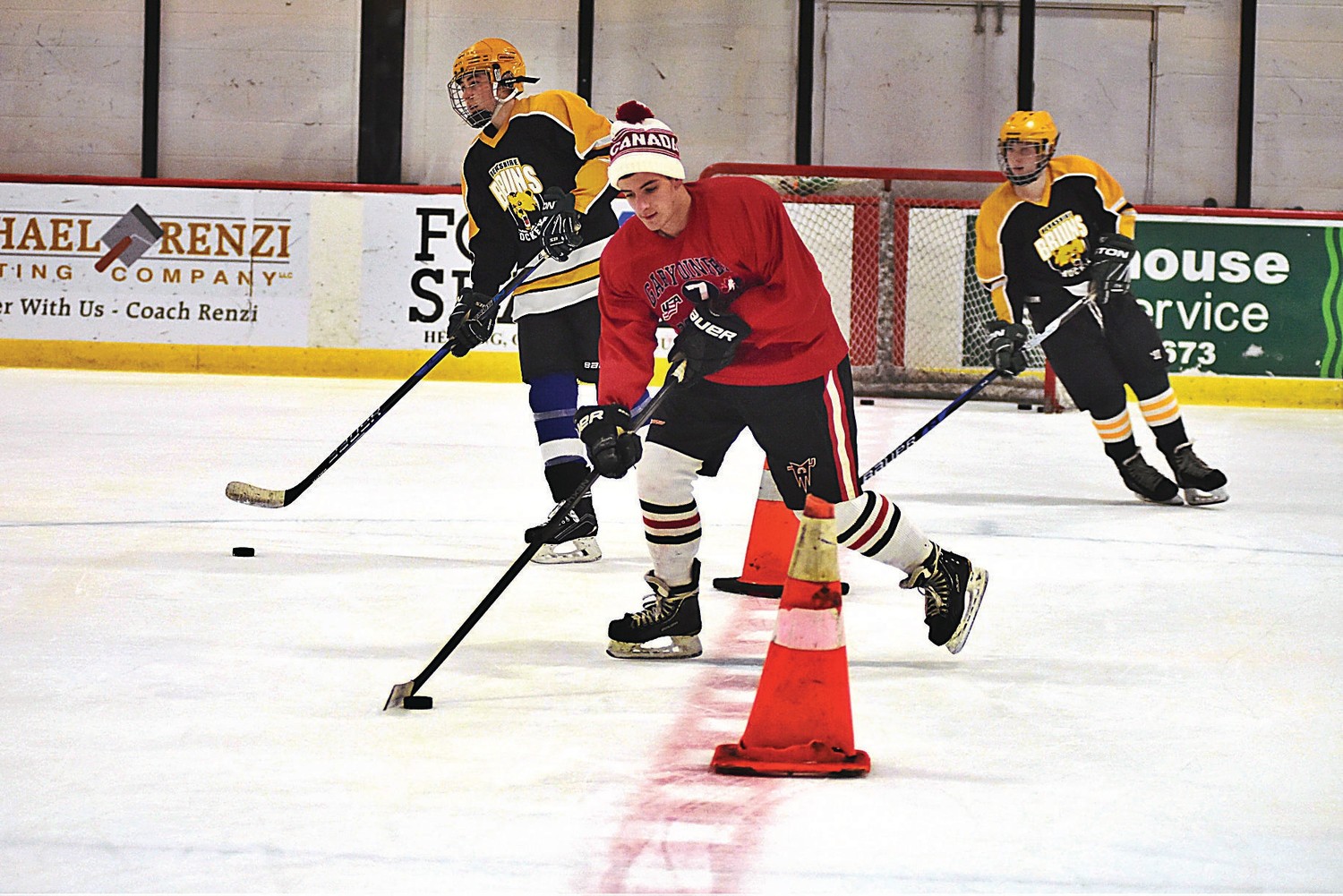 The objective of hockey is simple: score more than your opponent. However, with the ever-increasing emphasis on defense and goaltending, how do you create offense?

Zone entries are a sometimes-overlooked aspect of the game that often lead to the best offensive opportunities. Within the flow of the game, especially when entering the offensive zone, the objective is to outnumber your opponent, create odd-man chances and increase your probability for success (i.e., 2-on-1, 3-on-1, 3-on-2 advantages and so on).

“It’s important to help players realize they’re not the only ones on the ice when they have the puck and get them to try to find and create support,” said Larry Bruyere, former USA Hockey Pacific District coach-in-chief. “Develop that 2-on-1 strategy and support you’re looking for. Too often, they’re in a hurry to get up the ice and into the zone and then they’re in there all by themselves, so it’s not very effective.”

He believes communication from coaches is key and lessons can begin before even hitting the ice.

“It’s the type of thing that you can spend a lot of time off-ice talking about, to develop the concept of ‘what are we going to do with the puck and how are we going to get it into the zone?’” he said.

Bruyere said that 12U is about the time players should start learning about zone entries. As they become more proficient with puck-handling and passing, they can begin to learn concepts that will maximize zone-entry success and create more scoring chances.

In hockey, you never want the puck carrier to be on an island. Bruyere starts teaching zone entries with a basic strategy: support the puck and be an option for teammates.

“Having puck support when you’re on the attack actually starts when you’re exiting [your own zone],” Bruyere said. “There are teams that pride themselves on being puck-possession teams and the reason they’re so successful is because they give great puck support. They know that, generally, the 40-foot pass isn’t a good option. The 8-to-10-foot-or-less pass is really what the small-area games are all about.

“That’s what the game of hockey is: small-area battles. And puck support makes it work.”

When it comes to hockey talk, “time and space” go together like peanut butter and jelly. Time and space is something every good offensive player will try to exploit. The team with the puck is trying to make more, while the defensive team is trying to take it away. It’s an attempt to create more room for yourself or your teammates – either through movement, speed and, more often than not, patience.

“Being a good skater helps; it’s hard to create time and space if you’re lumbering out there,” Bruyere said.

The idea of time and space might be easy for coaches who have spent a lifetime in the game. But for younger players, surveying the rink for open ice and teammates, all while skating and puck-handling at a high speed, can be difficult to process.

“Time and space is fleeting, it’s temporary, so you not only need to be able to create it, but also use it,” Bruyere said. “You’re always looking to open up the ice, reading and reacting to what the defense is doing and taking what they are giving you.”

Filling lanes and attacking with layers

A way to expose time and space is by filling lanes and coming in waves of a layered attack. One player crashes the net, while another supports the puck carrier by trailing the play. When coming into the zone, players should look for open ice, regardless of position. The flow of the game, added with time and space, should determine where a player goes on the attack.

“When I was young, left wing stayed on the left side, right wing on the right. It was a different game. You were only responsible for your side of the ice – that’s certainly changed over the years,” Bruyere said. “Now, where you line up is not necessarily where you play. I don’t have a problem with my left wing being on the right side if he can be the first guy to the puck and vice versa.”

In a basic 3-on-2, often the weak-side player will drive the net, while the player in the middle will stay high for a drop pass. However, getting the middle player to drive the net can create additional space and open up lanes.

“The premise is to back the defense off,” Bruyere said. “It takes speed to make that happen, and courage.”

In this scenario, communication between teammates is crucial. The middle player needs to announce the intention to teammates, so they don’t have multiple players crashing the net. The player on the weak side can see/hear this, come in behind the player going to the net and then fill/trail high to support the puck carrier.

Changing the plane of attack, by making a cut or lateral move, is one of the most effective ways to create time and space. Lateral movement goes hand in hand with the previous concept of not being limited to one side of the ice.

“I like to have players who don’t mind playing the off-wing, so if I’m a left-hand shot, I’d play the right wing,” Bruyere said. “A left-hander entering the zone on the right side, with speed, is able to back that defender off a little bit. It’s a great opportunity to cut laterally, create space and get a shot or make a play. It’s one of my favorite things to teach kids to do.

“Moving laterally creates time and space and it allows for your teammate to get into position for a pass or a tip-in, and be more effective supporting the puck.”

Gretzky escape (curl back or button-hook)

Regardless of what you want to call it, Wayne Gretzky was the pioneer of putting the defense on their heels by driving wide and then curling back to hit a trailing teammate or creating space for a shot himself.

“Your good hockey players can pull that off,” Bruyere said. “It can be a very effective or very dangerous. Effective in terms of reading the coverage and making that button-hook and then making a decision immediately after buying time: Can I find a guy driving the lane and make a nice pass?”

It’s important for players to gain ice inside the zone (below the tops of the circles) before attempting the escape move. Curling back too close to the blue line is dangerous because of the possibility of a turnover leading to a breakaway.

Often after a Gretzky escape, if you have active defensemen joining the rush, they will be wide open. But defensemen adding to the rush shouldn’t be limited to only when a forward curls back.

“I really like having the [defensemen] getting involved all over the ice,” Bruyere said. “When you get to the higher levels, coaches get more conservative, but if you have a defenseman that can skate and handle the puck, gosh, make that player a part of your offense as often as you can.”

On a quick transition and correct read, a defenseman can jump into the play and support the puck carrier.

“It just creates so much more offense,” Bruyere said. “You don’t see as much of it in the NHL today, unless it’s late in the game and a team is pressing for a goal.”

When entering the zone, players need to be able to utilize their speed. However, it’s not necessarily all about being fast. It’s also about being able to change the speeds to beat defenders; slowing down and speeding up, or vice versa.

“Being deceptive with your speed,” Bruyere said. “Sometimes you want to slow things down once you’ve entered the zone because you have time and space. There’s nothing worse than seeing a player who’s just created some time and space skate themselves into trouble when they could’ve utilized that space instead.”

FacebookTwitterGoogle+PinterestTumblrLinkedInRedditEmailPrint
NewerTennis - Conditioning | Why physical conditioning is so important for a junior tennis player.
OlderSoccer - Defense | 10 Soccer Goalie Drills to Block Every Shot