Golf – Tips on how to bounce back after a terrible round. 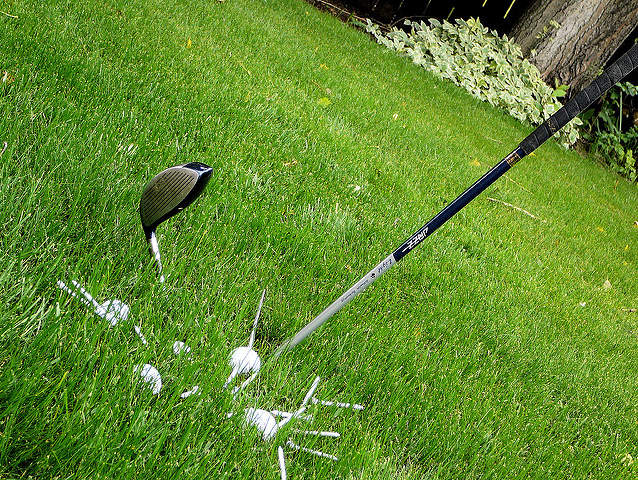 Few things are more frustrating, discouraging, and occasionally embarrassing as playing a bad round of golf. But if you really stop to think about it, golf wouldn’t be very much fun if you never played a bad round. That might be a weird concept, but think about it – how would you know just how “good” your good rounds were if you never had a bad one?

The reality is that the never ending challenge of the game of golf is exactly what keeps people coming back time after time to try and improve their games and accomplish new goals. It doesn’t matter whether you are trying to break 80 for the first time, or break 100 for the first time, all golfers have a goal in mind that they are working hard to reach.

Every golfer has experience dealing with a bad round and trying to get their mind back in a good place to play better the next time out. While bad rounds are inevitable, your response to them is completely within your control. If you choose to feel bad for yourself and dwell on the bad shots you hit, then another bad round is likely to follow. However, if you decide to look for the positives within your bad round and use them as motivation to move forward, you could quickly put that poor play behind you and post a good score in your very next round.

With that said, try using any or all of the following five tips to help you bounce back mentally the next time a bad round rears its ugly head.

1. There is No Connection

The first thing you need to understand about moving on from a bad round is that there is absolutely no connection between one round to the next. Just because you play poorly one round doesn’t mean that you are going to play poorly again – just like playing well one day doesn’t mean you will automatically play well again the next round. They are not connected events.

Each shot you hit on the golf course is completely disconnected from the last one, and from the next one. So rather than convincing yourself you’re in a slump and waiting for it to pass, focus instead on shaking off that last bad shot, hole, or round and getting back to playing well again. Sometimes all it takes is one really well executed shot to bring all of our confidence (and your game) back to where it should be.

Remember that good, bad, or indifferent, golf is a game that is played one swing at a time and that the goal is simply to hit as many good shots as possible in each round.

Bad rounds don’t affect you physically – your golf swing is the same as it was before you played poorly last time out. They can however affect you mentally, if you let them.

As the bad scores start to pile up, it is a common mistake to start to over-complicate the game and try to do too much with each shot. In these types of situations we often see players adding countless little “fixes” to their golf swing until they reach a point where they’re become so confused that they just give up. These are also the times when we see golfers trying to “make up” for a few bad holes by trying impossibly difficult shots which only dig them deeper into their bad round.

In reality, the opposite approach is the right one. If you are coming off a bad round, don’t go out for the next round with the intention of shooting the best round of your life all at once – simply head to the course and focus on hitting the first fairway. Once you have done that, move on to the next shot and repeat the process.

If you stand on the first tee worrying about what your score will be on the 18th green, you have very little chance of playing well. Simplify the game, and take it one shot at a time.

If you have the opportunity to get in a practice session between a bad round and your next round, be sure not to shy away from the things you did wrong. The majority of your practice time should be spend confronting those issues head on, so you can build confidence before you play again.

For example, let’s say that your driver was missing to the right on the majority of your tee shots, and that is what cost you strokes throughout the round. If that’s the case get onto the range and work on your driver until you get it straightened out. Then, when you do head to the course for your next round, you won’t be dwelling on that problem with your driver – because you already fixed it on the range.

Get the problems with your game out of your head before the next round arrives and you won’t have to worry about carryover from the last time you played.

Sometimes all it takes is a little positive reinforcement to remind you of what you are capable of on the golf course. For this reason, it is a good idea to keep scorecards or other mementos from great rounds you have played previously.

After a poor round, look back over some of your best rounds to get those positive feelings about your golf game brought to the front of your mind. Picture the good shots you hit, and remember the emotions that you experienced while posting your best rounds.

There’s nothing good that will come from constantly dwelling on those bad shots, holes, or rounds that will inevitably pop up from time to time. Next time you play, instead of thinking about that bad round you had, think about all the good things you have done on the course.

5. Get Your Mind Away from Golf

If all else fails, a mental break should do the trick to get your mind off the disappointing round you recently played. Look to another one of your hobbies to fill some time and engage your mind on another task. You don’t have to take a long break from golf – just enough to get your mind onto other things and refreshed from the frustration that you were feeling. Soon enough you will realize that it was only one bad round, and there is no reason you can’t get back on track the next time you play. A quick mental reset by stepping back from the game could be all you need.

Don’t let a single bad round sour you on your golf game for weeks or months to come. Even the best players in the world have poor rounds.

Instead, simply go right back to work trying to do better the next time out. Remember, golf is such a great game because of the incredible challenge that it presents – and sometimes that challenge is going to get the better of you.

There is no shame in playing a bad round, but there is shame in letting it get the better of you mentally. Remain positive, work on the parts of your game that let you down, and play great the next time you tee it up.

I’m still learning to control my temper but hey we’re all just having fun right?