There are two points of contact when you hit any type of short-game shot. One is when your clubhead strikes the ball, and the other is when your clubhead strikes the ground. If there’s anything I’ve learned in my 20-plus years of coaching, it’s that you have to optimize both in order to hit quality short shots. Some teachers emphasize steepness as the way to optimize contact; others favor a shallower swing. In my opinion, relying too much on either is what produces the skull, thins, fats and dropkicks common to amateurs’ short games. Here’s when 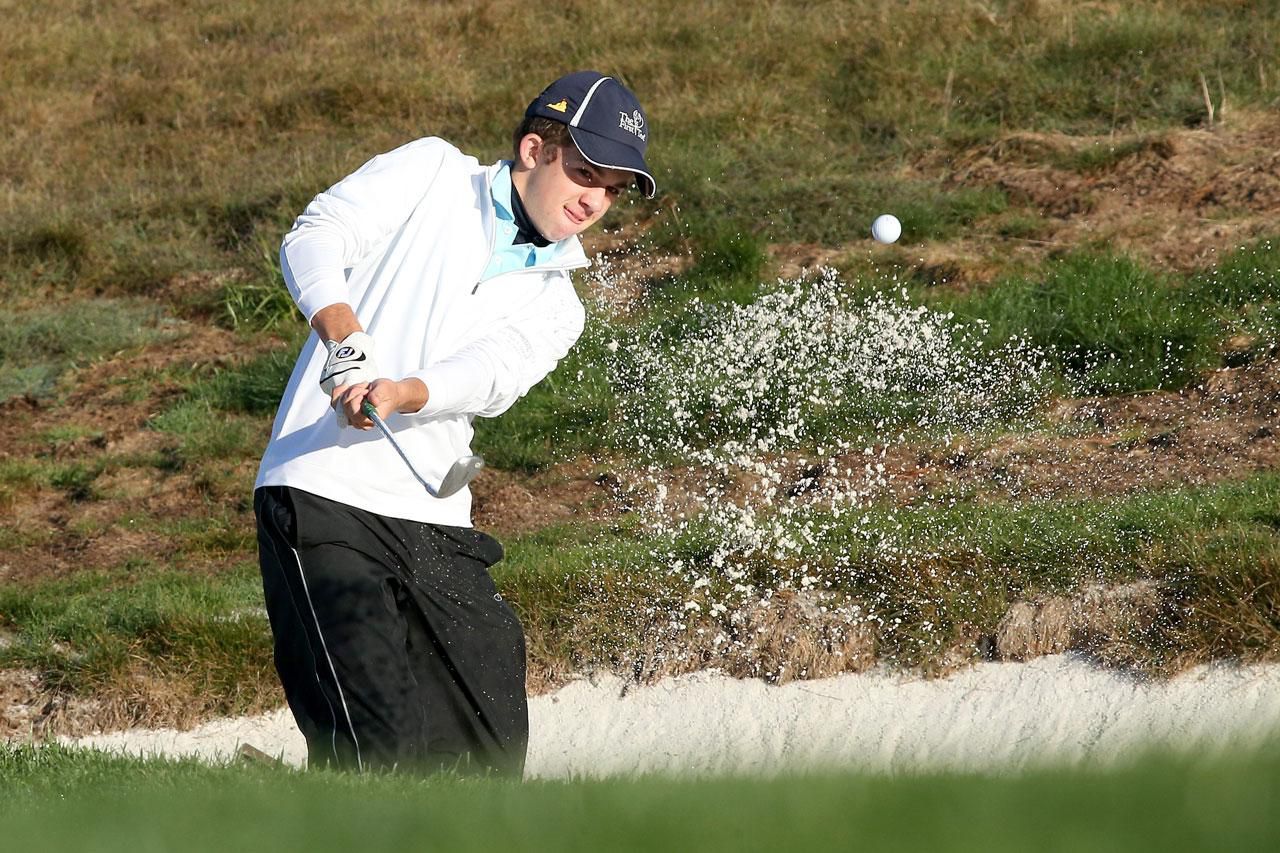 There are two points of contact when you hit any type of short-game shot. One is when your clubhead strikes the ball, and the other is when your clubhead strikes the ground. If there’s anything I’ve learned in my 20-plus years of coaching, it’s that you have to optimize both in order to hit quality short shots. Some teachers emphasize steepness as the way to optimize contact; others favor a shallower swing. In my opinion, relying too much on either is what produces the skull, thins, fats and dropkicks common to amateurs’ short games. Here’s when to be steep and when to be shallow—and when to be neither—in your short-game swing to catch shot crisp for easy up-and-downs.

Step 1: Set up for Ball-First Contact (STEEP)
It’s critical that you establish the low point of your swing arc in front of the ball with your setup. Copy the positions you see here (and pictured at left).

1. “Stack” your head directly above your belt buckle, not behind it like you do on full swings.
2. Keep your shoulders relatively level and your arms soft.
3. Take a weaker hold, or what I call a “finesse grip”, with your trail hand.
4. Take a narrow stance with your back foot square and your lead foot flared out toward the target. A line drawn across your forearms should point left of the target and match your toe line.
5. Bend over until you feel like a laser been shooting out from the middle of your sternum would light the ground just in front of the ball.

This setup, regardless of where you position the ball in your stance, will allow you to strike the ball cleanly when you following the other four fundamentals.

Step 2: Swing on Plane (NEUTRAL)
Poor short-game players and nearly everyone who suffers from the chipping yips typically deliver the clubhead to the ball from under the natural swing plane (defined by the lie of the club at address) and with a closed clubface. When you’re inside and shut, you need about ten different manipulations to effectively strike the ball before contacting the turf. An on-plane swing requires zero manipulation. My advice is to swing the club on the shaft plane established in address or slightly above it. Rehearse this by swinging in front of a mirror, or have a friend videotape your motion from a down-target perspective.

Step 3: Rotate the Clubface (SHALLOW)
Allowing the clubface to rotate open during your backswing facilitates releasing the club and activating the bounce on your wedge through impact. It’s a swing-shallowing move because if you fail to open the clubface, you have to hold off your release (otherwise the ball will shoot out to the left), a move that sharpens the leading edge and makes it very likely you’ll dig the club into the turf. While this isn’t always a bad thing, especially on shots from semi-rough, it’ll tear your scorecard apart from tight greenside lies. The professional golf world is littered with players who are great chippers on the mini-Tours, but can’t chip or pitch it a lick on the PGA Tour because of the tighter conditions. The solution: rotate the clubface open.

Step 4: Release the Clubhead (SHALLOW)
A club that’s released naturally is shallow compared to one that’s held off. This doesn’t mean that you flip your hands at the ball; rather, it means that you swing the club in a relaxed motion and in the correct Kinematic Sequence. I call it a “finesse swing.” The feeling you’re after is to have soft and relaxed arms that swing the club past your lower body while your chest smoothly rotates toward the target at the same pace. Your lower body is there simply to provide balance and to support your motion. If you do it correctly, the clubface will point slightly skyward at the finish, and the grip of the club will point at your belly button.

Step 5: Get Your Energy Moving Toward the Target (STEEP)
It’s critical that the energy in your finesse wedge motion flows toward the pin, not only in your downswing, but also in your backswing. All great wedge players, past and present, move their head a few inches toward the target on their backswing, then leave it there or move it even further forward on the downswing. Obviously, this means weight (i.e., swing energy) is shifting in that direction as well. No one ever teaches this, but it’s a fundamental key for stopping fat and thin contact (what you get when your head moves away form the target). Picture how you toss a ball underhanded: You start in good balance, you swing your arm back and through smoothly, and your energy (either your head, torso or both) moves slightly toward your target.