A video captured the angry crowd as it swarmed a football field to protest a penalty flag. A man grabbed the referee from behind and body-slammed him onto the ground. The players, who looked on, stunned, were 13 years old. The assailant was a parent at his son’s youth football game in Albuquerque. The New Mexico Young America Football League responded by banning the entire team for the rest of the season. Parents there, as in many states, are required to adhere to a “Parents Code of Conduct” that includes abiding by statements such as “I will be in control 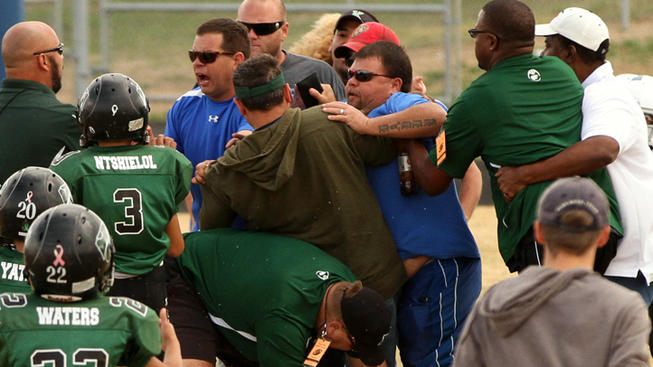 A video captured the angry crowd as it swarmed a football field to protest a penalty flag. A man grabbed the referee from behind and body-slammed him onto the ground.
The players, who looked on, stunned, were 13 years old. The assailant was a parent at his son’s youth football game in Albuquerque.
The New Mexico Young America Football League responded by banning the entire team for the rest of the season. Parents there, as in many states, are required to adhere to a “Parents Code of Conduct” that includes abiding by statements such as “I will be in control of my emotions” and “I will remember that the game is for our youth — not adults.” That pact had been broken.
Youth sports organizations are increasingly reporting scenarios in which parents yell, threaten or physically assault coaches, referees, players or other parents. A 2017 study from the National Association of Sports Officials, which represents youth, amateur, college and professional sports, found that 40 percent of officials named parents as the source of unsportsmanlike behavior.

“At our office, there is not a week that goes by that we don’t get video from parents of an 8-year-old playing soccer or football and the parent wants us to look at the call,” said Barry Mano, the president and founder of NASO.
Sports psychologists are now trying to better understand why a growing number of parents are becoming increasingly emotionally overinvested in their children’s athletics. They cite several reasons some parents take their child’s swim meet or soccer match very seriously.

Money is a top reason. Parents spend a lot of time and financial resources on youth sports, which can prompt some to want a payoff greater than watching their children perform well or enjoy themselves. Some expect a significant return on their investment, perhaps through a college scholarship or professional sports contract.
Parents’ behavior covers a wide continuum, said Travis Dorsch, an assistant professor and founding director of the Families in Sport Lab at Utah State University. On one end, “Mom and Dad are content to spend the money, and they are supportive and they don’t say a lot,” Dr. Dorsch said. At the other end, parents expect their child to perform well and express disappointment if their child or the team does not meet expectations. “In other families, little Johnny goes to Orlando for a tournament and doesn’t play, and on the plane ride home they have a discussion,” he said.

A 2016 study in the Journal of Family Relations by Dr. Dorsch and colleagues found an inverse relationship between a child’s perception of their family’s commitment to youth athletics and their enjoyment of the sport. The study examined data from a national sample of 163 parent-child pairs — 78 fathers and 85 mothers. The families were fairly affluent, with a median income topping $120,000 a year, and more than three-fourths of the parents had a college degree.

Parents reported spending an average of $1,583.89 a year on their child’s sports participation, though that ranged widely, with some reporting they spent more than 10 percent of the family’s gross annual household income on their children’s athletic activities. Families tended to spend more on their sons than daughters.
But spending more on the sport didn’t predict a child’s enjoyment of that sport. Rather, children who perceived their parents as investing heavily in their sport tended to report a greater sense of parental pressure and a reduced sense of enjoyment.
Stacy Warner, an associate professor and graduate coordinator for sport management at East Carolina University, says a desire to belong is another reason some parents become emotionally overinvested in their child’s sports. Traveling to tournaments and other investments of time and money can produce a tribal effect and sense of community.
“Humans have an innate need to belong to community,” she said. “Places where people meet are dwindling. What we have left is sport.”
For parents who build a social life through their child’s sports, Dr. Warner said there is a strong desire to protect their position within the community. It is, after all, a community membership that can be withdrawn if a child does not make the league or the team is cut early from a tournament. A desire to remain with the social group can produce a strong emotional response if a parent perceives that a referee makes a bad call or a child plays sluggishly.
“Parents want their kids to constantly be involved, to make that ‘A’ team so they can continue to travel and do these things because it’s their community,” Dr. Warner said. “If their child is cut from the team, their social circle will look very different.”
A desire for community, as well as a need to see a return on investment, is not limited to children’s sports participation. Dr. Dorsch’s laboratory is also testing parental emotional involvement in the performing arts, such as musical theater, orchestra and dance.
“We have data that we’re digging into that shows a very similar pattern,” Dr. Dorsch said.
It’s a pattern that sports organizations and officials wish to stop. Mr. Mano, the founder of the National Association of Sports Officials, said many leagues now escort referees into games. Others require parents to sign a good behavior agreement, in which the penalties for violation can range from a parent being banned from the stands or a team being barred from finishing the season. Other leagues do not allow any parents into specific games or entire tournaments.
Although most organizations try to manage parents’ behavior, Dr. Warner said the solution comes from providing a sense of community outside of children’s activities.
“If parents had adult sport league practices, maybe they wouldn’t sit around and watch their kids practice,” Dr. Warner said.