I read this article by Los Angeles Times sportswriter Eric Sondheimer. It’s a tremendous article, and he is RIGHT ON with “sounding the alarm” regarding the bad behavior of student-athletes these days. There is a phrase in the article that really got me thinking, and prompted me to write this article. He says, “What’s so baffling is why athletes no longer fear their coaches.” To me, someone who has been coaching high school football for 15 years, it is not baffling at all. Here are three reasons coaches aren’t respected like the old days. Parents One time, when 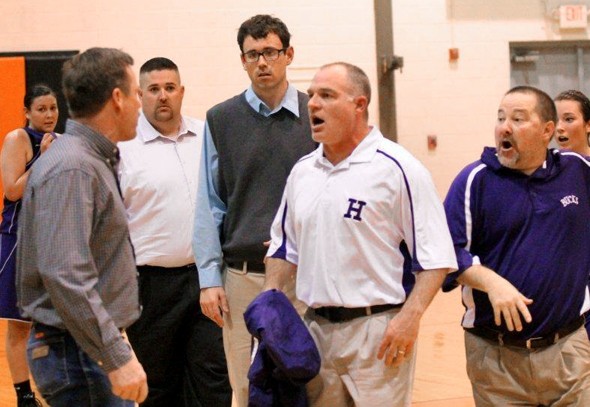 I read this article by Los Angeles Times sportswriter Eric Sondheimer. It’s a tremendous article, and he is RIGHT ON with “sounding the alarm” regarding the bad behavior of student-athletes these days.

There is a phrase in the article that really got me thinking, and prompted me to write this article. He says, “What’s so baffling is why athletes no longer fear their coaches.”

To me, someone who has been coaching high school football for 15 years, it is not baffling at all.

One time, when I was about 14 years old, I threw my bat after striking out. My mom marched right down from her uncomfortable wooden bleacher seat, and pulled me out of the dugout, and ripped me a new one. Then she told the coach I couldn’t play the rest of the game. Do you think he questioned her?! Nope! My butt rode the pine for the last three innings. She ripped in to me right there in front of my teammates, my coaches, the opposing team, their coaches, the umpires, the birds, and everyone else! That was 1989. My friends STILL talk about that. Where are those parents today?

Do you think I ever threw my bat again? Absolutely not!

It ALL starts at home, period. I grew up playing youth sports in the 1980s, high school sports in the early 90s (born in 1976). I learned very early on from my parents that the coach was always right. This isn’t true today. Today, coaches just are not respected like they were for many decades.

It goes hand in hand with the respect that all leadership positions have these days. It’s not just coaching. Look at how college presidents are respected now days? Students storm their offices to demand change, and won’t leave until they see change. Again, this starts at home.

I was disgusted to see a large brawl in the stands of a youth football game this past season. PARENTS fighting in the stands. It is almost common place now to see this type of phone camera footage. It doesn’t shock us anymore. So, when parents in the stands are fighting, what are the kids going to do?

I’ve been questioned many times by parents about my decision regarding playing time for their kids over my 15 years of coaching high school football. That trend has most definitely gotten worse from year 1 to year 15. The decision-making of coaches is questioned today like never before. With parents questioning coaches, kids lose respect of those coaches.

Administrators are wavering of their support for coaches to keep their jobs in some situations. They are being swayed by parents so that they remain popular. Some administrators would rather fire a coach who has done a great job of teaching kids, and running their program then deal with parents who are not happy with their kid’s playing time. Athletic directors and principals are making quick decisions to cut a coach loose to keep parents satisfied.

Pacifying parents like this is a short term solution to a long term problem. Without a proper and respected chain of command, when parents have the principal on speed dial, coaches are not respected. Look no further than a Teacher of the Year candidate from San Diego who was fired this offseason.

Several years ago when I was a head coach, I had a player miss practice. The result of missing a practice during training camp was having to make that practice up through physical conditioning. This was in the handbook that players and parents had received before summer football practice began. It was written policy. Parents signed off on our expectations, players signed off on our expectations. A player wasn’t allowed to start in a game until they made up their missed practice.

This player was making up his absence by doing a series of up downs, pushups, sit-ups and sprints. This was supervised by our coaching staff. I was called a “bully.” I was called a bully for holding this student-athlete accountable for missing practice. I was called a bully for making the kid do these exercises. I wasn’t even the one supervising him doing this workout. I was helping students with their gear, fixing helmet buckles and chinstraps. But this family member came right up to me, in front of 15 of my players, and started yelling at me for bullying this kid.

Coaches are not allowed to hold their student-athletes accountable anymore. Raising our voices to get the attention of an athlete is called bullying. Motivating with persuasion to give your best is called bullying. Coaches are called into the administration building for simply doing their job to create the best team that they can. Coaches are confronted in grocery stores by parents over their coaching strategies, and told not to talk to their son at all. How can you coach a kid without talking to them?

In 1954, legendary coach “Bear” Bryant held a training camp in a rural area away from the campus of Texas A and M in an effort to “toughen up the boys.” The camp started with about 100 players. It ended with about 35. It’s a famous story about the “Junction Boys,” even turned in to a movie. One year later they did not lose a game. Coach Bryant is one of the best football coaches in our nation’s history. If he held that camp today, Bear Bryant would be arrested, and sent to jail for a long time. I’m not agreeing with many of the tactics used by Bryant, like not allowing water. He did some absurd things. My point here is that political correctness has created a “soft” environment, and is third main reason that coaches are not respected like the good old days.

Author Chris Fore is a veteran football coach and athletic director from Southern California. He has a Masters degree in Athletic Administration, is a Certified Athletic Administrator, and is on the California Coaches Association Board. Eight Laces Consulting, his business, provides dynamite resources for coaches. He is the author of An Insider’s Guide To Scoring Your Next Coaching Job, Building Championship Caliber Football Programs, and the Outside The Lines Manual for Football Coaches.