SHOULD YOUTH PLAY SPORTS DURING THE OUTBREAK? The answer is for now, in most settings, no. On March 15, the Centers for Disease Control and Prevention urged ending gatherings of more than 50 people through May 10 to stop the spread of the virus. President Donald Trump has since recommended gatherings should be limited to 10 people through at least March 31. Many states are closing schools, bars, restaurants, gyms and other gathering spots. In its coronavirus materials, the CDC offers guidance for school settings and community and faith leaders but nothing specifically for sports settings. However, the CDC says that the virus gets spread 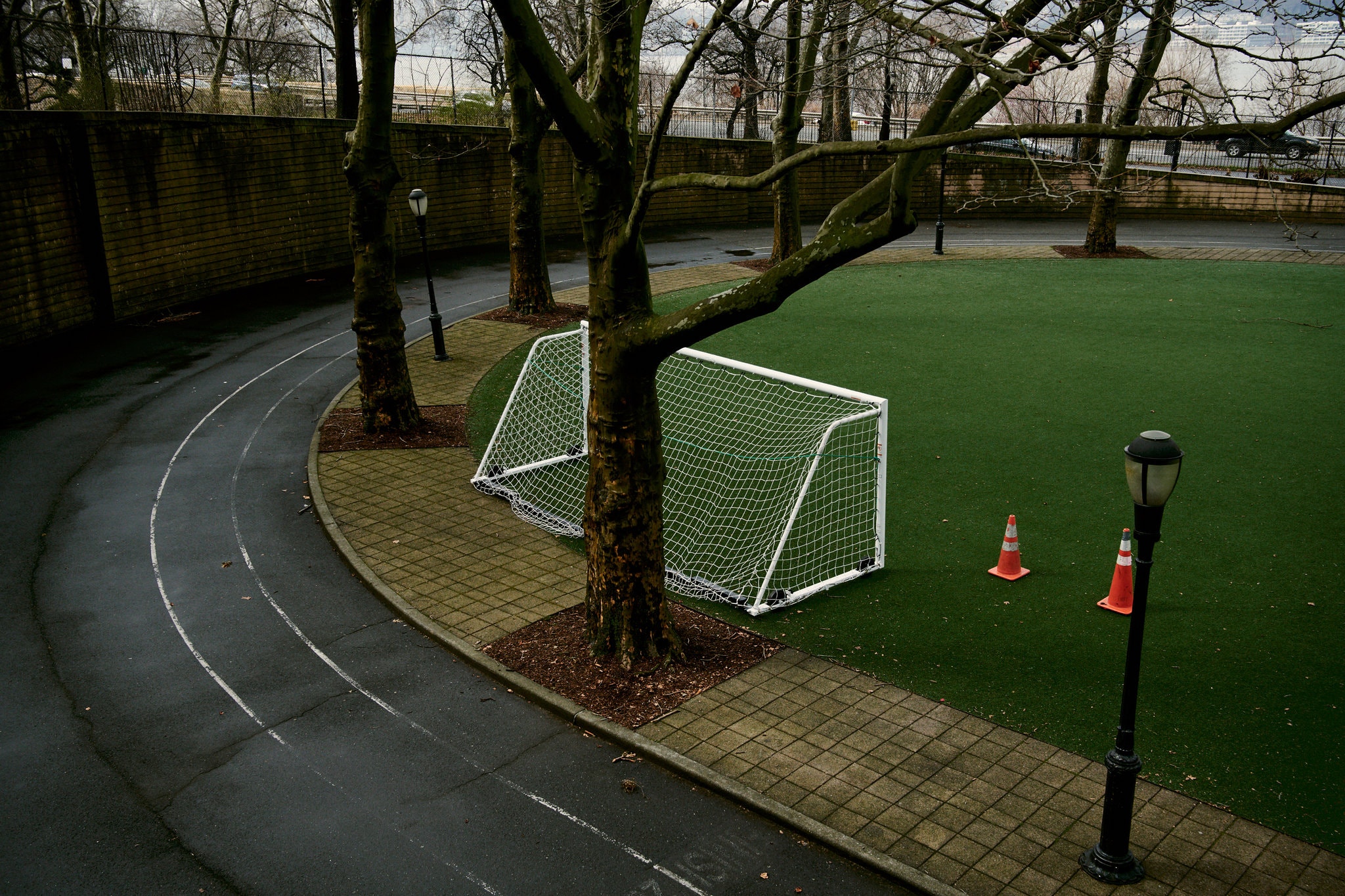 SHOULD YOUTH PLAY SPORTS DURING THE OUTBREAK?

The answer is for now, in most settings, no.
On March 15, the Centers for Disease Control and Prevention urged ending gatherings of more than 50 people through May 10 to stop the spread of the virus. President Donald Trump has since recommended gatherings should be limited to 10 people through at least March 31. Many states are closing schools, bars, restaurants, gyms and other gathering spots.
In its coronavirus materials, the CDC offers guidance for school settings and community and faith leaders but nothing specifically for sports settings. However, the CDC says that the virus gets spread most frequently among close contacts within about 6 feet — distance that is hard to create in team and some individual sports. Transmission of the virus occurs much more commonly through respiratory droplets than through contact with contaminated surfaces.
In areas where the risk of transmission is high, the CDC recommends the cancellation of community gatherings of any size. So far, coronavirus cases have been found in nearly every state, and at least 20 states and Washington D.C. have issued a state of emergency. The coming weeks are critical in limiting the spread of the virus, which is highly contagious.
On March 13, Sports Illustrated published a Q&A with two doctors on what types of sports activity might be acceptable to participate in. But note: That was before a national emergency was declared by the federal government. The gravity of the crisis, and the importance of social distancing, has only grown since then.
“I absolutely urge all youth sports programs to take a temporary pause for at least two weeks and then reevaluate the situation,” said Dr. Neeru Jayanthi, a sports medicine physician at Emory University who was an adviser on our Healthy Sport Index. “It is so critical to play each of our parts in our efforts to contain this deadly virus.”
Children appear to be less likely than adults to suffer severe complications from the coronavirus, according to the CDC, though it remains unclear whether those with underlying conditions are at elevated risk. The greater concern, said Dr. Andrew Stolbach, an emergency physician and faculty member at Johns Hopkins University School of Medicine, is that youth will become a carrier for the virus and pass it on to their parents or grandparents.
“We don’t need organized sports now,” said Stolbach, who coaches his son’s wrestling team, which canceled its final state tournament for the weekend of March 14. “This is especially true if you take a bunch of kids to a travel tournament and they stay at hotels. Now we’re just mixing a lot of people again, when what we’re trying to do is slow the trajectory of the virus. Also, hospitals may eventually need auxiliary spaces for patients such as hotel rooms.”

HOW CAN PARENTS KEEP KIDS PHYSICALLY ACTIVE IF SCHOOLS AND SPORTS ARE CLOSED?

Sara Poehlman, a nurturing care expert who works on emergency education and parent programs, stressed that children must move to ensure their physical and mental well-being. “Especially if children are doing distance learning via computer, movement in between periods of study is essential to ensure focus, concentration, and sustained attention,” she said.
Physical routine recommended by Poehlman includes running around the block, jumping jacks, yoga, or a dance party. Screen time may seem like a solution to keep children occupied, but it can be detrimental to their mood and energy when used for a prolonged period of time, she said. Poehlman recommends short intervals of screen time (no binge watching) and to select content that motivates physical activity (dance like a YouTube star) or reinforce learning themes and skills.
“Boys and girls need free, unstructured time for play,” Poehlman said. “If they do have worries, play can be a strategy to work them out. If possible, small groups of children could get together for social learning and play.”
Jayanthi recommends playing in the yard or basement, doing individual activities such as running, riding bikes or playing tennis in an isolated environment. “Do not perpetuate mass gatherings in the hope we can wish away this virus,” he said.
Stolbach advises many of the same activities as Jayanthi. Also: kicking a ball (instead of throwing it, which involves touching of the hand) and organizing a small group of neighborhood kids to play outside while using your best judgment. He cautions against using this time to continue specialized training in sports.
“It’s hard to say you can’t go do batting practice on your own,” he said. “But the more you’re in a public indoor facility that involves a lot of touching, like touching the bat and opening the gate, the more you’re kind of violating the spirit of the physical social isolation we’re trying to encourage in the next few weeks.”
Avoid settings where equipment is shared, including gyms and playground installations.

WHAT ARE WAYS THAT YOUTH CAN EMOTIONALLY COPE WITH THE LOSS OF SPORTS?

This is going to be a difficult and disruptive time for all youth. For those children who play sports, the loss may be even greater and could contribute to higher anxiety and depression.
“The way athletes cope with life is through their sport,” said Dr. Rob Bell, a sport psychology coach. “If sport is okay and we are performing well, then life more easily works itself out. It is when we have severe on-the-field or off-the-field issues that cause our stress levels and anxiety to spike. You’ll need to treat this crisis as a major loss and/or death because the emotions experienced will be similar.”
Bell said that athletes will probably experience sadness, mood swings, or lack of initiative – and that’s normal. The key is to recognize there is nothing wrong with you and allow some time and space every day to grieve. “The worse thing is to simply ignore the emotions you’ll feel because then they will pop up when we least want them to,” Bell said.
Athletes are creatures of habit and crave structure and discipline. So, practice self-care. Keep consistent sleeping schedules. Continue exercising. Eat well and stay hydrated. Maintaining a structure to stay healthy will help avoid athletes going on huge binges of screen time or eating unhealthy food.
Athletes should also stay connected with others virtually. “If I am able to focus on helping someone else out, someone less fortunate, or even connecting with a friend, then I am no longer dwelling on my own problems and circumstance,” Bell said. “If I can focus on others, then the person I am really coaching up is myself.”
Coaches and parents can help too. Positive Coaching Alliance has tips to help young athletes socially and emotionally during the pandemic.

COACHES CAN:
• Organize Google hangouts as a way for teammates to connect.
• Encourage players to communicate about individual workouts they are performing to keep each other motivated.
• Consider having their team watch a sports movie and then come together virtually to discuss the lessons learned.

PARENTS CAN:
• Set up routines (schoolwork in the morning, “recess” in the backyard) to help normalize the situation as much as possible.
• If it allows, play with your child in the sport of their choice in the backyard or driveway, or practice certain skills and drills within the home if possible.

And remember, if you’re an athlete, “be courageous about asking for help,” according to PCA. If you are feeling overwhelmed, anxious, fearful or depressed, let one of the adults you trust know. Be honest with them. Don’t hesitate to ask for help for fear that your concerns aren’t important.

WHAT CAN ADULTS DO NOW TO PREPARE FOR WHEN GAMES RETURN?

No one likes sitting still. The reality is we’re likely facing a lot idle time before kids are playing organized sports again. Take advantage of this time. It’s a valuable opportunity for parents, coaches and administrators to learn new skills and knowledge that better serve young athletes.

PARENTS CAN:
• Reintroduce free play. Gone for now are the never-ending hectic sports schedules while eating dinner in the car. With organized sports on hold, take advantage of this time by encouraging your child to creatively enjoy sports (while maintaining appropriate social distancing). Project Play’s Reintroduce Free Play page offers tips. NBA star Trae Young’s #InHouseChallenge has upped the ante of what you can do while inside. Let kids play on their own terms, and they will.
• Reexamine your own balance with sports – and that of your child’s. This is a good time to take a deep breath. Talk to your child, and think to yourself, about what he or she is getting out of sports. Is your child having the best experience possible? Have you followed your child’s lead and asked what he or she wants? The Project Play Parent Checklists can help you navigate the often confusing world of youth sports. If your child is specializing in one sport all year, check out the Healthy Sport Index for other sport options to help avoid overuse injuries and burnout while supplementing skills in your child’s primary sport.

COACHES CAN:
• Get yourself trained in coaching kids. A good coach sees the potential in every child. Yet less than three in 10 youth coaches have been trained in the past year. It’s not easy finding time as a volunteer. Take time now to become a better coach at preventing and treating injuries, teaching age-appropriate skills, and communicating in the best way to youth. Even if you’ve been trained previously, online courses such as these provide a great refresher and the ability to learn more.
•
o   How to Coach Kids (via Project Play, Nike and U.S. Olympic & Paralympic Committee)
o   U.S. Soccer
o   USA Baseball
o   USA Softball
o   USA Basketball
o   USA Football
o   US Lacrosse
o   U.S. Tennis Association
o   USA Volleyball
o   USA Track and Field
• USA Wrestling