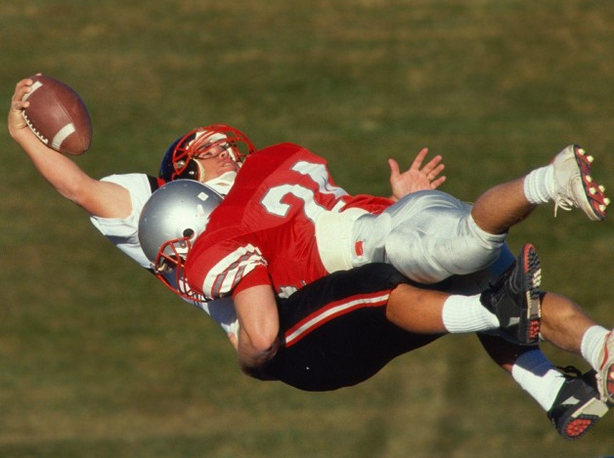 Arguably the toughest job in football is defensive coordinator. They spend weeks preparing for new types of offenses while continuing to improve their players’ fundamental skills. One week they may face a four-wide team that throws 70 percent of the time, then turn right around to play a triple option team in the following game. It can easily become a nightmare.

So, to make the job easier, a defensive coach should implement solid tackling drills. Great tackling skills can guarantee a successful season, because a fundamentally sound tackling team will play great defense.

Show me a team that misses a lot of tackles, and I’ll show you a team that’s probably not very good on defense. Improve your team’s tackling skills, and you will improve your team’s defense. I believe tackling should be a focus of every defensive practice, even on walk-through days. You don’t have to do live hitting to improve tackling skills. Several tackling drills require no collisions at all. Below are some tackling drills and skills you can use during your next practice. Focus on technique and safety at all times. Poor tackling technique not only leads to bad defense, it can also lead to serious injury.
Tackling Skills

No player on defense should ever be standing straight up, and the same applies to a player who is about to tackle. A player can generate much more power on a tackle from a squatted position. So always focus on being as low as possible.

If a player is making an open field tackle, have him focus on the ball carrier’s belt. The belt will tell the tackler exactly where ball carrier is going. Too many times, defensive players look at the eyes or the feet and get faked out by false movements or jukes. The hips lead you to the ball.

One of the most dangerous things a player can do on a football field is lead in on a tackle with his head down. Parents place their trust in coaches to keep their children safe, and a player can get seriously hurt if he hasn’t been taught proper technique. Always make sure that your players can see what they hit. If they see grass or cleats when they hit, they’re not using proper form.

This last skill is the reason why I believe the Power Clean is the most valuable lift for football players. Think about proper Power Clean form. It applies directly to tackling. Low center of gravity, explode up by using the hips, and finish. This is exactly how I teach tackling. You want your players to explode into the opponent by using his hips and complete the takedown by wrapping up the opponent and dumping him to the ground.
Tackling Drills

Now that you know the skills your players need, here are four basic tackling drills to incorporate into your next practice.

In this tackling drill, have an offensive player stand with a dummy about two feet in front of a defensive player who is in a six-point stance (hands, knees, and toes on the ground).
On the whistle, the defensive player explodes his hips and throw his hands into the midsection of the dummy.
The defender’s elbows should remain in and tight, about shoulder-width apart, and his hands should be under the armpits of the dummy.

A ball carrier and a defensive player stand about 10 yards apart with a cone about five yards at a diagonal from them.
At both half speed (about 3/4 max exertion) and full speed, the players run to the cone. Watch the technique of the defensive player to make sure he is applying the four skills.

Lay a tackling dummy down sideways on the field about five yards in front of a ball carrier. A defensive player stands about two yards behind the dummy in a two-point stance.
The ball carrier jukes to one side of the dummy. Focus on the technique of the defensive player.
Note carefully: Did the defender read the hips? Did he lower his pad level? Did he have his head up? Did he explode and destroy?

This is a really good tackling drill for linebackers and defensive backs.

All great defenses swarm the ball. They don’t rely on only one person to make the tackle. This is a good drill to run in team defense.
Have an offensive player run to one side the field. Before you stop the play, all 11 players on defense must put a hand on the ball carrier.