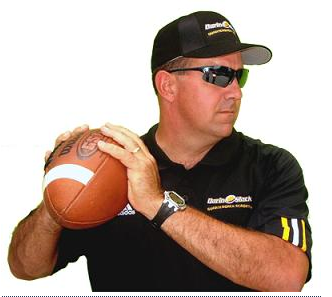 There’s an old coaching adage that “you can’t change a throwing motion! A quarterback either can throw or he can’t. Period.”

You hear this all the time, this idea that a quarterback’s mechanics can’t be changed. Commentators, football dads, and coaches proclaim, “It’s impossible to change a quarterback’s throwing motion. Just coach his footwork.” Older quarterbacks in particular get subjected to this tunnel vision.

It says more about the coaches than it does the kid. The message it sends, however, is that, “We don’t have time to improve a kid’s throwing mechanics. Or we don’t know how — we don’t have the technical skills needed to coach them up. Why bother if we can just go find another kid who can already throw it better, without coaching”?

But what is passing talent? The mentality that some kids “have it” while others don’t shouldn’t apply to throwing in the same way it might to raw speed or quickness. Yet it comes up so often. There are many high-profile “athlete-quarterbacks” who are world-class athletes but aren’t very accurate. They can throw a spiral and an accurate pass or two, but because of their latent talent the theory is that the best thing to do is just to “let them play” and the last thing you should do is “overcoach” them. The old myth comes back: Just coach their feet; ignore the upper body.

But that’s only the most high-profile example. There are thousands of high school kids that receive almost no coaching of their passing mechanics. At best they get a few throwing drills. The result is thousands of young players who are given no the opportunity to develop. For the great-athlete quarterbacks, the lack of coaching puts a cap on their success and hurts their team’s passing games. For the less talented kids, they simply never see the field or get moved to new positions. If they ask for help, it’s that same refrain again: “Let’s work on your footwork.” Yet aren’t the feet are the farthest appendage from where you throw a ball from? Don’t you throw it with your arm?

Lack of coaching or not, the expectations remain: Perform at a high level or face criticism or the bench. The “can’t coach a throwing motion” myth prejudices the careers of many young men. Not all quarterbacks make it to the NFL but all want to succeed. Ignoring the upper body is like only coaching half the kid.

Ironically, the same coaches who preach a “footwork only” gospel also throw out plenty of meaningless buzz-phrases in lieu of actual coaching: “Follow through,” “Come over the top more,” “Raise your elbow,” “Turn your shoulders more.” This double standard of non-coaching and coaching-via-cliché is confusing — for both the coach and the kid.

If all you know are the same old cliches then you’re insulting your players’ intelligences, and if you’re insulting their intelligences then, over time, you will prove yourself to know very little. Because the stuff you’re saying won’t work. It might work a time or two, but you won’t have all the answers, as so much of it will be guessing on your part. And once that happens the players will start just fiddling with it themselves, drawing their own ad hoc conclusions about what works best. The result is typically not pretty.

Can you improve a quarterback’s throwing motion? Yes, but it’s important to use the right methods. As stated above, the old way is to focus on footwork only and then sprinkle in clichés throughout practice. Our way is different. We teach quarterbacks to “self-correct, not self-destruct,” through a central focus on the arm. We do this by teaching simple biomechanics concepts that are universal and non-negotiable, and yet provide powerful results that inform the footwork to support the entire process.

Here are two simple biomechanical examples to improve a throwing motion in the wrist and elbow. The wrist should be pronated, or turned over, on the release (see the images below), yet there are countless ways the wrist can move and only some are correct — the bad variations can create problems.

If we reduce the wrist’s ability to “change” position, we make it more efficient on the throw. How is this done? The adjustment is simple. Hold the ball at the pre-pass pass position and cock the bottom end of the ball outward at a 45 degree angle off the body (see the image below), making sure that the point away from you doesn’t go above parallel to the ground. This “cocking of the wrist” reduces joint movement, presets wrist pronation, increases the ball’s spin rate when thrown, and increases ball control with the fingers.

The second aspect we’ll look at is the elbow. This is the joint that can cause the most problems for the throwing motion. The elbow must “lead” the throw. Most coaching suggests that if the elbow is simply above the shoulder — or “comes over the top” — as it comes forward in the motion, then it is sufficient. Yet in their effort to keep it simple coaches are missing a significant opportunity. We throw with muscles, not joints.

For the torque of the body (i.e. the force created when a passer twists as he releases the ball) to pass through the arm it is necessary to align the joints in the best possible position, at the right moment, to use the arm’s muscles properly. If the elbow is merely “above the shoulder” there is no guarantee that the thrower will achieve proper bio-mechanical position. But what is this “best position”?

Take your arm and, as if you had a dumbbell in your hand, do an over-the-shoulder tricep extension. Did you notice where your elbow ends up? Roughly six inches forward of your shoulder in a slot called the angle of the scapula (or in line with your shoulder blade curving around from the back — see the image below).

The name we use for this position has orthopedic foundations. We call it “zero” because it is “muscular neutral.” It is the safest, strongest position for the arm to be in, as there is no stress on the shoulder joint muscles, the front or the back. It is the perfect “middle point” in the throwing motion. This should be the location of your elbow at the exact moment your chest and hips are square to the throwing target. Everything in the turn up to achieving this position is about generating torque from the body and storing it, and everything after it is about releasing that stored energy through the tricep. Simply put, it is the lead position of the elbow on a throw.

During the motion, if your arm is too low or not far enough forward of the shoulder to be able to achieve the “zero” position then there are a series of adjustments your brain will make automatically to compensate for your poor arm alignment. None are really optimal. The brain “locks” the shoulder to protect itself from the lower angle, which also forces the wrist outward around the elbow (sidearm delivery) to reduce exposure to injury. If your elbow is too high your wrist elevates too quickly; this creates the same effect, only higher. This side arm or slashing” release widens, or elongates, the intended target hallway. Of course that reduces accuracy but it also, more importantly, reduces the power you can generate with your throw.

Imagine trying to bench press a full set of weights over your belly button. You couldn’t do it because the angle is wrong: you can’t get your chest muscles involved properly. In the same way, if the tricep misses “zero” your arm muscles won’t fire efficiently and your power will be reduced. Understanding this feedback concept is a key part of self-correcting your throwing motion.

If the elbow hits “zero” at the right time then the tricep can release all the torque from the body. And the results can often be remarkable, because so few get there. It’s like a two people jumping on a trampoline together. When they hit at the same time, the smaller one flies much higher. The tricep is the smaller person that goes much farther with the help of our much larger body.

Just by changing two simple things in the mind, the feel, and with the timing of the quarterback’s motion, we can increase his consistency, power, and accuracy dramatically – and this says nothing about the feet. The feet will support everything I’m saying, but if the arm misses the “sweet spot” of “zero” on the release path, the footwork is irrelevant.

Here are a few images of some guys who understand this concept. They may not call it “zero” but they certainly demonstrate it.

We just applied two universal, non-negotiable, biomechanical standards to a throwing motion that will never change for any quarterback. An awareness of these standards will hold them accountable, not only in his motion, but in applying more complicated techniques on his own. Indeed just having these standards provides many benefits: they are useful because they are easy to follow and, when followed, they produce results that open the young man up to even more coaching because he sees that they work and becomes hungry for more. These, rather than empty phrases, equip athletes with the tools that can make them better, and they can understand that. The older alternative reduces confidence and increases over-thinking and hence confusion and hesitant play.

“Self-correction” is the lodestar of my system. This is what I aim to do with the throwing mechanics — show you how to apply clear standards like “zero” and the wrist to throwing the ball that produce measureable results. Yet there is very little quarterback coaching available to players on this level. I dream of a point where every team has a number of well coached kids who could all throw the ball all over the field if asked to.

Young quarterbacks, their fathers, and even quarterback coaches must do their homework on the quality of instruction offered by schools and camps, and whether they are capable of producing positive, sustainable changes. Just because a high school or camp coach worked with an already talented athlete doesn’t prove anything — it’s the same old approach with a new coat of paint. It’s time to dispel the myths; there’s a better way. You can’t start by talking about what can’t be done.