The high school football scout isn’t afraid to be honest — with himself or others Before Mark Porter could become the most honest man on Twitter, he had to be honest with himself. As a tight end at Kent State in the early 1990s, he was good enough to start as a freshman and, two years later, win the Don Nottingham Award as the offensive player who made the biggest improvement during the spring. Problem was, Porter was 6-2, topped out at 230 pounds and had chicken legs. Midway through his tenure, the Golden Flashes brought in a Canadian tight end 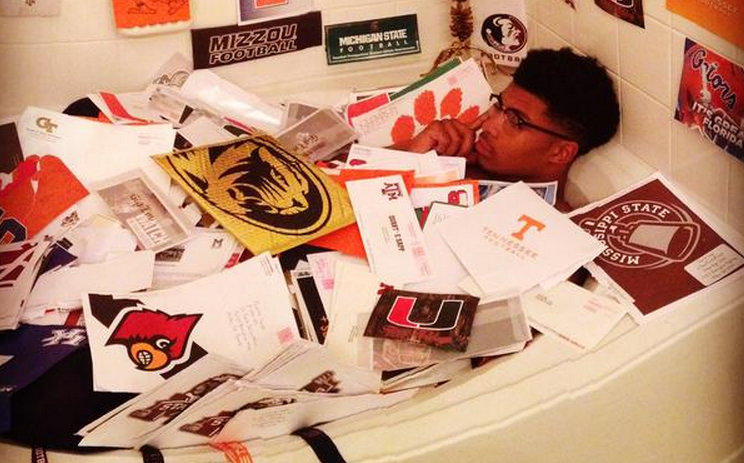 Before Mark Porter could become the most honest man on Twitter, he had to be honest with himself.

As a tight end at Kent State in the early 1990s, he was good enough to start as a freshman and, two years later, win the Don Nottingham Award as the offensive player who made the biggest improvement during the spring.

Problem was, Porter was 6-2, topped out at 230 pounds and had chicken legs. Midway through his tenure, the Golden Flashes brought in a Canadian tight end named O.J. Santiago who was 6-6, 250 pounds and could run the 40 in the time it took Porter to run the 30.

Guess which one the coaches preferred?

“I would have swore up and down I was being screwed,” Porter said. “I was like, ‘No way he’s better than me. He’s from Canada. He doesn’t even understand 11-man football. He can’t even catch yet.’”

Santiago eventually became a third-round draft pick of the Atlanta Falcons and spent more than a decade in the NFL. Porter eventually became … a ninth-grade football coach. In 2005, he founded the high school recruiting website ScoutingOhio.com and now spends the year traveling to dozens of high school games, watching thousands of hours of film and ranking hundreds of Ohio’s best players for colleges at every level.

It’s given him a keen eye for talent, which is bad news for the college version of himself.

“I got some of my Kent State films from a few years ago and I was lucky I ever played,” he said.

Consequently, he now understands both sides of the process.

“I understand these players and parents,” said Porter, whose site is free for players. “They were me. They’re the bitter guys that just don’t understand what a college coach is looking for.

Porter, who spoke at Monday’s Hall of Fame Luncheon Club, routinely posts about the recruiting process from his Twitter account (@Mark__Porter), but here are five tips for prospects:

Every third-grade football player dreams about playing for Ohio State, but unless you’ve been bit by a radioactive spider, it probably isn’t going to happen. Of the Buckeyes’ 26 recruits this winter, only five came from Ohio.

“Urban Meyer’s philosophy is, ‘Don’t make me watch film of a kid unless the NFL wants him in three years,’” Porter said. “He wants first-round picks with first-round tangible aspects. Ohio State is national. They go to the ends of the earth for future NFL picks.

“The joke about Urban is, ‘Why doesn’t he want to go coach in the NFL? Because NFL teams only get one first-round pick a year.’”

If you’re good enough to go to Ohio State (or Alabama or Notre Dame), you don’t need ScoutingOhio.com.

God has already done the work for you.

“If you’re a beautiful girl, you’re going to get a date for prom,” Porter said. “Even if you’re at a small school, if you’re beautiful, they’ll find you.

“And if you don’t have a date for prom? You can transfer four or five times to find the perfect offense to showcase your talent, but it isn’t going to matter. It’s like a girl trying to wear the perfect makeup or the perfect dress or the right purse. It doesn’t matter. You could hire this speed trainer or go to that combine, but it doesn’t matter. Everyone knows who the pretty girl is.”

That’s why it’s so crucial to be realistic. Although there are 717 Ohio high school football teams, the state only produces about 125 Division I recruits each year (and that number is dropping).

But there are hundreds of Division II and III players.

Porter breaks down recruiting into two categories. The one percent who get big-time offers based solely off their film — guys like Marshon Lattimore (the best player Porter has ever scouted) or Maurice Clarett — and the 99 percent that has to go to college camps in the summer.

“Your coach could hate you. You could be in the wrong offense. You could be born in a barn with no address. But if you show up at one of these college camps and dominate and beat the snot out of people, guess what? You’ve got a scholarship,” Porter said. “There are some kids where, you look at 10 plays on film and they’re so good, Ohio State or Kent State offers a scholarship. Everyone is else is in the other category.”

“These college camps are where the coaches say, ’Your coach says you run a 4.4? Come here and run a 4.4. I’ll give you the scholarship if you can do it,” Porter said. “Most of them can’t.”

“There’s six or seven months where all the kids should be doing is working out every day,” Porter said. “Like Rocky IV in Siberia.”

But what happens is, other companies enter the picture, persuading kids to come to camps and combines during that winter/spring dead period.

“If you’re a college player going to the NFL combine, you’re going to wait to work out at the combine,” Porter said. “You might even skip the combine to go to your pro day at your school to get more time to work out. But these companies want these kids working out as soon as possible.”

Those camps can’t get you a scholarship, Porter said, but if you test slow, they could cost you one.

There are recruiting services willing to call or email college coaches on behalf of your son … just as soon as your $1,500 check clears.

“These parents keep paying this money to tell him what I just told them: go to camp.”

Porter understands the lure of being a Division I prospect because he was a “Division I snob” himself in high school. But big-time Division II football in 2018 is as good as Mid-American Conference football in the 1990s.

“If I’m being honest, I’d be at Ashland or Tiffin now,” Porter said.

“You watch Rudy?” Porter said. “If you’ve seen Rudy, you know the only reason they like walk-ons is they don’t care if you get hurt.”

Preferred walk-ons are in a slightly better position, but you’re still paying to play football.

“The whole reason to get a scholarship is because full tuition is out of control,” Porter said. “Why would you go $20,000 into debt to try to walk on onto a team? It’s the hardest thing to do. You’ve got to beat everybody twice.

“I tell kids to go to the Division II school that’s invested in you, that wants you, that’s putting money into you, that when you fail, they fail. Because when you’re a walk-on who fails, they don’t even know your name.”