Millions of fans witnessed the Patriots' incredible victory in Super Bowl LI over the Atlanta Falcons, but many people might not be aware of the amazing cognitive ability that was required by each player to complete this great comeback. Let's break down the situations the Patriots faced on the field and how they overcame them to help you understand the importance of your mental game on the football field. Additionally, I'll provide tips to help you improve your own mental game and become a better football player. 1. Preparation During the weeks of practice prior to the 2012 Super 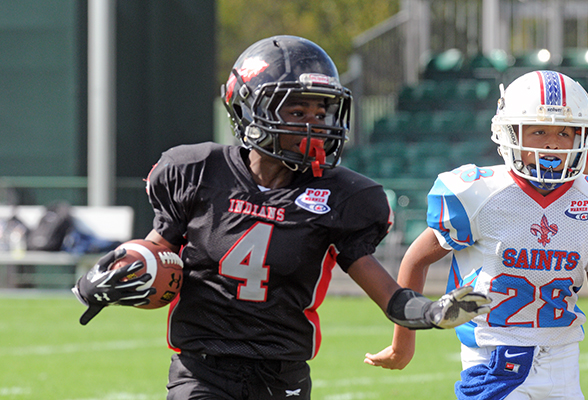 Millions of fans witnessed the Patriots’ incredible victory in Super Bowl LI over the Atlanta Falcons, but many people might not be aware of the amazing cognitive ability that was required by each player to complete this great comeback.

Let’s break down the situations the Patriots faced on the field and how they overcame them to help you understand the importance of your mental game on the football field. Additionally, I’ll provide tips to help you improve your own mental game and become a better football player.

1. Preparation
During the weeks of practice prior to the 2012 Super Bowl, head coach Bill Belichick made sure that the team was prepared for every possible scenario that could occur on gameday. Belichick even had his team prepare for an important situation that many coaches overlook: Halftime.

Halftime during a regular-season game is about 12 minutes, but the Super Bowl halftime can be nearly twice as long because of the star-studded musical performances. To prepare for this, just as he has done in the past, Belichick had his team go into the locker room for 30 minutes during the middle of practice to simulate the situation on gameday.

After the simulated halftime, the team came back out and continued to practice. This is something that a veteran team like the Patriots knew to prepare for, while an inexperienced/young team like Atlanta may not have.

Training Suggestion: Study, study, study. Watching film and reviewing your scouting report will help immensely on gameday. Sports, especially football, are like school: If you don’t study for your math test, you’ll probably fail. If you don’t watch film and properly prepare for your opponent, you’ll likely play poorly. You put in all the work in the weight room during the offseason to get to the fun part—gameday. Control what you can control, and take time to watch film so that you can play with confidence. Don’t let your teammates down because you were too lazy to study.

RELATED: How to Mentally Prepare for the Big Game

2. Emotional Control
After Tom Brady played a very “un-Brady like” first half of football, he could’ve easily got frustrated and packed it in after his soul-crushing pick-6 to Robert Alford right before halftime that put the Falcons up 21-0. Instead, Brady did what Brady always does. He kept his composure, remained calm and elevated his game to lead the Patriots to a 34-28 victory, securing his fifth Super Bowl title.

Training suggestion: Many techniques and types of technology can help with emotional control and remaining calm in stressful situations. I recommend Lucid, a mental training app that features audio recordings from Graham Betchart, mental skills coach/sport psychologist for professional athletes in every sport. It helps athletes enhance their emotional control through guided meditations.

3. Hand-Eye Coordination
During the Patriots’ game-tying drive, Julian Edelman made arguably one the greatest plays in Super Bowl history when he caught a deflected pass an inch from the ground while tangled up with three Falcons defenders. This required elite hand-eye coordination and anticipation. If Edelman lost focus for even half a second, the pass would have been incomplete and the Patriots would have flown home to Foxboro without their fifth Lombardi Trophy.

Training suggestion: A few technologies that I would recommend to all athletes (not just football players) who are trying to improve hand-eye coordination are NeuroTracker, Senaptec Strobe Glasses and the DynaVision D2 Lightboard. They can be expensive, but there are also many drills you can do to improve coordination, such as:

Playing catch with gradual progressions that increase the difficulty, such as incrementally decreasing the size of the ball (start off catching a football and eventually a golf ball).
Catching one-handed (start off catching with two hands, and eventually one-handed)
Mixing in vision-intensive drills (playing catch with a football and having the receiver read numbers/letters written on the nose of the ball before catching it).
Training with a reaction ball and catching footballs from a JUGS machine to help with reaction time and coordination.
4. Mental Stamina
Playing an entire football game is both physically and mentally exhausting, but the Super Bowl takes exhaustion to a new level. In the weeks leading up to the Super Bowl, players must do their best to remain focused and continue preparing for gameday despite the media circus and national spotlight they must endure at all times. It’s easy to see how a player could be overwhelmed and mentally fatigued come Super Bowl Sunday.

The Patriots had the mental stamina to overcome the events prior to gameday and to play in the biggest and most physically and mentally demanding game of the season in front of over 100 million viewers. Despite the intense pressure, they were able to perform at an elite cognitive level late in the fourth quarter, and ultimately make the championship plays to win in overtime.

Training suggestion: At Brain & Body Performance, I use NeuroTracker with my clients to enhance mental stamina. Intense focus for 8-second intervals over a 30-40 minute training period, is very difficult. This also translates great for football players, since plays only last about 6-7 seconds, and games can last several hours. Mental stamina and the ability to focus are keys for success on the field, as well as in the classroom and in life.

5. Recognition
The Patriots ran nearly twice as many plays as the Falcons (93 to 46), and had possession for twice as long (40:31 to 23:27). Toward the end of the game, the Patriots recognized that the Falcons defense was becoming both physically and mentally fatigued. The man-to-man defense that had worked earlier in the game was not as effective late in the fourth quarter when Atlanta’s defensive backs were exhausted and the defensive line could no longer generate significant pressure on Brady. The Patriots recognized this, took advantage, and executed.

Training suggestion: Recognition is possible through repetition at practice, studying and visualization. Visualization can help athletes get mental reps at home, and research has shown that it can positively affect performance: Both professional athletes and Olympians use visualization to prepare for games and competitions. The Lucid training app has guided visualization audio recordings, which I highly recommend.