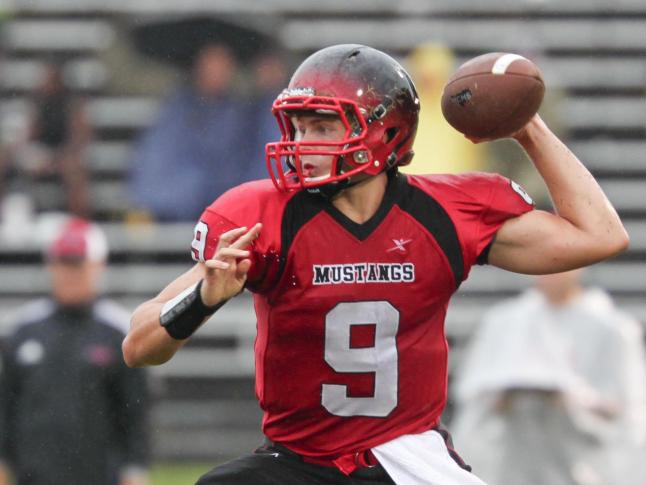 The West Coast Offense, as developed by former San Francisco 49ers head coach Bill Walsh, is a finesse offense that utilizes a short passing game designed to control the ball.

In most conventional offenses, the idea is to run the ball to draw the safeties and linebackers in closer to the line of scrimmage, thus opening up passing lanes for a vertical attack. The West Coast Offense does just the opposite, using a quick, horizontal passing attack to set up the running game.

The West Coast Offense employs a variety of formations and pre-snap motions designed to confuse defenders. It also relies heavily on an ability to flood a defense with more receivers than they can handle. The quarterback often moves around more than in a conventional offense with designed roll outs and bootlegs that are tied in with the patterns being run by the receivers.

THE OBJECTIVE OF THE WEST COAST OFFENSE
Spread the defense out horizontally as well as vertically, forcing slower linebackers into coverage.
Maintain possession of the football by utilizing a short passing attack almost as an extension of the running game.
Create mismatches with speed, size, or number of receivers.
Avoid tendencies that defenses can key on by throwing on any down and distance.
IDEAL PLAYER QUALITIES
Quarterback – More of a focus is placed on decision-making and accuracy over arm strength in a West Coast system. A quarterback must be able to choose from multiple options and deliver the ball quickly. Mobility is also a big plus.
Running Back – In the West Coast Offense, running backs are generally used more as receivers out of the backfield than in other systems, so you need a guy with all-around skills. Good hands and route-running skills are a must.
Tight End – The tight end’s role is generally that of a possession receiver and blocker. The ability to catch the ball in traffic is a huge plus.

Wide Receiver – With the focus on a short passing attack, precision and timing are of the utmost importance, so receivers have to run precise routes. Straight-line speed isn’t as important as an ability to separate in traffic. And an ability to make plays after the catch can turn a good receiver into a superstar in this offense.
Offensive Linemen – You’re generally not trying to pound the ball on the ground in the West Coast Offense, so guys who can consistently blow defenders off the line aren’t necessary. Actually quicker, more mobile linemen are ideal because of their ability to pull or get outside in a rolling pocket on plays designed to get the quarterback outside.