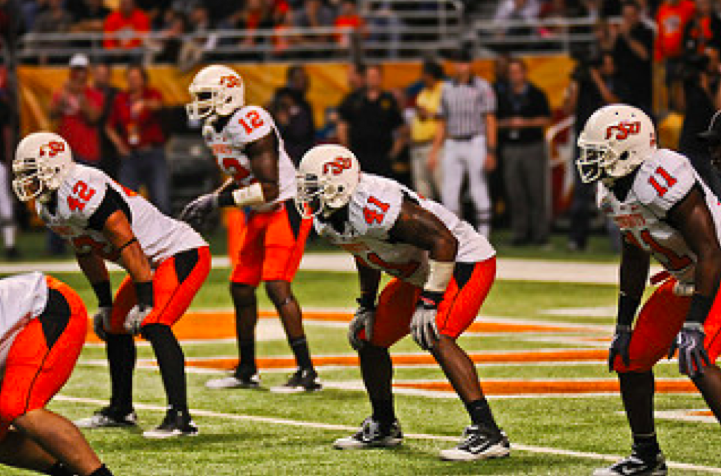 The requirements for a linebacker nowadays nothing less than close to a super-hero: One the one play he has to be able to take on a block from an offensive linemen, shed him and make the tackle near the line of scrimmage, on the next play he has to be able to cover a running back – often with the speed an agility of a wide receiver – just to rush the passer on another play, defeating the block of an offensive lineman with speed (and power) and then overpowering the running back to chase and tackle an elusive quarterback. And just as there are a multifold of abiblities requiered there are just as many linebacker drills to prepare the linebacker to fullfill his tasks.

Good agility is required for every position in nowadays modern football, but if there’s one position that needs it almost more than any other position then it is the position of the linebacker. Being able to run with tight ends, running backs or even wide receivers, wading through a sea of bodies already lying on the ground to quickly get to the ballcarrier before he can bounce the play outside the box. Or rushing and chasing the passer, agilily is what he needs.
✔ High Knees
✔ Wave Drill
✔ Square Drills

The success of a linebacker stopping a run play for minimum gain lies in his ability to read the play and react to it without hesitation. These linebacker drills prepare him to do his best on stopping the run.
✔ Piano Drill
✔ Shed And Throw
✔ Read The Play And React

Just as the defensive lineman has to work on his passrushing techniques the linebacker has to master these techniques just as well.
✔ Passrush Technique Drills
✔ Close Drill

In football it comes all down to blocking and tackling. For the defense, this means tackling of course. Getting to the ballcarrier or passer is just a precondition to make the tackle. But if the linebacker fails to make the tackle all his efforts to make it to the ballcarrier are for naught.
✔ Tackling Progression
✔ 2-Hits And A Tackle
✔ Angle Tackling
✔ Goalline Tackling
✔ Open Field Tackling

Especially playing against todays spread offenses the linebackers are required to play pass coverage just as well as the run. Only being prepared for this with good coverage drills gives him a chance to defend the pass successfully.
✔ Diamond Break Drill

Being in the right spot to defend the pass is an absolute must (see Linebacker coverage drills) but the making the interception and maybe returning it for as many yards as possible, maybe even a touchdown puts the icing on the cake.
✔ Angle Interception
✔ Tip Drill