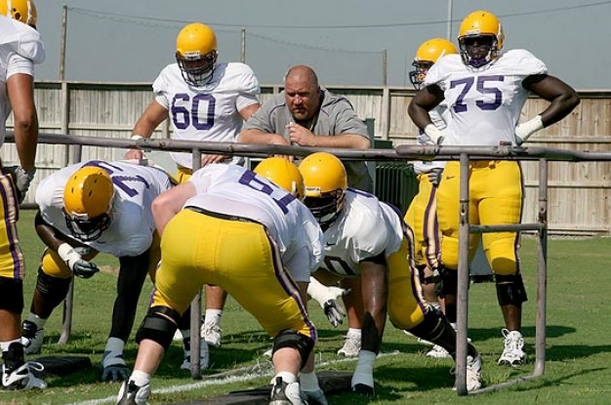 You can turn on the TV on any fall Sunday and see players like J.J. Watt, Charles Johnson and Jared Allen making plays all over the field; but what you don’t see are the endless hours of practice that refine the technique these players need to thrive. Although defensive linemen drills may sound boring, athletes who perform the following five drills tend to enjoy greater on-field success than they would without them.

Fighting with Your Hands

Randy White, the Dallas Cowboys Hall of Famer, was one of the first defensive linemen to use karate training, a discipline that has become more popular in football today. Hand fighting is a skill that all defensive linemen must learn. It can be done without pads on, making it ideal for spring workouts, especially at the high school level, where players may not be allowed to wear pads.

In this drill, two players stand across from each other at no more than arm’s length. The “offensive” player repeatedly attempts to strike the defender’s chest with his hands. The defensive player must react quickly to keep his opponent’s hands away. At no time during the drill should either player move his feet. Beginners should focus on knocking away the hands, but experienced players can practice more complicated techniques such as arm-overs and rips.

At some point, every player finds himself in a bad position. Learning to recover from a tough spot and still be a factor in the play can be the difference between stopping the runner after a five-yard gain or watching him haul it into the end zone.

Again, players pair up, playing the roles of offense and defense. The offensive player takes a firm grasp on the breastplate of the defender’s shoulder pads with his helmet set slightly to one side. On the whistle, the defensive player must fight across the face of the offensive lineman. This drill can be made more difficult for experienced players by adding a ball carrier who must be tackled if the defensive lineman can regain leverage and escape the blocker.

Two techniques can defeat the dreaded double-team block. The object of a double-team drill is to learn how to split the block, or, at worst, avoid being driven back into the linebackers. Two offensive linemen try to block a single defender by stepping together and creating a solid wall.

The first option is to split the double team. The defender needs to be quick, turning his shoulders perpendicular to the line of scrimmage, driving a leg between the two players and placing his foot on the turf behind the heels of the offensive linemen—all while staying as low as possible so he can squeeze between the hips of his two opponents.

If a defender recognizes a double-team too late, or is unable to split it, the second option is to take both linemen to the ground, creating a pile that plugs the gap in the line and eliminates two blockers. The defensive lineman must attempt to drive his knee into the ground directly beneath the blocking linemen while holding on to both players. If successful, the defender will end up lying on his side with one lineman in front of him and the other on top.

Everyone on the D-line wants to get sacks. Linebackers or defensive backs will almost always lead the team in tackles, but linemen can achieve the top spot in this coveted statistical category. The One-on-One Pass Rush drill is a great way to practice techniques at full speed against live opponents.

Five defensive linemen line up across from five offensive linemen, preferably in the positions they normally play. Standing behind his unit, the offensive line coach selects a specific defender to rush, while the defensive line coach stands behind his unit and indicates the snap count. On the snap, all five defenders take two steps at full speed, as if they are rushing, but only the selected player continues rushing. He must find a way to reach the quarterback in less than four seconds using any technique he chooses. After four seconds the whistle blows, indicating a thrown pass, and the defensive lineman must halt his rush and sprint back down the field as if pursuing the ball.

In game situations, nothing happens exactly as it is practiced. The closest you can get to game action on the practice field is the Block Recognition drill. Three offensive linemen face off against a single defender who must recognize and react to the different blocks they attempt to use against him—pass blocks, double-team blocks, down blocks, zone blocks, and trap blocks, among others. In this defensive lineman drill, players use the skills they’ve learned from the other drills to defeat the blocks. Some coaches require players to shout out the style of block they are facing. Others prefer their players to focus on beating the offense.