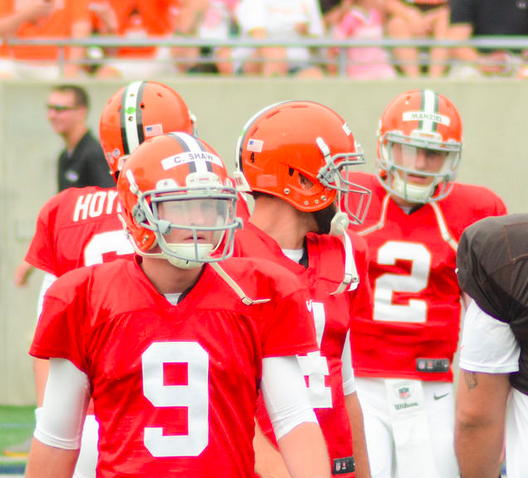 There may be no more important position on the football field than the quarterback. Though the following set of drills and programs are not terribly extensive or long individually, when coupled together they can vastly improve a quarterbacks technique–especially in the drop back, set-up, and delivery of the ball.

The purpose of this drill is to warm up the arm and, at the same time, teach concentration on target and ball release. Pair off about ten yards apart directly in line with each another, kneeling on both knees. Receiver will hold both hands up, giving the QB a target to throw to. Dont throw hard and concentrate on target.

Put your knee on the throwing side down. Place the ball on the ground, grip it with just the throwing hand, lift it up with one hand, cock it high with two hands, and throw it to partner. Exaggerate your follow through as if to pick up grass. Use the arm only and lead with elbow. Helps to develop stronger arc and wrist snap. Switch the down knee for variation.

Purpose is to warm up the arm, and at the same time teach concentration on target and passing technique. Pair off about 12 yards apart directly in line with each other. Increase the distance as you warm up. Don’t exceed 20 yards and do not take a step with your foot. This helps to develop a stronger arm.

A basic warm- up to teach how to throw off the wrong foot by simulating the motion of throwing off the wrong foot while scrambling or sprinting out. If youre a right-hander start with your right foot forward in heel to toe relationship. Point the toe in the direction of the throw. To throw with the body you must rotate hips. If thrown with correct motion, you will be forced forward on the ball of your right foot and your weight will follow through.

Same as above except step with the correct foot. Right hander steps with left foot. Point the toe in the direction of the throw. When throwing at release of ball, turn hand to outside and palm down. This motion assures tip of ball will be up for a soft pass. Over-emphasize the follow through until it becomes an automatic part of throwing motion.

Run in a circle playing catch and reverse the action. Release the ball quickly. Square the shoulders and hips to target. As a variation, one man can stand still and the others run around him. Change direction and switch positions.

Run the length of the field and back playing catch. Keep 10 yards apart. Release the ball quickly. Square the shoulders and hips to the target. Work to increase speed.

Sprint right and left. Throw to other QB or target. Release the ball quickly. Square the shoulders and hips to target. Practice throwback pass also. Get a depth of 6-7 yards.

Concentrate on speed on getting back. Get depth, step up and throw to a target. Start at 20 yards and work to 40 with lowest possible trajectory. Throw hard and soft. Use centers if possible. May time drops.