To improve their foul shooting your players need to work on four groups of skills, not necessarily in this order . 1. Foul Shot Technique 2. Foul Shot Practice 3. General Shot Technique 4. General Shot Practice Foul Shot Technique A player on the foul line needs a sensible routine to follow for two reasons. One, this routine focuses the player on the shot rather than the score or the crowd noise. Two, a tired player may relax and skip essential mechanical movements that are critical to good shooting. Here is a four-step routine. Step 1 involves shaking or loosening the wrists. Players should wave the 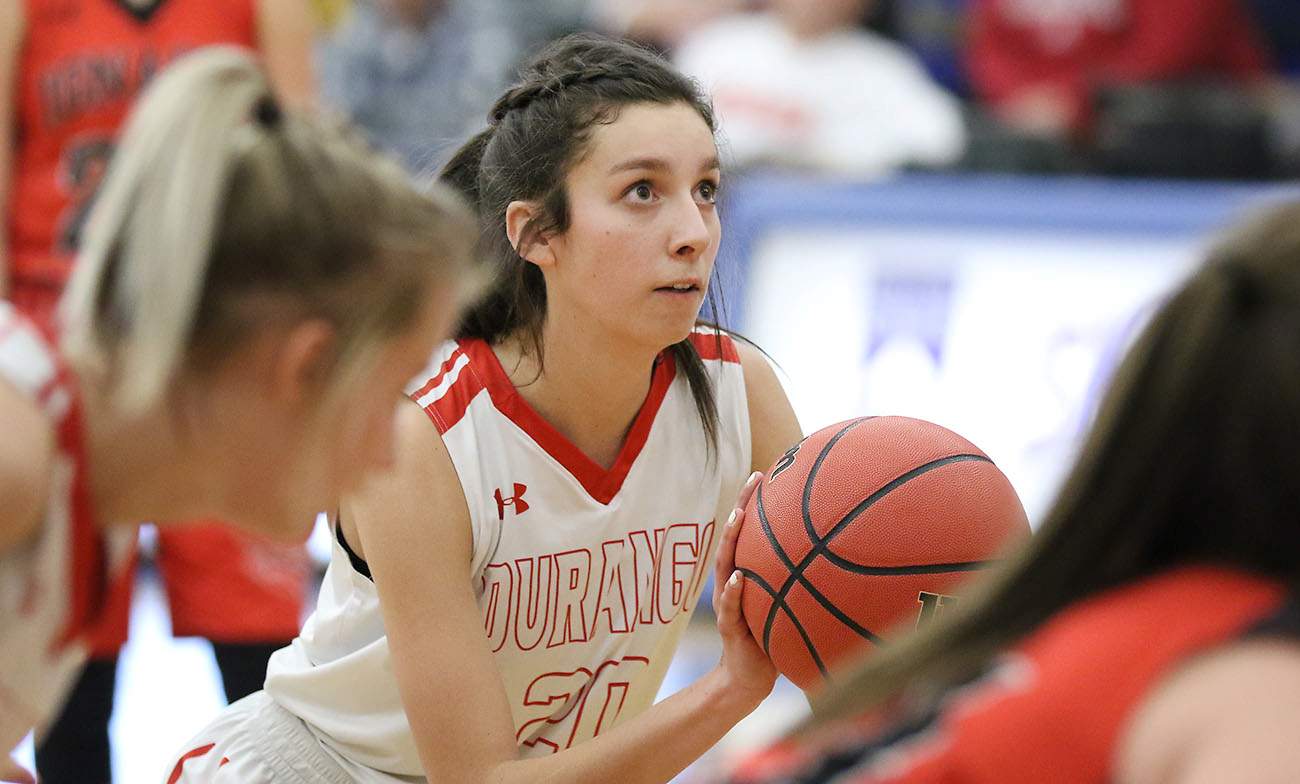 To improve their foul shooting your players need to work on four groups of skills, not necessarily in this order .

Foul Shot Technique
A player on the foul line needs a sensible routine to follow for two reasons. One, this routine focuses the player on the shot rather than the score or the crowd noise. Two, a tired player may relax and skip essential mechanical movements that are critical to good shooting. Here is a four-step routine.

Step 1 involves shaking or loosening the wrists. Players should wave the hands back and forth several times like a wet noodle. This only takes a few seconds.

Step 2 involves getting fingertips on the ball. Dribbling or bouncing the ball several times satisfies this second requirement.

Step 4 is to take several deep breaths then stop. Players should not breath when they take the shot. A few breaths before the shot can help relax a tense player.

Easy to remember cues for these four steps are: wrists, touch, knees, breathe. Needless to say, players must use these cues in practice.

Another problem players demonstrate on the foul line, especially in game-deciding situations, is inappropriate shot speed. Players need to shoot at their normal speed, not slow down the shooting motion for extra care. I’ve seen many teams at both the high school, college, and pro level lose games because the coach told the players to slow down, to be extra careful. What you need to say is, prepare for the shot carefully, but shoot at your normal speed.

Foul Shot Practice
In a game, a player usually shoots two shots at a time under pressure after sprinting up and down the court. Sensible practice involves shooting under the same conditions. Instruct your players to shoot two shots and then sprint down the court several times while dribbling the ball. Repeat this shooting and sprinting as many times as needed to duplicate game conditions.

Do this drill at the end of practice when players are most tired. Make sure they follow the four technique cues ­ wrists, touch, knees, breathe.

General Shooting Technique
aFoul shooting practice will not help a player with poor shooting technique. Practicing with improper technique results in bad habits that will be hard to change. But we can change them with work on shooting technique, which includes touch, wrist movement, and body alignment.

Touch deals with how a player handles the ball. Players use their fingertips exclusively to handle the ball. See Diagram 1.Palms and fingers should never touch the ball. Players can practice like Pete Marovitch did by holding the ball properly for multiple periods of time, each up to five minutes. The story goes that Pistol Pete slept with the ball. Your players can develop even better touch if they hold the ball with the finger ends. See Diagram 2. When players shoot, the ball goes off the ends, not the tips, of the fingers. Holding the ball in an exaggerated claw-like position will reap incredible rewards for players with “bad hands.” Soon they will have good hands that will enable them not only to shoot better, but also to pass, dribble, and catch better.

aThe second and most important shooting technique involves wrist movement. A player flicks the wrist to shoot the ball. The wrist needs to be bent back 90° to flick properly. Bending the wrist back 85° completely throws off the shot. To get the wrist back as far as possible players should work on flicking the wrist backward. See Diagrams 3 and 4. Players flick their hands backward as far as possible and let them come forward by themselves. Players need to practice this technique for several minutes 10 or 20 times a day until their wrists loosen up. Shaq’s shooting problems stem mainly from stiff wrists. Wrist work would help cure most of their shooting problems.

aA third important technique involves body alignment and squaring up. Shoulders need to face the direction of the shot. Instruct players first to put their arms straight up overhead; then bend the wrist back and keep finger ends on the ball; finally bring the shooting arm elbow towards the nose or center of the body but not closer to the body. See Diagram 5. If the arm is further out, players look like they are shot-putting the ball. Then players flick the ball 1-2 feet upwards using the wrists only. Players catch the ball on the fingertips, align the arm, wrist back, and flick again. Do this 20-30 times in a row as much as 5 times a day. Cues to use with this drill are: overhead, wrist and hand, elbow, and flick.

aThis drill is easier said than done. Players will encounter a big problem attempting to move the elbow in ward ­ their wrists, and sometimes their shoulders, will turn inward as well. Most players will need extra work twisting the wrist to the shooting direction. Players with poor technique will have difficulty executing these motions, and you will need to work one-on-one with them.

Every coach needs to teach three levels of shooting practice. One, the technique level, involves shooting mechanics. Attention is to the details of movement. This is the most important and difficult part of shooting because each player needs to be closely watched. Several technique level drills are described above. The second level, the practice level, involves more regular shooting from short distances. Players apply technique to short shots and then gradually move back. The third level is game level shooting. Close defensive pressure needs to be applied or players need to be running full speed, full court. The two-shot and sprint foul shooting drill is a game level drill.

Three shooting drills that involve level one and two practice are as follows:

The first shooting drill will blow away even most experienced players. Good shooters may be able to perform satisfactorily. Lesser shooters will have trouble. Start by situating the player directly under the basket facing the backboard. The player’s nose should be under the front rim. A player must extend the arms completely and flick the ball, like in the flick up drill, using the wrists and legs as well. Players want to move back an inch or a foot, but don’t let them.

Show players, if necessary, how to square up to the direction of the shot for the second drill, the one-foot shot. Demonstrate correct and incorrect squaring up and also show squaring up to the backboard. In this second drill, a player shoots one-foot shots off the backboard from the left, right, and center. The center position is most important for correct technique, so don’t let players shoot swishes. This drill enables a player to practice correct technique and develop good habits. If you see problems, do not allow bad technique to go any further. Stop the player. Do not correct him. I will say that again-DO NOT CORRECT TECHNIQUE. If you give shot instructions, a player will shoot the ball with a little voice, yours, in his head. You want a player to shoot without voices. Correct improper technique with the technique drills only. Send players back to them.

A third drill is the near to far drill. This develops shooting range. Start one-foot from the basket, in the center position first, and instruct players to move back one step each time they make two in a row. When one shot is missed the player must take a step closer to the basket.

Summing Up
Improving a player’s foul shooting is not an easy endeavor. Attempting to simplify the task by skipping all the learning steps and just practicing 20 or 100 in a row does not work. Using systematic methods that improve shooting technique will give you success with every single player.