Full court press defenses try to get turnovers and easy baskets by pressuring, trapping, and harassing the offense. There are several principles and some strategies in beating this pressure. Stay calm. The press tries to upset you, and make you commit turnovers. Try to be calm and confident that you can beat this. If you make a mistake, you must immediately forget it and stay calm. Otherwise, they may get three more steals from you, like a snowball effect. Do not dwell on what's already happened always think "next play", what is going to happen next. The coach must 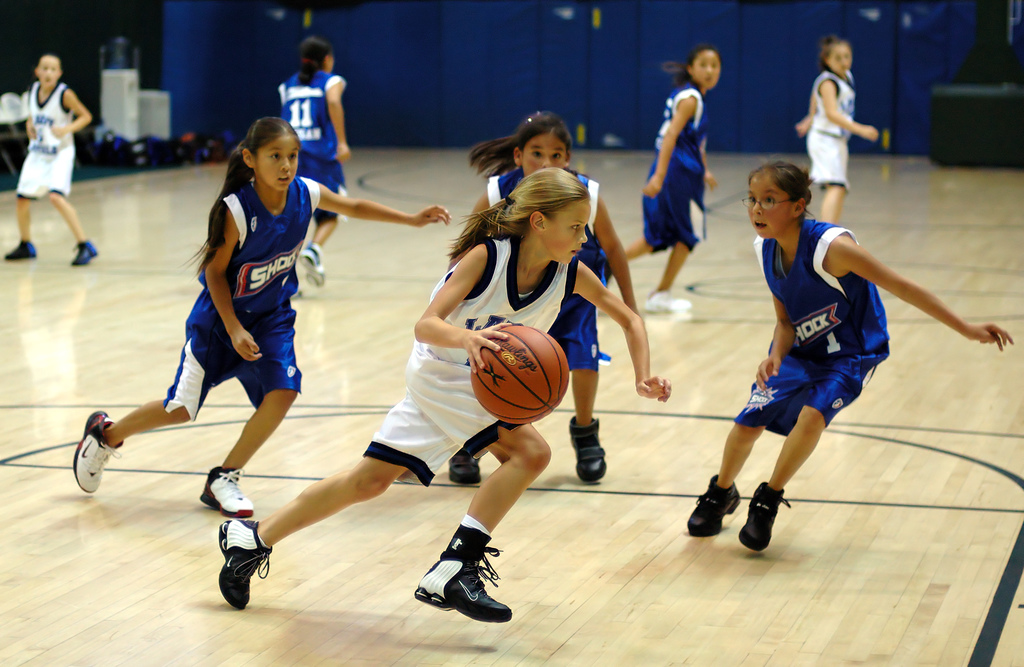 Full court press defenses try to get turnovers and easy baskets by pressuring, trapping, and harassing the offense. There are several principles and some strategies in beating this pressure.

Stay calm. The press tries to upset you, and make you commit turnovers. Try to be calm and confident that you can beat this. If you make a mistake, you must immediately forget it and stay calm. Otherwise, they may get three more steals from you, like a snowball effect.

Do not dwell on what’s already happened always think “next play”, what is going to happen next. The coach must stay calm too. An upset, angry coach is not what the already rattled players need. In a time-out, the coach must be calm, reassure, re-focus his players, and settle his players down.

Think “attack!”. A full court press is always a gamble for the defense. If you think positive, and attack the pressure, you can get an easy lay-up and score. So when you see a press coming at you, ATTACK! Think of it as something to beat, to get an easy score… make ’em pay!

We like to attack the press with quick passing as this can get you a 2-on-1 situation and a lay-up. Sometimes you have to beat the press with the dribble, but then you are less likely to get the lay-up. So think pass first.
Three “looks”.
When receiving the inbounds pass, catch it and get into triple-threat position facing the defense and look up the floor before immediately starting your dribble.

1. Look up. See the floor. Look up the court. Don’t look down at the ball.

3. Look before you dribble. Don’t dribble unless you have to. You beat the press by quick, sharp passing usually not dribbling.

Getting the ball in-bounds. Get the ball in quickly, before the defense can set up. Make sure you make a good in-bounds pass. Do not take the ball out from directly under your basket, or your passing lane may be restricted by the backboard. If the other team has just scored, you may “run the baseline”.

You cannot run the baseline if the ball went out of bounds and the official is handing it to you. You must stay where the ref gives it to you. If the ref doesn’t handle it (like after a score), you can use the whole baseline. You can run the baseline after a time-out, if the time-out was called immediately after the opponent scored.

Avoid “trap areas”… the corners. Don’t dribble into one of the trap areas (see below)… back away but keep your dribble alive, or pass off.

If you find yourself in a trap.. (1) do not turn your back to the defenders as this allows them to close the gap on you and you cannot see your teammates to pass the ball. Instead, face the defenders, and keep the ball low and moving and keep your body moving using your pivot foot; (2) Stay low and do not stand upright with the ball over your head, as this also allows the defenders to immediately close in on you.

If you have your dribble, you can (1) attack the outside leg of one of the defenders and dribble by, or (2) split the double-team by making an aggressive “step-thru” with one leg between the defenders, with head and shoulders bent over forward, cradling and protecting the ball like a football halfback going through the line, and then push the ball out in front of you starting your dribble. See Escaping a Trap.

Pass quickly up the court
Quick, accurate passing. You must look and find the open man immediately, and make a quick, accurate pass. Avoid soft, lob passes. Passing up the floor, and cutting, are the secrets to beating the press. Look up the floor and anticipate where you will pass the ball, even before you get it. Don’t be hesitant to make the long pass up the court. Oftentimes a good point guard can attack the press with the dribble and, before the double-team arrives, make a long pass up the court to an open receiver for a lay-up.

Receivers meet the pass… go to the ball, get open. But keep your spacing. Look for the open spots in the defense. Get open so your teammate can pass to you. Before you even get the ball, look to see where other open teammates are, so you will know where to pass to immediately. When you receive the ball, don’t have your back turned. Immediately pivot and face down-court, so you can find an open teammate.

Have a standard “press break” offense that works for you, so you can immediately recognize the press and yell “press break” to your team. Here are several press breakers to choose from:

Avoid the “trapping zones” seen in this diagram.
Avoid the corners (yellow).
If you get trapped in the blue zones, you risk the 10 second call.
The red zones are just like getting caught in the yellow corners… you are trapped by the sideline and the center line.

Trapping zones, avoid getting caught in these areas
Another way to beat the press is to use the “secondary” fast break (see “Secondary Break”). Get the ball in quickly before the press is set defensively, then a good long pass up the sideline and you’ve got a lay-up.