Soccer – Other | The epidemic that’s ruining youth sports!!!! MUST READ!!!!

During a soccer game early last year, Tiffany Lin began experiencing a sharp pain in her right knee. Girls soccer team booted from tourney because player 'looks like a boy' High-school baseball coach fired because of ‘crybaby parents' Youth football coach brutally murdered in front of his team Scared parents are killing youth football in NYC Then a freshman at Manhattan’s Beacon School, Lin tried to play through the pain but sought out a doctor when it wouldn’t subside. The diagnosis? She had Osgood-Schlatter disease, which is the inflammation of the area just below the knee. 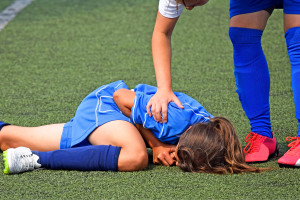 Youth football coach brutally murdered in front of his team

Then a freshman at Manhattan’s Beacon School, Lin tried to play through the pain but sought out a doctor when it wouldn’t subside.
The diagnosis? She had Osgood-Schlatter disease, which is the inflammation of the area just below the knee. It mostly occurs during growth spurts and is exacerbated by continuous pounding of the knees that happens during sports such as soccer and running.
It wasn’t difficult to figure out the culprit. Lin, a fullback, played on three soccer teams: her varsity high-school squad, club ball in lower Manhattan and a recreation team. At times, she was playing the sport seven days a week.
“My doctor said it wouldn’t have happened if I wasn’t overusing my body so much,” says the 16-year-old, who was sidelined for a few weeks. “I’m getting better. I’m learning how to ice, stretch and rest.”
But for every teen athlete who takes a break, there are hundreds who don’t heed doctors’ warnings and continue to overburden their growing bodies. Eventually, many will contribute to the epidemic of overuse injuries — which are on the rise according to several studies and orthopedic doctors — now sullying youth sports.
“I’m seeing these overuse injuries in younger and younger people,” says Michael A. Kelly, MD, chairman of the Department of Orthopaedic Surgery at the Hackensack University Medical Center.
‘I’m seeing these overuse injuries in younger and younger people.’
A 2015 survey in the American Journal of Sports Medicine found that 60 percent of all Tommy John surgeries in the US are for patients ages 15 to 19 — startling considering that professional baseball player Tommy John himself was 31 when the surgical-graft procedure was invented to repair his damaged elbow ligament in 1974. In 2010, AOSSM launched the STOP (Sports Trauma and Overuse Prevention) Sports Injuries campaign to combat the worrisome trend.
The injuries are a byproduct of many factors, including hypercompetitive athletes, a growing number of travel teams and tournaments, and overzealous parents pushing their children too much because they believe they have the next LeBron James on their hands.
“There is a huge amount of delusion I think,” says Dr. Kelly of the latter.
But the largest cause is young athletes specializing in one sport at an earlier age. Instead of playing lacrosse, basketball and football, they are opting to stick with just one, and it’s taking a toll on their bodies.
“I‘ve certainly seen patients with overuse injuries at 13, 14, 15 who are playing year-round ball,” says Brett G. Toresdahl, MD, a primary care sports medicine physician at Manhattan’s Hospital for Special Surgery who treated Lin.
“It’s young people with injuries that weren’t common when there was a diversity of sports — three different sports and three different seasons. The variety of the stress on their body wasn’t causing it to break down to the degree we are seeing now.”
Modal Trigger

Matt Blaney is heading back to the pitcher’s mound (above); when his father Tom posted a picture of Matt’s post-surgery wound (below) on social media, it went viral.
Courtesy of Tom Blaney
Modal Trigger

Courtesy of Tom Blaney
In fact, a few parents tell The Post that some teams even asked them to sign contracts promising their children will not play any other sport. As they focus on one discipline, kids supplement their team activities with private lessons from trainers.
“There’s all of this training and private lessons,” Tom Blaney of Tinley Park, Ill., tells The Post. “There’s the belief that you are never going to make the high-school or travel team unless you do the private stuff.”
The perils of overuse hit home for Blaney, who became a sports-dad celebrity of sorts when his son Matt, a high-school pitcher, had Tommy John surgery last May at the age of 17. After the cast was removed, the elder Blaney snapped a picture of the nasty wound to post on Facebook.
When he uploaded the gruesome snap, he punctuated it with a poignant message:
“So you think throwing 120 pitches in a game as a 12 year old is ok? Of course it doesn’t hurt the kid that day. But it might when he’s 17,” he wrote. “After I stopped being Matt’s coach at age 14, I allowed coaches to over use him. I take the blame. I knew his pitch counts like my own SSN. And because I didn’t want to embarrass him or have his coaches think I’m a crazy dad, I let him throw until the coach decided to pull him.”
The post hit a nerve, instantly going viral, with thousands of parents and coaches writing to both the younger and elder Blaney.
Matt, however, faults his own competitive streak.
“I think it was important that my dad put it out there,” says Matt, now 18, who has since recovered and will be pitching for the University of Texas at Dallas next year. “It was me asking to pitch more after I should have hit my limit. It was coaches giving in to what I was asking for. It’s hard to tell a gamer, ‘No, you can’t go do that.’”
This past December, Illinois instituted a pitch-count limit of 105 for high-school baseball games. (New York’s limit is 105 and New Jersey’s is 110; Connecticut doesn’t have a limit.)
But surgery doesn’t guarantee that athletes will remain in the clear. Dr. Kelly is seeing more return trips to the operating room, especially with anterior cruciate ligament (ACL) repairs.
‘The purpose of youth sports is to keep kids healthy, out of trouble and foster a lifelong love of exercise and sports. But there’s no longer any tapering in youth sports.’
“I believe we’re seeing re-injuries to be more common in the last 10 years. And these are injuries that are not reversible,” says Kelly. “By the time these kids get into the next generation, we’re going to be seeing [joint] replacements at a younger and younger age.”
Lin’s parents are resting their daughter this summer and she is enrolling in New Jersey’s Lawrenceville School as a junior in the fall, where students are required to play multiple sports.
“They hope that I have more variety instead of just focusing on soccer,” she says.
Toresdahl says we’ve lost sight of the original reason we put our kids on the field.
“The purpose of youth sports is to keep kids healthy, out of trouble and foster a lifelong love of exercise and sports. But there’s no longer any tapering in youth sports,” he says.
Tom Blaney echoes those sentiments.
“Some parents are choosing to lose focus and not remember that the best part about sports is watching them hit the ball off the tee when they are 8 and a home run at 18,” he says, adding, “Enjoy it as much as you can because only one in a million go pro.”