Snowboarding can be a frustrating game at times; there’s nothing worst than feeling like you’ve hit a ‘glass ceiling’ that you can’t progress beyond. Part of what drives us to snowboard is the feeling of elation we get when we improve or land a new trick. If you feel like your snowboarding technique has recently plateau’d, don’t despair because our Community Manager and Course Leader, Tom Ewbank, is here to draw upon all of his teaching and coaching experience to give you ten tips that will help dramatically improve your riding. 1) Buy the correct gear 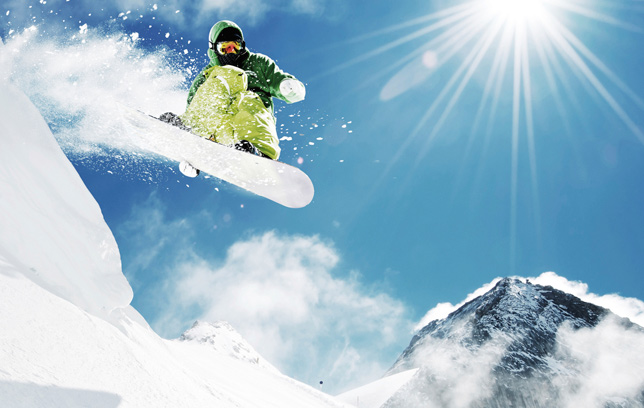 Snowboarding can be a frustrating game at times; there’s nothing worst than feeling like you’ve hit a ‘glass ceiling’ that you can’t progress beyond. Part of what drives us to snowboard is the feeling of elation we get when we improve or land a new trick. If you feel like your snowboarding technique has recently plateau’d, don’t despair because our Community Manager and Course Leader, Tom Ewbank, is here to draw upon all of his teaching and coaching experience to give you ten tips that will help dramatically improve your riding.

1) Buy the correct gear for your snowboarding technique

With so many boards, boots, bindings and items of apparel available it’s very easy to buy a setup that will not suit your ability, strength or riding style. When buying equipment always do as much research as you can before parting with your hard-earned cash.

When contemplating what board, boots or bindings to buy next season think carefully about which areas of your riding you would like to improve. For instance: if you don’t feel that you are stable when riding quickly, or when hitting bigger jumps, you could consider purchasing a stiffer board or a longer and wider board. The reverse is true; if you have a solid all-mountain snowboard but you would like to improve your jibbing and park riding then look at a softer more park-focused board, etc etc. It takes snowboarders years to work out what kind of snowboard setup works best for their snowboarding technique, so don’t be afraid to chop and change. Change is good!

There’s a reason why so many professional athletes spend hours each day at the gym… Because it makes a substantial difference to their performance. If you aren’t fortunate enough to ride almost every day in the winter then you will need to stay snowboard-fit another way. Exercising and training will also help to prevent muscle and ligament injuries.

– Keeping your strength to weight ratio high (increasing strength but not bulking up).

There are a number of ways in which you can improve your fitness in all of the aforementioned areas; you only have to look at snowboard-specific exercise programmes on the Internet. The following video is a good example:

3) Learn everything regular and switch

Too many riders rely on riding in just one direction. Learning switch riding will not only improve your trick repertoire and your overall riding ability but it will help you to understand your own riding better, and improve your regular riding beyond recognition.

Switch riding often feels unnatural and difficult so learning a trick, a turn or a movement while riding switch often takes a lot more thought and analysis. In short, you have to really think about what you’re doing! When attempting to learn switch riding think about the movements your limbs and feet are making, where you are looking, your body positioning on the board, and the line you are taking down the slope.

Start by working on the tricks and turns that you can already do, once these are at the same standard as your regular riding you should try to learn both regular and switch each time you learn something new. Riding powder in a switch stance is the ultimate test!

4) Watch snowboard videos to improve your own snowboard techique

If you want to learn a trick or an advanced riding technique there is no better way than watching how the professionals do it. Today it’s incredibly easy to watch snowboard edits on the Internet any time of the day. Transworld, Yo Beat, Method Mag, Whitelines, Snowboarder Mag, Onboard and countless other online publications all post new video edits every single day of the year.

Growing up there were a number of pro snowboarders that I admired (worshipped) and I’d like to think that the way I snowboard today was heavily influenced by their riding in those videos. It’s no coincidence that once Torstein Horgmo had landed the first triple cork it only took a matter of weeks before a handful of riders could lay claim to stomping a triple. After all, watching a video of a rider do a trick can help us to visualise the trick and understand the necessary movements and set-up involved.

For many people that have been snowboarding for a little while and have never seen themselves ride it often comes as a bit of a shock. As a coach that often used video feedback and analysis I can vividly remember the disappointment and complete confusion in the faces of my students when they realised they didn’t ride like they thought or hoped. Nevertheless, in snowboarding ignorance definitely isn’t bliss and understanding how you ride by watching your own riding is priceless for your progression.

Shaun White, Bud Keene, Burton Snowboards, video feedback, coaching
Shaun White getting some video feedback from coach Bud Keene
So here’s a tip. When you next go riding with your friends ensure that you take along a video camera or GoPro. As well as filming your friends make sure that they spend time filming you. When you get home have a look at the video footage of yourself and compare your riding to that of your favourite snowboarder. Also, if you have a tripod and a video camera, there is no harm in filming yourself……don’t worry you’re not being vain. Make sure you move the camera around so that you are able to film the approach, take-off, trick, and landing. This will allow you to analyse every part of the trick and visualise the trick more easily. I find that watching the footage after every attempt really helps and leads to me nailing the trick far quicker then if I view the footage at the end of the day.

6) Push yourself, but only when you’re feeling ‘it’

As a snowboarder it is important that you regularly step outside of your comfort zone, otherwise, you’re unlikely to progress. I’m not saying that you should endanger your life by doing something that is beyond your skillset. As long as you follow a steady learning progression and you build-up to tricks and riding different, more challenging, terrain then you should stay safe. An important part of snowboarding is feeling that adrenaline coursing through your veins……..rest assured even the pros get nervous before hitting a new jump or trying a new trick.

Nevertheless, it’s important to recognise when it is safe to push yourself. The best way to ensure your progression is injury free is to do the following:

– Check that the weather and snow conditions are good, black ice and poor visibility are conditions to avoid.

– Never push yourself if you are tired or unwell.

– When riding new terrain ensure that you are riding with somebody who knows the terrain and that you are properly equipped.

– When riding jumps or rails always inspect them first.

– Watch other people riding the features and look at the speed and line which they take.

– Check the speed without hitting the feature.

– Always straight air a jump or 5050 a rail as your first trick.

– Begin a ‘progressive’ routine before you try your new trick. I like to land 3 of my favourite tricks (fs, bs & switch), then two of the closest tricks to the one I’m trying (for instance if I was trying a bs 7 I would land a bs 5 and a cab 5 before trying it).

If I feel comfortable with all of the aforementioned points then I will try the new trick.

7) Get on a trampoline

It’s a proven fact that gymnasts often make for very good snowboarders; in the UK you only have to look at the success of Billy Morgan and Jenny Jones to see the benefits that a youth spent in the gymnasium can bring to a snowboard career.

Trampolining will not only increase your physical strength (especially your core strength) but it will also improve your spatial awareness, muscle memory for certain tricks, it will help you visualise certain tricks, and will help you to coordinate your upper body rotation with the timing of your pop.

Although buying your own trampoline if you don’t have the space or the funds there will be plenty of clubs in your local area.

Visualising new tricks and other movements is one of the most important skills a rider can possess and is often the difference between a good snowboarder and a fantastic snowboarder. We all know at least one person who has an uncanny ability to land new tricks on a skateboard, BMX or snowboard, first try. Visualisation of the trick is normally the key to their success.

visualisation, snowboard, fs boardslide, snowboarder
Before and after…….visualising tricks is a real help
Much like a golfer takes a practice swing or studies the undulation of a green before putting, a snowboarder will close their eyes and go through the necessary movements in their head. This may mean mimicking the movements, especially of the upper body, while standing at the drop-in. Give it a go…..it could be the break-through your riding needs.

When snowboarding there are a number of movements that you should be making.

Longitudinal (fore and aft) – movement along the board.

Lateral – movement across the board

Torsional – the movement of your feet independently in a pedaling motion.

Rotational – movement of the knees, hips, and upper body in a rotational movement.

Up and down – the bending/extension of your knees and flexing of your ankles.

We use these movements all of the time when snowboarding but we’re not necessarily aware of when and how we use them. Have a play around with these various movements while riding, especially when entering and exiting turns, and try to over-emphasise these movements so that you can clearly feel what effect the movement has on the performance of the board. By understanding this you can consciously add these movements to your riding, which will undoubtedly improve your riding a lot.

As good as you are, nobody is too good for a lesson……at the end of the day even Shaun White has coaching! Whether you go for a short hour-long private lesson with an instructor, a week-long freestyle camp, or a 10-week instructor course…..you’ll genuinely be surprised at how much of a difference an instructor or coach can make to your riding.

Mint Snowboard School, Morzine, Peak Leaders, gap year, improve snowboarding
There’s no shame in having a lesson…..these guys ride every day of their lives & know what they’re talking about.
Have fun!

Most importantly: “have fun” and remember why you snowboard. We all know how frustrating it can be when you can’t seem to progress beyond your current riding level, but I guarantee you that every day you go snowboarding you will have learned something new and you’ll be a better and more experienced snowboarder for it.