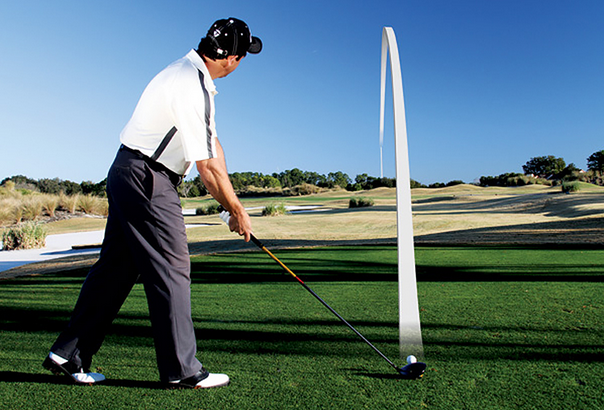 One of the most common mistakes amateurs make is improper alignment. Some think they should align their feet at the target, others try to get their shoulders parallel to it. Hey, some golfers try to align everything at the target! They’re all wrong.

The correct way to align your shots is to always begin by first assessing your target from behind the ball. This will give you a perspective of the entire hole and help you aim right where you want the ball to go. Secondly, before you make your actual stance, set the clubface behind the golf ball and align it directly at the target. Do this before, not after, you get into your stance. PGA Tour players have a knack for aligning the clubhead in this fashion. Pay attention to how they do it the next time you tune in.

8 Tricks To Become A Better Player

Most amateurs choose what club to use based on length. On shorter holes, they use shorter clubs. Longer holes, longer clubs; and so on. But better players know there’s more to selecting the right club than that. It also includes things like natural shot tendencies, wind, hazards and whether or not hidden dangers lurk in prime landing areas. But most of all, a better player looks at what type of approach shot is to follow. The hole may be only 365 yards long, but with a good drive, that leaves a touchy 70- to 80-yard approach. Who wants that? The right play would be to avoid awkward distances and hit a 3-wood, leaving a full wedge approach.

Instinctively, you might assume that the stance changes, depending on the club. Not true! When it comes to full shots (not pitches, chips or putts), maintaining a consistent stance is critical to becoming a better ballstriker.

That’s not to say there are minor adjustments in spine angle, ball position and stance width, but generally, how you stand over an iron should not be far off from how you situate yourself with a driver. Notice the similarities in the photos above? This is what you want.

Better players always, and I mean always, have a fundamentally solid grip. To start, grip the club with your gloved hand and emphasize the handle’s placement in the fingers between the first knuckle and the palm. Then, apply the ungloved hand so it wraps comfortably around the handle. From there, the thumb and index fingers of both hands form two Vs, both of which should be pointed somewhere around the right side of your chest or right shoulder. Follow this advice and you’ll have a solid grip.

TRICK 5: Play With The Wind, Not Against It

Many amateurs fret about playing in the wind, but better players know how to use wind to their advantage. For instance, better players know that no matter what type of shot you’d normally play, whether it’s a draw, fade or whatever, how the wind blows changes everything. You have to make adjustments to make the wind work for you, instead of trying to hit a shot to fight against it. I’ve seen that happen time and time again with amateurs.

Put it this way, no matter how big a fade or draw you’re capable of hitting, it’s likely the wind will always win. So what do you do? Play with it! In the photo above, I’ve got a stiff wind blowing from right to left. Instead of battling it, I’ve opted to hit a drawing tee shot with hopes that the wind works alongside me to move the ball from right to left. Also, since I’m playing with the wind and not against it, it’s likely my draw will be more pronounced, so I need to make sure I aim farther right to allow for it. And by the way, if, by chance, my natural ballflight was a fade, instead of hitting a draw, I’d play for a straight shot and aim a little less right of the target. Either way, I’m letting the wind move the ball back into the fairway.

Still not convinced? Well, had I played a fade, I’d have run a greater risk of pulling the tee shot with the ball not fading enough or at all. And with that right-to-left wind, things would only get worse. I’d be hitting my second shot from the bear grass! If the wind were blowing the other way, a better player knows to never fight a slice wind. The play is to aim left and let the ball drift to the right back into the fairway.

Lastly, when playing in the wind, no matter which way it’s blowing, don’t think you need to swing any harder than normal. Just accept the fact that wind is blowing, and although it may be in an undesirable direction, the key is to avoid going to war with it. This will foul up your rhythm and tempo, not to mention your scorecard.

Have you ever heard the saying, It’s always better to miss it on the pro side of the hole? How about, Never up, never in? In case you haven’t heard these sayings, what they mean is quite simple. Better players know that, no matter how well you judge the speed and break of a putt, if you consistently miss on the low side of the hole, you’re never giving yourself a real chance. (The low side, by the way, refers to the side of the hole that’s actually lower than the hole.) Since golf balls don’t roll upwards naturally, unless you hit the putt from below the hole up the hill, the ball has no chance to go in.

On the other hand, if you tend to miss more often on the upper side (the pro side) of the hole, once in a while, the ball may actually find the hole. The key is speed. Having the right speed, even if you aim a little high and for a little too much break, the ball actually may slow down more and start to break into the hole even though you were a little off with your aim. Better players understand this (whether they’re aware of it or not) and generally miss to the higher side of the hole rather than the lower side. They also cite speed as more important than direction, for this very reason.

That said, next time you practice, find a breaking putt to the right, and then one that breaks to the left. Practice on both holes until your misses start trending toward the pro side of the hole. Of course, the goal is to make more than you miss, but with the right kind of misses, you may find yourself making a few more putts, as well!

Another one of the higher-handicapper’s biggest fears on the golf course is the sand shot. Better players know that with the right fundamentals, hitting good bunker shots isn’t as hard as it looks. There are a few fundamentals you ought to follow to get the job done, such as hitting down and behind the ball and letting the sand lift the ball. But here, I want to focus on one thing, and that happens to be the finish. So many of my students seem to believe that it’s necessary to dig the wedge into the sand as you would an ax into a piece of firewood, all in order to excavate the ball. They make a steep backswing and THUD! The wedge stays stuck in the sand in most cases, and so does the golf ball.

I think chipping is too often overlooked. Hey, maybe it’s not the most glamourous shot to hit, but that doesn’t make it any less important. A great chip can help you make or break par faster than any putt.

To become a better chipper, concentrate on stacking your impact position. This means that, at the moment of truth, the left arm, the shaft and your weight should all be stacked over your left leg. This helps you better control the shot and ensure you hit it crisp and solid. If you aren’t stacked, your chipping will be inconsistent, and it’ll be hard to judge distances and how much the ball will fly and roll. But if you stack it, all you need to do is judge how far you want the ball to go and lengthen or shorten your backswing so it fits the shot.

This tip, like the others in this story, are quick and simple ways to turn your game around and become a better player. Practice them and you’ll see the better you get, the simpler your swing and swing thoughts should become. And remember, have fun out there!