Weekends sometimes pass in a blur for mother of three and interior designer Michelle Holtzman of Skokie. Her 11-year-old son, Andrew, plays hockey for the Skokie Flyers, a competitive team that travels throughout the Chicago area for regular-season games and as far away as Boston and Toronto for tournaments. Her daughter, Sophia, 10, is on three soccer teams and plays up to four games on Saturdays and Sundays. "Sometimes I do wish we had more free time," Holtzman says. "During the sports season, it's school, homework, an early dinner and off to practice, which is driving one kid to one 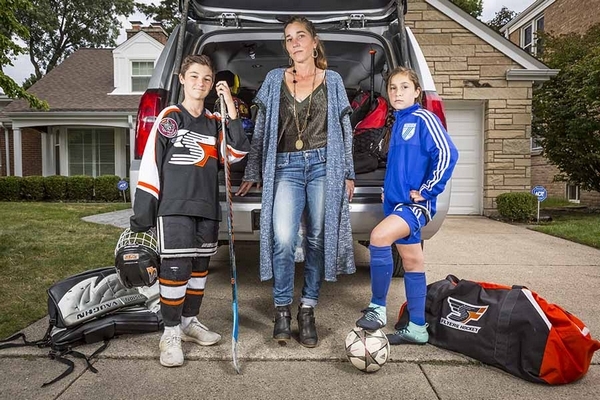 Weekends sometimes pass in a blur for mother of three and interior designer Michelle Holtzman of Skokie. Her 11-year-old son, Andrew, plays hockey for the Skokie Flyers, a competitive team that travels throughout the Chicago area for regular-season games and as far away as Boston and Toronto for tournaments. Her daughter, Sophia, 10, is on three soccer teams and plays up to four games on Saturdays and Sundays.

“Sometimes I do wish we had more free time,” Holtzman says. “During the sports season, it’s school, homework, an early dinner and off to practice, which is driving one kid to one rink and another kid to a soccer field. Getting ice time is tough, so Andrew’s practices could be in the wee hours of the morning or late at night. We juggle a lot, and our family time is usually a goodbye kiss and a ‘See you later.’ ”

Yet Holtzman says it’s all worth it when she sees her children in action. “It is such a joy to watch them play so hard at something they care so deeply about,” she says. “The minute Andrew steps onto the ice, it’s like all his worries go away.”

With the kickoff of the fall sports season, parents across the Chicago area are navigating increasingly complicated weekend schedules, thanks to the growing professionalization of youth sports. Gone are the days when elementary-school-age children could hone their skills informally on the playground, alongside others their age. These days, sports-minded kids are increasingly steered toward privately run club or travel teams (the terms are used interchangeably), which emphasize sport-specific training and interteam competition. Traditionally, clubs offered a specialized opportunity for the gifted elite: Tryouts would cull the low performers, leaving only the best of the best.

But over the past decade or so, as new clubs sprang up and existing clubs expanded their rosters to “B” and “C” teams, the result was an arms race for talent. As talented players shifted out of traditional, low-stress, recreational leagues, parents in those leagues worried about their kids getting left behind. Now, among many parents, there’s an assumption that your children have to join a club if they ever want to get any better. Even the definition of a competitive travel sport keeps expanding, thanks to organizations such as Dupree Dance and U.S. Spirit, which organize regional and national competitions for dance troupes and cheer teams.

“There’s no doubt that the number of students who enter high school having competed in club sports continues to grow,” says Matt Troha, assistant executive director of the Illinois High School Association, the nonprofit governing body for high school sports. “It’s become a hot-button topic for our members.”

On the one hand, the level of play in some sports has gone up significantly; Troha points to girls volleyball as one example. But many coaches and athletic directors believe travel sports hurt participation overall. Elite teen athletes don’t even try out for their high school team—with its limited season—preferring to stay with their year-round club. Freshmen who’ve never played a club sport are intimidated to try out against those who have.

“Clubs are built on the idea that they will attract elite players, or develop them. But that can cause burnout at a younger and younger age,” Troha says. Some high school coaches also question what those young players have actually learned: “One concern we’ve heard is that many clubs focus on games more than practice,” says Troha. “There’s not as much emphasis on fundamentals.”

For Kevin Patton of Glenview, the pressure started when his son Brendan was 6. Brendan started playing soccer when he was 4 with the American Youth Soccer Organization, or AYSO, a nonprofit, volunteer-led group that embraces an “everyone plays” philosophy. But it wasn’t long before Patton and his wife started worrying about their son being left behind. “My wife and I wanted to give Brendan opportunities with better players, instead of him ending up on teams with kids who didn’t have basic soccer skills,” says Patton, who works in sales. After a few unsuccessful tryouts, Brendan was invited to join a club team when he was 9.

It didn’t turn out quite as his father had hoped. “After watching a couple of practices, I was pretty disheartened,” he says. “The coach definitely knew the game, but he was very negative. A kid would make a mistake, and the coach would take him out.” Patton was also concerned that the supposedly elite club seemed to be loosening its standards. “They took four teams in Brendan’s age that year,” Patton says. “If you’re taking the best players, there should be some cuts. When you’ve got three or four teams at each level, it just feels like a money grab.”

Last year, Patton switched Brendan back to his local AYSO team, which cost $165 for the year, as opposed to the club team’s annual fee of $1,200. “We may consider going back to club down the road, as my son gets older and wants to devote more time to the game,” Patton says. “But the move back to AYSO was the right decision. We still have the same issue with teammate skill levels, but it’s allowed my son to play with some of his classmates.”

The costs associated with travel sports make them emblematic of the growing inequality nationwide. In the Chicago area, club fees range from $1,000 to $5,000 a year—which doesn’t include competition-related expenses such as hotel rooms and meals on the road.

While the government doesn’t collect statistics on youth sports participation, the Sports & Fitness Industry Association found that 26 percent of children ages 6 to 12 were active “to a healthy level” in sports in 2015. That relatively low number, according to researchers with the Aspen Institute’s Project Play, is the result of a growing concentration of sports opportunities at the top. Those who can pay for club-level training have plenty of opportunities to excel, while those who depend on local recreational leagues are being left behind. The 2015 SFIA survey found that only 38 percent of children from homes with $25,000 or less in income played team sports, compared with 67 percent of children whose families made more than $100,000 a year.

Just as many parents overestimate how much their children’s sport will pay off financially, they underestimate the toll of competitive sports on young bodies. Dr. Glenn Reinhart, a pediatric orthopedic surgeon at Advocate Children’s Hospital in Oak Lawn, has seen a marked increase in sports-related injuries over the past 10 years. The reason? “Children are doing more sports in highly organized settings at younger ages,” he says.

Sports injuries in children fall into two general categories. The first is repetitive injuries from overuse such as elbow ligament tears, the kind of damage doctors used to only see in college players or pros. “The logical, simple solution is to stop doing the activity, because your body can recover if it’s allowed to rest,” says Reinhart. “But that’s often a hard sell to kids and parents.”

Even more serious is what doctors refer to as exposure risk: the more a young athlete plays, the higher his or her chances of a traumatic injury. Growing bodies simply can’t handle the same stressors as an adult, and a child’s badly damaged joint may not be repairable. A young soccer player who tears her ACL faces surgery, months of physical therapy and still may end up with permanent limitations.

Sports themselves aren’t the problem. “You want your kids to be as active as they can tolerate,” Reinhart says. “But not all physical activity needs to be competitive.” He’s concerned by the growing emphasis on organized activities and narrowing in on a single sport. “With children, you want to rotate which parts of the body get stressed, especially when they’re not yet fully developed.” Club sports—with their focus on drills, repetition and following a coach’s orders—put developing bodies under more strain than running around a park with friends.

As a father of two children who competed in sports at the collegiate level (in tennis and lacrosse), Reinhart understands the pressure parents face. “There are all these fallacies that you have to start young to be good at a sport,” says Reinhart. Medically speaking, that’s not the case. “You can only judge the true potential of an athlete once they’ve entered the puberty phase,” he says. “What happens a lot in youth sports is that a kid is good at a younger age because he or she happens to be bigger. But later, the others catch up, and that size is no longer an advantage. If you’re a really good athlete, you can wait until junior high to start playing competitively.”

Traditionally, school sports schedules were built around the ideal of the three-sport athlete, who played football in the fall, basketball in the winter and baseball in the spring. But that well-rounded player is being replaced by specialists, with the sorting being done at younger and younger ages. Organizations such as the American Orthopaedic Society for Sports Medicine and Little League Baseball now produce recommended training limits for young athletes in an attempt to cut down on injuries. But as long as the culture around youth sports values competition over fun, the battles over how much is too much will continue.

For 11-year-old Andrew Holtzman, however, there’s no such thing as too much hockey. “I love being on the ice—even when it’s a 6 a.m. practice,” he says. And all those early mornings and late nights and weekends on the road have built a teamlike camaraderie among the players’ parents. “We’ve made friendships that will last a lifetime,” says Michelle Holtzman. “It’s like we’ve created our own hockey family.”