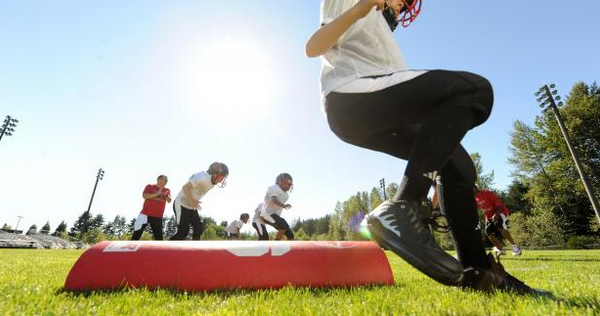 Wrap a band around a firm post or use a partner to resist you
Get a weighted medicine ball, preferably one you can throw without damaging
Start in a low, athletic stance with your power leg slightly behind your opposite leg
On “go,” drive your hips forward fast and punch the ball forward as far as you can.
Use the ball’s momentum to carry you forward and sprint two to three yards
Repeat

Have a partner stand 10 to 15 yards in front of you with a tennis ball in each hand
Sprint toward your partner
Just before you get to him, your partner drops one of the tennis balls to the left or right
Plant your outside foot, make a break toward the ball and catch it

Defenders, especially linebackers, need to be able to transition from a backpedal into a forward sprint. Use your arms to help your legs make this adjustment.

Face your partner with a resistance band around both of you
Set three cones behind your partner about 10 yards away, one to the right, one to the left and one directly behind him
On “go,” start your backpedal with your partner resisting you
Your partner yells “left,” “right” or “middle”
Transition from a backpedal to a forward sprint to the designated cone as fast as you can

Develop lateral power, running efficiency and explosiveness while running with the ball by using your upper body to drive your lower body.

Set up five cones about five yards apart in a zigzag pattern
Get a weighted medicine ball, one that you can slam
Start on one foot at Cone 1
Bound from cone to cone and slam the ball outside of your foot at each cone
On the last cone, slam the ball away from your body and take off in a sprint

This ladder drill with a medicine ball helps build a separation between upper and lower body movement efficiency along with foot speed, quickness and agility.

Perform the “Ickey Shuffle” through a speed ladder while keeping your head up
As you move through the ladder, your partner randomly tosses you the ball at chest height
Catch the ball and punch it back to your partner while maintaining footwork pattern