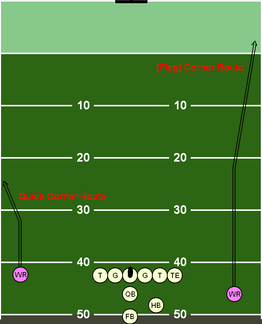 The post corner route, also known as the flag route is a good route to run for receivers that can make sharp cuts, and can keep their composure in tight spaces. If run properly, the post-corner can really have the defense at your mercy.

Here are the steps necessary to run a post corner route:

If the cornerback plays off of you the release will be easier. You’ll start your route by running straight at him full speed, hoping he’ll think you’re running a fly route. If he tries to jam you, you have to make sure you get the inside position. Be ready to get bumped off the route just a bit, but fight him off as best you can and don’t let him pin you to the sidelines. The route will be ineffective if he wins that battle. If the defense is playing zone, you’ll be in good position to find a gap.

Run 15 yards up the field, and then you’ll make your first cut. It will be to the inside, so you need to plant your outside foot, while you’re still looking straight ahead, and then make the cut. It should be at about a 120-degree angle. This will make the corner think you’re running a post pattern.

The second cut will be much sharper. Once you get to the hash marks you’ll want to plant your inside foot and make a sharp cut, this time at about a 50-degree angle. At this point, even if there is a safety helping out over the top, you’ll have at least a step on the defensive back. At this point the corner will probably have his hands on you, so you may have to fight to break free. Even if he doesn’t grab you, contact can slow you down, and that type of hand-checking often goes unspotted by the referee. I good trick that I use to do is sale the post route to the defensive back by taking a few steps inside after my cut and raising my hand as if I’m anticipating a catch. As soon as the defensive back opens up in that direction, I quickly make a sharp cut to the outside of the field to complete the flag/post-corner route.

Next, look for the ball. Once you’re headed for the sideline, turn around and look for the ball over your outside shoulder. There is a good chance it could have already been in the air before you made your cut if you’re working with an experienced quarterback that can read the field well. You’ll need good concentration to catch a ball over your shoulder while headed towards the sideline along with great field awareness, but if you execute the post corner route properly, it can be a game changing play.