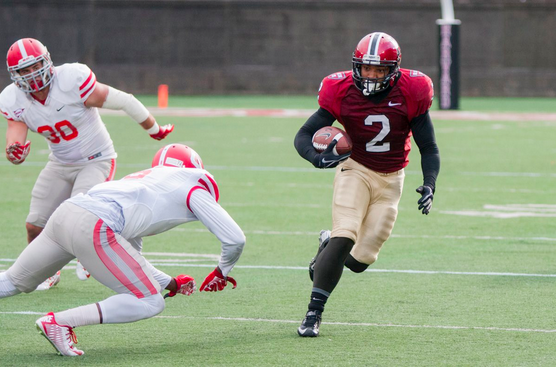 The Brick Wall punt return formation is easy to install and can vastly improve your team’s return yardage on punts. Solid punt returns will provide your team with good field position, and make the offense’s job easier.
Rocko & Leo

On the contrary, if the coach calls ‘Leo’, the punt return is to the left side of the field.
Building the Brick Wall

L1 & R1 – These players are responsible for keeping the ‘bullets’ (punt coverage players aligned the widest) from sprinting down field to make the tackle. They align to the inside shoulder of the bullets, and bump-and-run with them all the way down the field. L1 and R1 are not to allow the bullets to get to the inside. They help to keep lanes open up the field for the return man.

L2 & R2 – These players are responsible for rushing the punter.

Interior Line – These players will fire out and make contact with the punt team’s blockers, making certain that there is no punt fake. Once it is determined that there is no punt fake, they will quickly release and run to the designated areas down field, turn and look for an opponent to block. In order to create the wall, these players should be no farther than five yards apart.

LR & RR – These are the punt returners. One of the player receivers, while the other one blocks. The player not receiving the punt will lead the way to the wall for the punt returner, serving as an additional blocker.
Coaching Points

Remind the nose tackle that he cannot hit the center while he is snapping the ball. Some leagues protect the center totally, while others will allow the center to be hit after he lifts his head up and is looking forward. The rules vary be league.
Make certain that the interior line and the return team’s linebackers do not leave too early to go down field to block. A tendency like that will lead to an opportunity for the opposition to successfully run a fake punt.