There are a few simple drills you can add to your practice plans to help your running backs make more effective cuts. While some of your very athletic players with excellent body control already instinctively make effective cuts, you will need to teach the rest of your players. Making cuts is all about body control. The problem is many youth football players simply have yet to develop a strong core and don’t yet understand how to effectively control their bodies. Sure you may have players that can run very fast in a straight line, but how may non special-teams 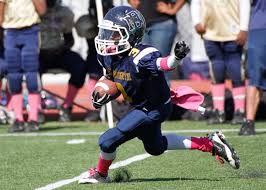 There are a few simple drills you can add to your practice plans to help your running backs make more effective cuts. While some of your very athletic players with excellent body control already instinctively make effective cuts, you will need to teach the rest of your players. Making cuts is all about body control. The problem is many youth football players simply have yet to develop a strong core and don’t yet understand how to effectively control their bodies. Sure you may have players that can run very fast in a straight line, but how may non special-teams plays in youth football are run in straight lines for over 30 yards at a time?

The game is played in short 5-10-15 yard bursts with lots of small changes in direction. The player that excels in the player who can start, stop, accelerate and make cuts without slowing down much. In order to make those cuts, the player must lower his center of gravity. Did you ever see Barry Sanders run? Every time he went into a cut, he dropped his hips so low to the field, it looked like he might drag his rear on the carpet. That is not an instinctive move for most youth running backs, it must be taught. Start first by just having your backs run a 7 yard sprint as a group, blow your whistle after they hit the 4 yard mark ask them to drop their hips (not their shoulders) about 6 inches for the duration of the 3 yards. Their backs are still straight at this point, we don’t lean forward into cuts.
This drill may look a bit awkward and feel uncomfortable to start with, but it is the very first skill a youth running back must develop to cut effectively. If a player is struggling a bit you can even hold a pole out across his path over his head, but held low enough that he has to drop his hips to pass under.

Once your kids start to consistently run that drill well, it’s time to let them try the skill out. Have them run the zig zag drill. Put about 6 cones out about 7 yards apart at 45 degree angles to themselves, creating a zig zag pattern. Without carrying a ball, have the players go the first cone to the right, lower their hips and touch the cone with their outside hand, planting their outside foot, and then heading to the inside to the next cone, then doing the same with that cone, accelerate, lower the hips touch the cone with the outside hand and plant the outside foot and head to the inside to the next cone. Next add a football and have them seat the ball high and tight and switch balls to the outside arm after making each cut. When they run left, ball is in the left arm, when they run right, ball is in the right arm. You can add a ball security portion to the drill by stationing coaches or players along the path to swat at the ball.

Most cuts in youth football aren’t as sharp as 45 degrees and don’t involve coming to a complete stop so for the third phase of this drill, we make a few changes. Put your long bags out parallel to each other about 3 yards apart, 4 should about do it. Place a cone about 2 yards outside dummy. Start the running back out at one end of the first long dummy and have him run to the edge of it, lower his hips, cut making sure NOT to run past the cone and run to the far edge of the next dummy in line, drop his hips, plant on that outside foot and run to the far edge of the next dummy. After one rotation through, add a football and ask them to change arms to the outside arm as we did in the previous drill.
Next we want to work on how to keep speed through a cut. Put cone X about 5 yards in front of a starting point cone Y which is at an imaginary line of scrimmage. Then put 2 cones about 1 yard away and 1 yard apart from each other at about a 60 degree angle to the right of Cone X. Now have the back approach cone X at full speed, about 2 yards from the Cone X blow your whistle as a signal to have the player drop his hips. Just before the player gets close enough to touch the cone, he cuts and runs between the 2 cones set at an angle to Cone X and sprints to a cone Z set 7 yards further away. This cone is set along the same 60 degree angle. Then add a football to the drill. Next instead of having the angle of the final Cone Z be along the same 60 degree angle, make it 90 degrees from the parallel cones after the cut. You can even add a squeeze portion of the drill by placing 2 coaches or players with hand shields at Cone Z and make the runner run through traffic and sprint to another Cone W set 5 yards past Z.

Next change add parallel cones at a 60 degree angle to the left of Cone X. Choose the left or right side before the drill starts for the running back, so he gets used to cutting in both directions. We are looking for lowered hips, very little slowing for the cut and explosive sprinting off of the cut. Now to help the player get used to making split decision of which way to cut, stand at Cone X and move your shoulders in one direction or the other just as the player gets in front of you. If you move your shoulders to the left he cuts right, you move right he cuts left. This will help your back improve both the precision of his cuts, but in which direction to make them.

Developing fundamentals is key at any age, but especially in youth football. Note that we like to add that final drill to our offensive running back play skeleton drills. We will run 16 Power with this drill set up at the 6 hole. This way the rest of our backfield can get reps in with blocking at the point of attack on shields or dummies while the running back gets drilled on fundamental running back drills. You can just adjust the drill to the hole you are running. To save time obviously you are going to rep just one play extensively before moving to the next one instead of rotating the plays.

Copyright 2010 Cisar Management, all rights reserved. This article may be republished but only if this paragraph and link are included. http://winningyouthfootball.com