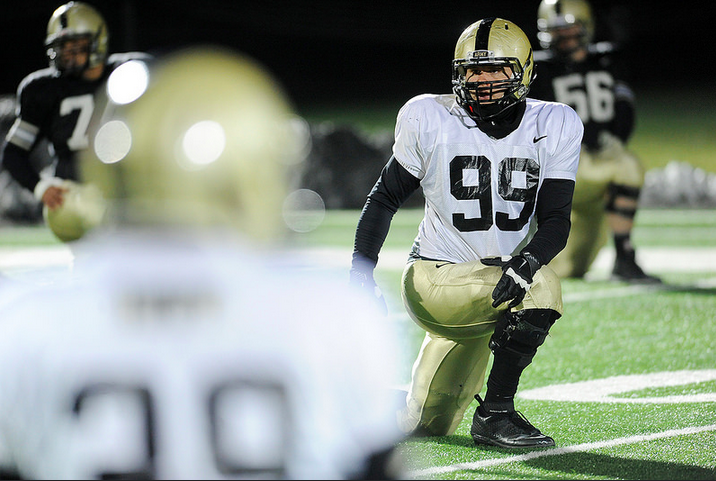 The defensive end is one of the most important players on the football field. The defensive end has two major responsibilities: He must be able to stop the opponent’s running game, and he must put significant pressure on opposing quarterbacks. His goal is to “sack,” or tackle, the quarterback, or get a hand on a thrown ball so his teammates can intercept the deflected pass.

The defensive end must find a way to control the offensive tackle with his hands. In this drill, you will start with your hands on the outside portion of the offensive tackle’s shoulders. On the coach’s whistle, you will try to turn his shoulders so his back is toward the center of the line. At the same time, he will try to keep you from doing this by staying in a position where his chest is facing your chest. If you can turn him, you can sprint past him and into the opponent’s backfield and get after the quarterback. If you can’t, the tackle offensive tackle has neutralized you. Do this 10 times; to be successful, you must win at least half the battles.

This is one of the best moves a defensive end can use to throw off the tackle and get to the quarterback. In this drill, you will have to get past three tackling dummies. Line up the tackling dummies about three yards away from each other. On the coach’s whistle, sprint to the first one. As you get to the dummy, push it to the left with a hard, two-hand blow. Hammer the second dummy with a hard two-hand blow to the right, then hammer the third dummy to the left and get after the quarterback. The key is to do this drill with speed and quickness. You must get the dummy on the ground, and you can’t slow down. This will help you work on your speed, quickness, hand-eye coordination and power.

In order to be an effective defensive end, you must win the battle of leverage with the offensive tackle who is trying to block you. When you line up at defensive end, you have a bit of an edge over the tackle because you can line up two steps to the outside and get a running start in your effort to get past. He will try to hammer your inside shoulder as you attempt to speed-rush him. If you can get your shoulder lower than his pads, however, you will have the edge in leverage, and make it difficult for him to stop your pass rush. This will make you a dominant and consistent pass rusher.