American football is a team sport that is characterized by short duration, high-intensity bouts of exercise followed by brief recovery periods (25-40 s) (Craig, 1968). The physical demographics of the athletes are quite variable depending on the position played; skill players are typically lean and quick, whereas the linemen are larger individuals with both larger muscle and fat masses. Depending on the league and level, all athletes must wear protective equipment during participation that is comprised of a helmet, shoulder pads and pants with hip, thigh, knee and tailbone pads. During competition, the game is split into four quarters of roughly 12 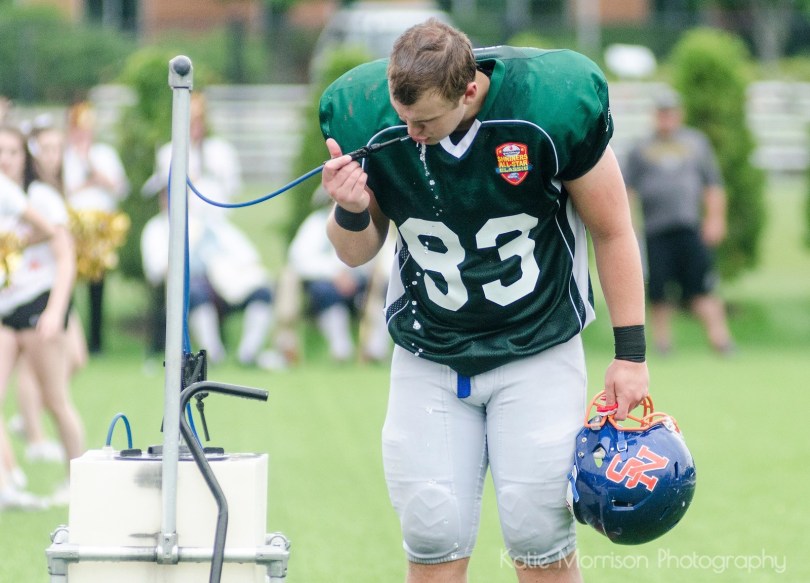 American football is a team sport that is characterized by short duration, high-intensity bouts of exercise followed by brief recovery periods (25-40 s) (Craig, 1968). The physical demographics of the athletes are quite variable depending on the position played; skill players are typically lean and quick, whereas the linemen are larger individuals with both larger muscle and fat masses. Depending on the league and level, all athletes must wear protective equipment during participation that is comprised of a helmet, shoulder pads and pants with hip, thigh, knee and tailbone pads. During competition, the game is split into four quarters of roughly 12-15 min each. After the second quarter there is a halftime that is between 12-20 min where athletes are permitted a break from exercise. The distance covered by football athletes is highly variable with wide receivers and defensive backs covering the most distance and linemen covering the least distance during the game. However, a tradeoff exists, in that the linemen, although they do not cover much distance during competition, are required to utilize short, high-intensity bursts of muscle power and strength (DeMartini et al., 2011). Evidence also exists to suggest that fluid needs and sweat losses are highly variable in football players (Godek et al., 2008). Linemen have been observed to lose large amounts of sweat due to their size and body mass, requiring large amounts of fluid to offset the sweat losses (Godek et al., 2008).

During exercise, the risk of dehydration is high due to increased sweat rates to aid in thermoregulation. In American football, the risk of dehydration is further increased due to the timing of the season (late summer into fall) where athletes are exposed to extreme environmental conditions (high ambient temperature and relative humidity) and the required protective equipment that may hinder heat dissipation during exercise (Armstrong et al., 2010; McCullough & Kenney, 2003). Other considerations are the size of the athletes, particularly the body surface area and overall mass of the athletes since larger individuals have a greater number of sweat glands and produce more sweat than a smaller individual (Godek et al., 2005a). It has been observed that linemen have decreased evaporative heat losses compared to non-linemen due to the relative static nature of their position and lack of airflow to the skin (Deren et al., 2014).

The combination of high environmental conditions, the requirement to wear protective equipment, and large muscle and/or fat mass increase a player’s sweat rate in order to attempt to dissipate the heat that is produced from the working muscles. During exercise, 75-80% of the energy that the working muscles use is converted to heat that is stored in the body (Shirreffs, 2005). In order to prevent body temperature from reaching dangerous levels (>40°C/104°F) that could potentially lead to exertional heat stroke (EHS), the body uses conduction, convection and evaporation of sweat from the skin to dissipate the metabolically produced heat. In high environmental conditions, evaporation of sweat from the skin is the only mode of heat dissipation from the body during exercise. The reduction in evaporative heat loss in individuals wearing American football equipment poses health and safety risks to the athletes by retaining the metabolic heat and increasing the risk of EHS. This has been evident at the high school and collegiate levels where deaths from EHS have been attributed to factors such as extreme environmental conditions and dehydration (Boden et al., 2013; Grundstein et al., 2012).

The goals of this Sports Science Exchange are to: 1) provide scientific guidelines needed to maintain a state of euhydration, 2) discuss the importance of hydration for both performance and safety in American football players and 3) provide practical recommendations for American football players, coaches and medical personnel to maintain a normal and safe hydration status during both practice and competition.

EFFECTS OF DEHYDRATION ON PHYSIOLOGICAL FUNCTION AND EXERCISE PERFORMANCE
Dehydration causes both cardiovascular and thermoregulatory strain that can reduce exercise performance. During prolonged exercise, the body undergoes a physiological change called cardiovascular drift, where heart rate (HR) increases to counterbalance a decrease in stroke volume (SV) to maintain cardiac output (CO) for continued exercise. The decrease in plasma volume resulting from dehydration causes an increased HR in order to maintain the delivery of oxygen and other substrates necessary for the body’s contracting muscles (Montain & Coyle, 1992), thus exacerbating cardiovascular drift. Evidence also shows that for every 1% of body mass loss, HR increases by 3 beats/min (Adams et al., 2014).

Exercise performance is adversely affected by increasing levels of dehydration. During exercise in the heat, there are increasing demands of blood flow to both the muscles and skin to maintain muscle function and for thermoregulation. Blood flow to the skin is imperative for the body to move the metabolically produced heat to the periphery and to enable heat loss via sweating. As the level of dehydration increases, the competition over blood flow between the working muscles and skin blood flow is increased, causing a reduction in performance due to the reduction in venous pressure and cardiac output to support both the metabolic needs of exercising muscles and thermoregulation (Cheuvront & Kenefick, 2014; Cheuvront et al., 2010).

The inability to restore all fluid losses during exercise could be explained by the high fluid losses experienced by the players during practice, the inability to replace these large fluid losses during and between practices and poor hydration practices outside of practice (Stover et al., 2006). It has been observed in professional football players (unpublished data) that their hydration strategies during practice or training were adequate to replace their sweat losses, but their hydration practices outside of the training facility were poor. This resulted in football players continuously arriving to practice and training in a hypohydrated (fluid deficit) state. This caused a persistent state of hypohydration on a day-to-day basis, which can have adverse effects on performance over time. Also, during intense exercise in the heat, the implications of inappropriate hydration practices during activity can place increased thermoregulatory and cardiovascular strain on football players that can increase the risk of heat illness and cause a subsequent decline in performance (Table 1).