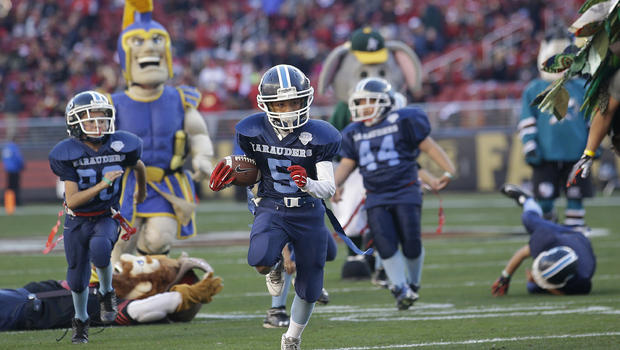 Football safety has progressed by leaps and bounds since the days when the “flying wedge” – the human battering ram linked to multiple deaths in the game each year during the late 19th century – was officially outlawed.

SAFE PRACTICES Changes made by leading youth football organizations seek to minimize the risk of brain injuries during practice. (photo © The Palm Beach Post/ZUMApress.com)
Football safety has progressed by leaps and bounds since the days when the “flying wedge” – the human battering ram linked to multiple deaths in the game each year during the late 19th century – was officially outlawed. But today several organizations are attempting to make football safer still, particularly at the youth level. Pop Warner, the nation’s largest youth football organization, announced new rules for the 2012 season limiting the type and amount of contact drills allowed during practice, and in August, USA Football, the NFL’s official youth football development partner, rolled out a new set of age-specific contact drill practice plans for coaches. Since the state of Washington passed the first concussion legislation in 2009, 37 states have followed suit and six more had legislation pending as of July.

“You’ve seen a lot happen in the past three years,” says USA Football director of communications Steve Alic. “It’s a positive change for all youth sports. There’s an increase in knowledge and sophistication in youth leagues addressing player health that you didn’t see five years ago. You’re seeing youth sports as a whole becoming smarter on this issue.”

Even in those states where legislation is lagging or for programs that aren’t a member of an organization like Pop Warner, coaches and administrators still need to be proactive. “You can’t be alive and read a paper or watch TV and not have seen horrific things,” says Mark Rice, president of Illinois’ North Shore Youth Football League. “There’s definitely an impact on parents and even the kids. We have discussions all the time with people who watch TV, apply that to themselves and are in complete fear of their children playing football.”

A wealth of concussion research has come to light in recent years, including a study published this past February by Virginia Tech and Wake Forest that found that not only do youth football players suffer hits comparable to those of professional athletes, but the majority of youth head injuries occur during practice. In response, Pop Warner now limits the amount of contact drills allowed to one-third of total practice time and has banned full-speed, head-on drills.

The rules may be new, Rice says, but the concept has been emphasized during Pop Warner coaches’ training for years. “There are some coaches out there that emulate what they see on TV and replicate that with children,” he says. “That’s nonsensical and foolish. Fortunately, for the most part, programs, administrators and coaches are part of a league like Pop Warner. We’re already aware of what’s appropriate and inappropriate in terms of how we handle our practices and the kids. While we didn’t have these new written concussion polices that have just come out, these are things we’ve already been doing.”

But organizations like Pop Warner and recreation departments are holding their coaches and volunteers to a greater level of accountability, Alic says. “What you’re seeing is leagues taking the USA Football course or another nationally accredited coaching course and mandating it. Leagues across the country employ our resources and education, and adopt them as their own. You didn’t see that 10 years ago or even all that much five years ago.”

Limiting the amount of contact during practice reduces the opportunities to sustain an injury, but Alic stresses that it’s just as important to consider the type of contact. “If it’s nonsensical contact for youth players, even five minutes is too much,” he says. “There are drills that are or were done in the NFL that are advanced and scary; you would never want to put children in those situations.”

USA Football recommends progressive levels of contact – running a drill without opposition, then moving on to tackling bags before progressing to player-on-player contact but not taking a player to the ground. “But it goes back to the fundamentals – learning how to tackle properly,” Alic adds. “When a player is taught how to tackle properly, it instills confidence. You’re ready, you’re prepared for a game.”

Teaching proper tackling technique is at the core of prevention, Rice agrees. “We spend an extraordinary amount of time teaching our kids how to keep their heads up and to never use their heads in a tackle or use it as a weapon,” he says. “When you do that, you’re really going to avoid a lot of the problems.”

Concussion awareness serves as something of a catch-22: Attempts to make the sport safer by raising awareness of the risk also stir fear among parents. “We’re helping kids to stay even safer than before, but you would think by what you read that it’s the exact opposite,” says Rice.

Between 2001 and 2009, the Centers for Disease Control and Prevention reported a 60 percent increase in emergency room visits related to traumatic brain injuries among athletes under the age of 19, but some experts argue the increase reflects a greater awareness of concussions and concussion symptoms than an actual increase in injuries.

“To the extent that football is a contact sport and can be dangerous, it is now much safer than before,” Rice continues. “The equipment is better, the education is better and the rules are better. But every conference I go to, it’s the same thing: ‘What do we say to the parents? They’re convinced that everyone who plays football is going to die. What do we do as administrators and coaches?’ Obviously, first and foremost is doing everything we can to make sure the kids are safe, and then communicating that to the parents to give them some peace of mind.”

The new policies, in addition to formalizing what many coaches already practice, are one way to assure parents concerned for their child’s safety. “What we’re doing now more than before is educating the players, families and coaches on how to detect concussions,” says Rice. “Of course we try to prevent concussions, but just as important, if it were to happen, we want the kids, families and coaches to be aware of the symptoms.”

That was the aim of the Protection Tour, a set of camps hosted by USA Football and the NFL in July that brought doctors and experts to communities to educate parents, players and coaches. Proper tackling technique was just the first of the tour’s three components. In the second component, doctors and experts went over the signs and symptoms of concussions. “The audience for those was parents,” Alic says. “All of this is included in our coaching education course, but parents should be made aware of those signs and symptoms, as well.”

The last component is equipment fitting. “It’s often an overlooked aspect of youth sports,” Alic says. “The helmet needs to fit the right way to utilize it at the highest level of protection.”

The goal of the camp was to send players home with the skills and tools they need to play safely, parents with the right questions to ask and coaches with the answers. “It’s important for parents to ask for every sport that their children play, first of all, ‘How are your coaches trained to properly teach this game to my child?’ and then, ‘What kind of training or education have they undergone regarding concussion management?’ ” Alic says, noting that concussions are a concern in almost any sport. “Leagues doing things the right way will easily be able to answer those questions.”

As for the question of whether reduced contact during practice might put players at a competitive disadvantage during a game, “nobody cares,” says Rice. “Winning doesn’t even enter the equation. Any good coach or good parent is most concerned that their children are safe, but also that participating in an activity is going to build self-esteem and self-confidence, and that the coach is going to be positive with the kids.” What’s more, that self-confidence drives enthusiasm among youths on the field, which, combined with proper skills, will lead to wins. “We tell the kids that winning is a by-product of all the things we do and not the primary focus,” Rice says, though he admits that there are coaches who don’t subscribe to the same attitude. “I know they exist out there. Like in any endeavor, there are always a few crazy people.”

The changes are just a natural part of the game, Alic adds. “Football’s heritage and history is based on continual change and improvement,” he says. “This is just the latest example of that. And it’s not just football. Every sport has become a lot smarter with regard to how a concussion is addressed and treated. Player safety in all youth sports warrants that kind of commitment.”