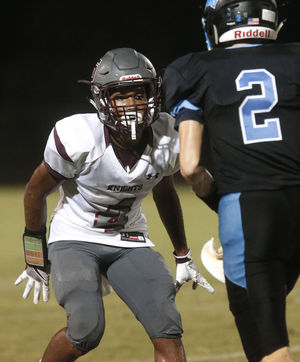 Here are some tips I use when teaching defensive backs. You can get more advice by heading to CoachT.tv and ordering the youth football DVD series.

Think Pass First
Even at the youth level, it’s important for the defensive back to always think “pass” first. At the point when he is certain it is not a pass, he can commit to the run and pursue the ball carrier. There are many keys for the defensive back for determining run or pass. His keys for determining run are when offensive linemen are moving downfield or when the ball crosses the line of scrimmage. Also, it’s usually a run if the wide-out sustains a block.

Turn the Play In
At the earliest age, cornerbacks must be taught to turn the play in. The fact is, most touchdowns are scored around end in the first three years of youth level football. The running back makes the corner and is gone. In the event a back reads run, it is important that the back contains the ball carrier to the inside. Eliminating the sideline run or “turning the play in” becomes the defensive back’s primary run responsibility.

Backpedaling
There are many techniques for defending the pass receiver. The most essential and basic incorporates the backpedal.

In this technique, the defender must keep his torso forward with his chin over his toes and shoulders over his knees. The head is down with elbows bent at about 90 degrees. This helps keep his balance and allows for sudden breaks on short passes.

In the backpedal, the defender steps back quickly while driving his arms hard. He should be stepping back and not leaning on his heels, which would cause his body to become erect and slow him down. Utilizing small to medium steps at three-quarters speed with feet close to the ground will allow for a quick change of direction. He should always be in a proper leveraged position.

Turn and Go
At the point where the defensive backs cushion with the receiver is less than three yards, the defender should whip his arm toward the receiver’s running direction when he breaks. This enables a quicker change of direction.

Remember, the goal of the wide receiver is to get head-up with the defender as quickly as possible and make him turn and run in the shortest amount of time. Figure that the backpedal will work for about 12 yards. Within three yards of the receiver, the defender will have to turn and run with the receiver. Again, always maintain a three-yard cushion if possible.

Bump and Run
To avoid the deep passes, DBs may want to try and jam the receivers with a “bump and run”. This technique must be done within five yards of the line of scrimmage. It’s designed to disrupt the receiver’s route and mess up the timing of the play.

The actual jam used in the “bump and run” can be as simple as striking the center of the receiver’s chest with the hand nearest the receiver. Or, it could be the hand shiver–delivering a hit with the palms open and thumbs up. The blow should be struck low in the numbers and go “through” the receiver.

Good Attitude
Finally, stay positive. As you may know if you checked out CoachT.tv, I’m a high school and youth football coach as well as a first grade teacher. Next to teaching the fundamentals and having fun in a team environment, instilling confidence in your youth student-athlete is probably the most important thing you can do. Don’t spend all your time on points of improvement. Rather, tell them the five things they did right before getting to the things they could improve upon. Start positive, offer advice, end positive.
Active logo Find a football league or team near you.