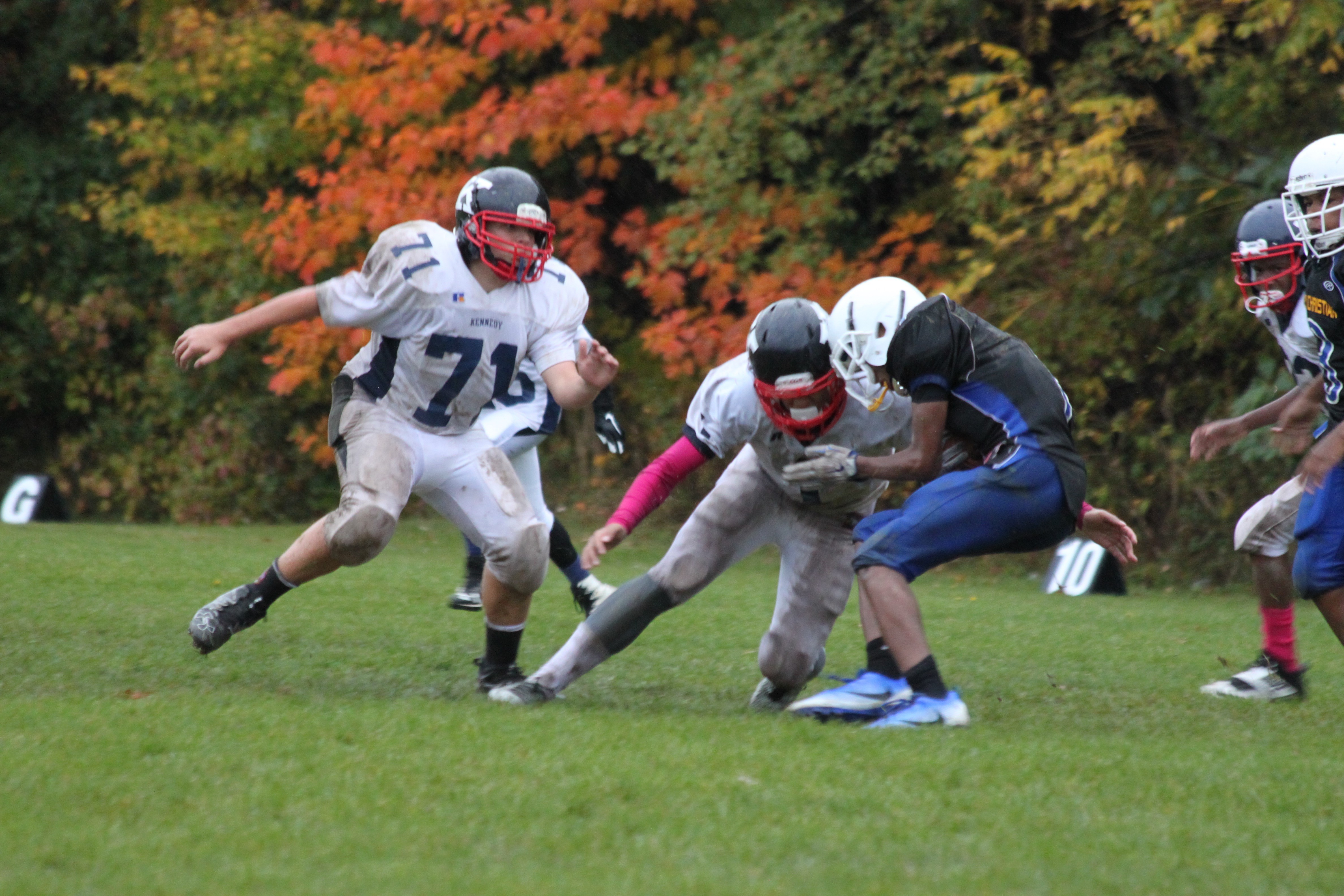 In the last few years, we have incorporated these tackling-technique drills into our practices twice a week, every week. These drills stress the fundamentals of tackling, which help develop better tacklers…and, ultimately, gives your defenders confidence in their individual abilities.

The team is divided into four groups of eight players in each group. There are five drills to complete. After one to two minutes, depending on the size of each group, players rotate to the next tackling station on the field. These drills are all based on techniques of safe, proper-tackling progressions.
During these drills, stress proper tackling fundamentals such as:
✗ Eyes on the ball.
✗ Feet shoulder-width apart.
✗ Proper angles in the knees and ankles.
✗ Chest out with arms ready to wrap about the ball carrier.
✗ Feet continue to run through the ball carrier.

This drill involves arranging four cones in a diamond shape. At opposite corners, the group is divided into tacklers (X) and ball carriers (RB).

The coach, standing near the ball-carrier line, watches each tackler’s technique to commend or correct every player. Have every player switch lines to run through each position once.

Tackling Sled & Directional Takedown
The drill consists of a right- and left-shoulder tackles after a short run at the tackling sled.

Tackling3DIAGRAM 3: Tackling Sled & Directional Takedown.The coach positions himself to the side of the tackling sled. The tackler works to maintain proper tackling position during the short run to the tackling dummy. The goal is to hit the dummy with the proper technique and be as forceful as possible.

As the dummy is hit and wrapped, the tackler tries to take it to the ground toward the shoulder making the contact. The wrap is not released and the feet do not stop until the dummy is on the ground. Each player makes a tackle using each shoulder.

Each player in line performs the same sequence. After every player goes in one direction, have them come back going the opposite way but keeping the same roles. If there is enough time, switch the lines, so the players get a chance to be in the other role.

This drill uses the 12th defender — the sideline. In this drill, place two cones 5 yards apart along the sideline. A third cone is placed 5 yards from the sideline. The coach stands by the third cone to commend or correct each player. The players at the station are separated into ball carriers and tacklers.

The tackler keeps his focus on the ball carrier’s (closer to the field) hip and shoulder, so to keep him squeezed to the sideline and not to let him escape back to the field.