Every year, college football strength coaches get a new batch of freshmen they need to whip into shape. Some of these athletes did a great job with their training in high school by either working with a strength coach or becoming knowledgeable lifters who know their way around the weight room. Others fall prey to broscience myths, only care about how much they can bench press and can't squat or deadlift with decent form to save their lives. Unfortunately for the latter group, the transition to a collegiate program will be far more daunting. The athletes who trained properly 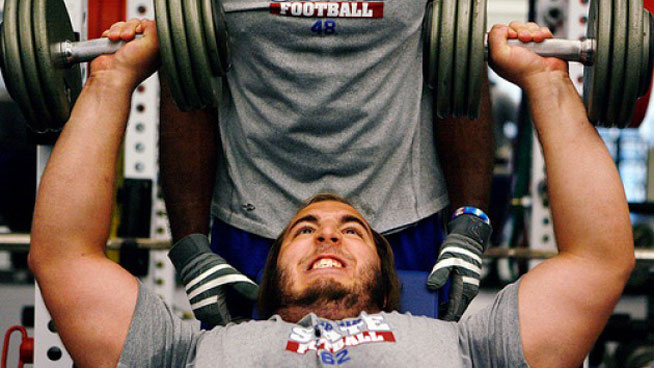 Every year, college football strength coaches get a new batch of freshmen they need to whip into shape. Some of these athletes did a great job with their training in high school by either working with a strength coach or becoming knowledgeable lifters who know their way around the weight room. Others fall prey to broscience myths, only care about how much they can bench press and can’t squat or deadlift with decent form to save their lives.
Unfortunately for the latter group, the transition to a collegiate program will be far more daunting. The athletes who trained properly in high school can get right to work on getting stronger while the others are stuck learning the basics and correcting bad habits.
When a roster spot is on the line, that’s the exact opposite of what you need to be focusing on.
To help you avoid common pitfalls, we talked with three of the top collegiate strength coaches at the 2017 Cincinnati Hammer Strength Clinic to learn about the mistakes they commonly see with incoming freshman football players and what you can do to get ahead of these issues.

“You have it on one end of the spectrum of over training—almost too much of skill development and not enough strength training,” he says. “And then you’ve got it to the other end of the spectrum where it’s meatheads in the weight room just throwing around weights and not becoming complete athletes.”
Walk through any unsupervised weight room and you will likely see this situation play out. Multiple benches will be filled every day, but the lone squat rack goes unused. Or you’ll see an athlete who has phenomenal skill potential but can’t even deadlift his body weight.
In reality, every football player needs to make strength training a priority because strength, power and speed are such critical components of the game. As Marotti alludes to, you need a program designed to make you a better athlete, not just to lift more weight or build bigger muscles.
“We don’t really care how high guys jump in a vertical jump. We don’t care how much they bench press. It’s not who we are,” he says. “It’s about where they start, where they’re going to finish and how they’re going to get there. And that’s what our program is based on.”
Even more important than the program, Marotti explains that you need to bust your butt to get results.
“Our philosophy is based on what we call a weight room culture,” he adds. “It’s based on effort, toughness, performance and accountability.”

Many high school athletes have a “more is better” mindset, which is hard to blame. Lift more weights more frequently and get stronger, right? Unfortunately, it doesn’t work this way and doing too much can often sabotage your results and cause your body to break down.
“One of the mistakes I see in training is trying to do too much,” says Boyd Epley, Assistant Athletic Director for Strength and Conditioning at the University of Nebraska, “In many cases, less is actually better.”
He points to how many athletes structure their workouts. For the most part, you can pick a primary compound exercise such as the Squat and do four or five other exercises to effectively build strength. If you find yourself trying to cram 15-20 exercises in a workout, then you’re likely doing too much and are more likely to build endurance rather than strength.
Epley also comments that athletes need to give themselves time to train. While playing multiple sports is almost universally recommended to become a superior athlete, you still need to give yourself an offseason to get stronger.
“If there’s no offseason those athletes aren’t going to have the physical development that the other athletes have. They don’t have that opportunity,” he explains. “So you’ve got to pick and choose which kind of sports you want to be good at and then have an offseason period to train.”

One of the easiest areas of your body to neglect is your neck. There’s no real way to measure neck strength and it’s not like you’re competing with your friends to see who has the strongest neck like you might on other lifts.
But according to Brady Collins, Director of Football and Sports Performance at the University of Cincinnati, training your neck is a non-negotiable requirement for a football player.
“The number one issue with all the sports right now and not just football is concussions, he says. “It is because kids do not train their neck.”
A strong neck helps distribute contact forces through your entire body so your head doesn’t move so fast. If your head doesn’t move as fast, then theoretically less force is transferred to your brain, reducing the severity of a concussion or preventing it entirely.
A 2014 study supports this theory, finding that the odds of a concussion decrease as neck strength increases. This is especially important for high school athletes transitioning to college and playing with athletes who are bigger and faster.
“I think the most important thing you can do is build that mass in that neck and the upper back muscles to help dissipate that force,” he adds.
If you’ve never trained your neck, these exercises are a great starting point.