Jillian Pransky wasn't always the calming, glowing presence she is today. Twenty years ago, the New Jersey-based yogi was as fired up by the corporate ladder as she was by the step classes and rigorous marathon training she subjected her body to. If it was hard, she was into it, and as a natural result, she was sometimes as stressed as the students who now flock to her slow-flow vinyasa and restorative classes. But working ferociously to maintain her weight stopped making sense once she discovered what scientists are just beginning to understand: Yoga—even the gentlest of styles— 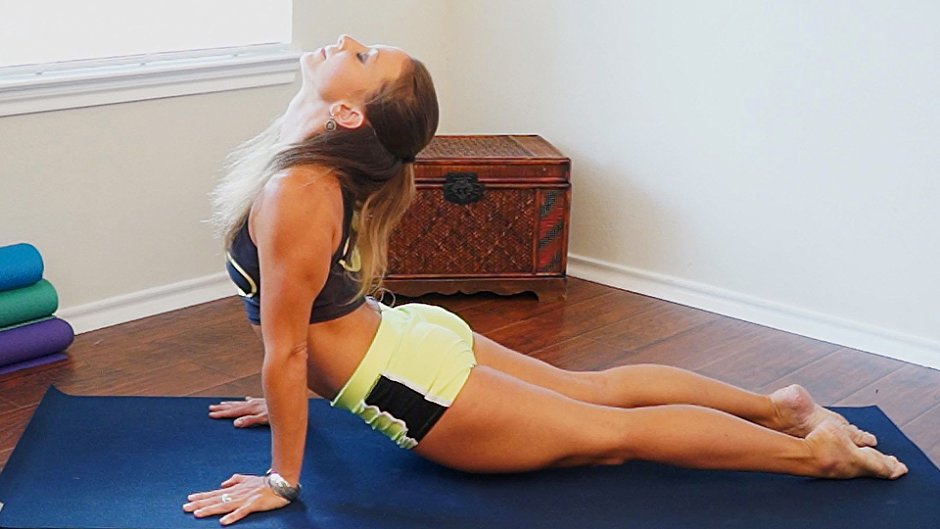 Jillian Pransky wasn’t always the calming, glowing presence she is today. Twenty years ago, the New Jersey-based yogi was as fired up by the corporate ladder as she was by the step classes and rigorous marathon training she subjected her body to. If it was hard, she was into it, and as a natural result, she was sometimes as stressed as the students who now flock to her slow-flow vinyasa and restorative classes. But working ferociously to maintain her weight stopped making sense once she discovered what scientists are just beginning to understand: Yoga—even the gentlest of styles—has an uncanny ability to make everything in life a little easier. Including weight loss. “I haven’t worried about my weight for over 10 years,” says the 46-year-old former marketing director turned international yoga teacher. “I see the same changes in my students.”

Certainly, anyone can understand why a vigorous Sun Salutation series would tighten the core and firm the triceps. But the experience of Pransky and her students takes yoga far beyond Physiology 101 and into the counter-intuitive world of mind-body mystery. Because what they are confirming is that a practice that at times looks like nothing more than lying on the floor with a couple of blankets under your tush can change your body.

It may sound like hype at first: “Melt fat without breaking a sweat!” Even scientists who’ve done some of the key studies recognize the disconnect. The weight loss that happens with gentle yoga isn’t due to the typical causal pathways, in which you burn more calories than you take in, says Alan Kristal, lead researcher in an ongoing study at the Fred Hutchinson Cancer Research Center in Seattle. Nonetheless, promising results continue to roll in. In Kristal’s study of more than 15,000 adults in their 50s, overweight people who did yoga at least once a week for 4 or more years lost an average of 5 pounds, while those who didn’t practice packed on an average of 13.5—a difference of nearly 20 pounds. Additionally, yogis who started at a healthy weight were more likely to maintain their weight than those who never unrolled a mat. (And these yoga poses can also help relieve menopause symptoms.)

Despite not knowing exactly how sweating so little can work so well, scientists are piecing together a compelling story about gentle yoga. Its basic outlines will be familiar to anyone who has ever read a self-help book. Changes in the body change the mind, which changes behavior, which reinforces changes in both mind and body. In this case, what’s profound is what this virtuous loop ultimately changes: the body’s very shape and size.

Josie Say (left), 39, no longer worries about the scale. Instead, she applies the stress-lowering techniques she learned on her mat to her relationship with food; and as a result, she dropped two sizes. Jenese Martinez (right) discovered that she didn’t have to fight her body to change it. At 44, she is happier and lighter (she dropped 20 pounds with yoga) than she was working as a fitness instructor in her 20s.

To connect the cutting-edge-research dots, let’s start with new findings that show how the ancient practice alters the structure of the brain, enlarging the stress-regulating hippocampus as well as the superior parietal cortex, which governs focus. Scientists have already confirmed what anyone who’s dived headfirst into a plate of fries after a bad day knows: Stress can lead to a poor diet. Consumer Reports last year asked 1,328 psychologists which strategies are essential to losing weight and keeping it off, and the top answers were “understanding and managing the behaviors and emotions” and “emotional eating.” So it stands to reason that a regular yoga practice, by improving how the brain controls your reaction to stress, could lead to healthier food choices and, perhaps, easier weight loss.

“I try to eat foods that will serve my body, but I no longer become upset when I cheat,” says Josie Say, 39, a student of Pransky’s who dropped two dress sizes when she first picked up yoga and then quit obsessing about the wobbling needle on the scale. Now, when she gives in to cravings, she takes a deep breath and moves on. (Try these 7 yoga poses that help curb a binge and help with appetite control.)

In nonscientific terms, Say is describing self-compassion, and research has shown that people who avoid beating themselves up over diet slip-ups are much more likely to go back to healthy eating at the next meal. While claims that yoga promotes self-compassion are impossible to study in a randomized controlled trial, regular practitioners attest to how yogic lessons (the stuff teachers often share at the beginning and end of class) encourage them to do something a breakneck boot camp class might not: search their souls and be nice to themselves. “The work you do in class fosters a compassion that flows into every aspect of your life,” says Pransky.

That resonates with Jenese Martinez, 44, another student of Pransky’s. Martinez spent her 20s alternating between intense sessions at the gym and late-night binges. “Before I found yoga, I was my own worst enemy,” she says. “I spent years fighting my curves. But the yoga teachings helped me to stop focusing on the shape of my thighs and start honoring who I really was. Instead of saying ‘I hate you’ to my body, I started to say ‘I love you.’ ”

Her introspection led to transformation: Within 6 months of starting a gentle practice, Martinez saw the 20 pounds she’d been trying to lose melt away. She simply started to consume less and noticed that even when she did want the occasional glass of wine or slice of cake, she enjoyed it much more. The research backs up her steady, powerful shift. According to a study published in the journal Qualitative Health Research, an at-home yoga practice reduced women’s bingeing in 12 weeks. Simply by cultivating present-moment awareness, the participants found that they ate less overall.

While practicing yoga may help you take in fewer calories, it may also be changing where those calories end up. Fat collects where we want it least—the stomach—in part when levels of a so-called stress hormone, cortisol, rise. Not surprisingly, yoga has been shown to reduce cortisol levels, presumably making it easier to shed belly fat.

Fascinating new research bears this out. In a study funded by the National Institutes of Health, women who did restorative yoga—a practice in which yoga poses are held for a long time, typically on the floor and supported by blankets and props—burned 2% times more body fat than those who just stretched for that same period. In another study, published last year in the Journal of Alternative Medicine, overweight men who practiced yoga and breathing exercises daily lost an average of 4 pounds in only 10 days.

Yoga’s focus on the breath and body is likely the key to many of its results. Increasing mindfulness on the mat makes it easier to stay tuned in the rest of the day—which could translate into something as simple as realizing that your body is craving a walk or eating only when you’re hungry.

That’s what happened with Martinez. After several months of practicing yoga, she was able to ask herself why she’d wandered into the kitchen in the first place. Was she hungry, or bored?

Whatever the cascade of impacts, the benefits appear to last as long as the practice does. Stay away too long and the effects start to fade, as Jenene Klem, 48, learned.

For years, Klem enjoyed matching her practice to her mood. At some point, though, “I lost my yoga,” she says, and she gained 20 pounds. Despite diving into vigorous cardio and strength-training classes, Klem was unable to shed the weight. She recalls being ravenous after class and paying little attention to how much or what she ate. Now she’s back on the mat, and the pounds are falling off again. “Yoga just makes you pay attention and think differently,” she says.

Thinking differently also means acknowledging that you’re human. “Sometimes you still go into that dark place of self-criticism or overeat from time to time,” says Martinez. “But it’s so nice to have this tool to help you get back on track. When it happens, you can come to your mat and say, ‘All right. Now breathe.’ ”

Scientists are just now uncovering the slimming power of gentle yoga. Jillian Pransky, 46, hasn’t thought about her weight in 10 years.

Start At Any Size
Yoga isn’t just for show ponies prancing around in their Lulus. Nancy Taylor, 44, lost more than 160 pounds with a regular practice and, like every yogi, had to start somewhere. She shares her tips for getting past the utterly distracting but mostly unavoidable self-consciousness that can come with getting started on the mat.

Don’t obsess about what others are thinking. “I worried people would think, Here’s a big girl in yoga,” Taylor remembers. “But nobody looked twice.”

You can wear whatever you want. No need to squeeze into leggings and a compression-bra top to do asanas: A T-shirt and any bottoms that allow you to move freely are fine. “Of course, if you’re comfortable with how you feel in spandex, wear it,” says Taylor, who rocked bike shorts and a sports bra even at her heaviest.

Good teachers matter. Finding a competent, versatile teacher is key, says Taylor. You want an instructor who will make you feel welcome and will make time to show you modifications.

There’s no such thing as being bad at yoga. You don’t have to do a yoga pose exactly like the person next to you, and it’s OK to rest in Child’s Pose at any point during a class.

Find your own flow. “Living in Los Angeles, I tried a lot of different styles of yoga,” Taylor says. “I ended up settling on Bikram because I felt like I needed something really invigorating. My friends thought I was crazy. Who would go into a room heated to 105°F and 40% humidity? But I loved it.”

Show up. Yoga teachers always say it, and they say it ’cause it’s true: The hardest move in yoga is getting onto your mat in the first place. Once you’re at class, the tough part is over, Taylor says.