Scouting opponents is a big part of preparing your team and getting them ready to play. Putting together a great scouting report will help the players kind of zero in on what players do what and how the opponent plays overall. For young coaches in their 1st or 2nd year and players that go scout opponents, sometimes they get too hung up on watching the ball, instead of watching what the players do without the ball. Watching the other players on the court can give you a good idea of how well they are coached and how well they know the game. For instance, if 1 has the ball, watch 2-5. Do they just stand around and wait for 1 to make a play? Are they constantly moving and setting flare screens or ball screens? After the big sets a ball screen and rolls, does he duck in at all? or does he just slide out and watch because his turn is over?

A lot of things can be seen from seeing what players crash the boards when the ball goes up and which ones stand and watch. What players are slashers?

Another thing to look at when scouting is how they react in tight games. Do they press man or zone? What plays do they run after a timeout? How is their rotation in man or how aggressive is their zone?

Some kids can hear the scouting report and be perfectly capable of executing it, other kids may be more visual, so having the JV squad run some of the BLOB or half court plays just to give them a look is important as well. 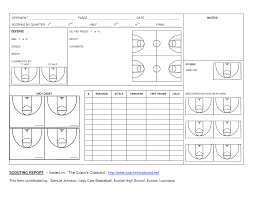