Model Your Youth Teaching After the Women’s College and WNBA Practices Instead of watching the NBA or men’s basketball… pay attention to women’s pro and college coaches. They are a great source for fundamental skill development. As a younger coach I had a tendency to discount the women’s side of the game, but I’m really growing to appreciate women’s basketball, especially as it relates to the youth and middle school level. The women aren’t dunking, so they’re much more fundamental when you watch the practices at all levels of the college and 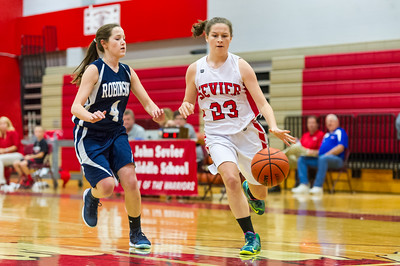 Model Your Youth Teaching After the Women’s College and WNBA Practices
Instead of watching the NBA or men’s basketball… pay attention to women’s pro and college coaches. They are a great source for fundamental skill development. As a younger coach I had a tendency to discount the women’s side of the game, but I’m really growing to appreciate women’s basketball, especially as it relates to the youth and middle school level. The women aren’t dunking, so they’re much more fundamental when you watch the practices at all levels of the college and pro game. There are some great coaches out there. If you have those coaches in your area, go watch their practice and take your youth coaches to that. It can be fantastic.
Use High School Players to Mentor and Teach Youth Players
Involving the high school players in your youth practices, basketball camps, and clinics does wonders for the program. To teach and coach, the high school players have to know the fundamentals and learn it better when they are teaching the young kids. Also, the younger kids become connected with the high school program and start attending more games. As they become more involved they will have a desire to one day be on the team. The more families who are in contact with the high school players, the more the entire community becomes connected to your program.
Handling a Time Out
Try to avoid the knee jerk timeout. Before the game, mentally review when you are going to use the timeouts. Maybe you want to call a timeout at a certain minute mark or at a certain point spread. With a strategy in place, you are taking control of the game and have a better chance of impacting the game.For youth and middle school coaches it’s real important how you handle a timeout. It takes discipline. In the past, I always subbed during a timeout, and I spent the first 30 seconds of the timeout figuring who I had in. Then, I was left with 30 seconds telling them instructions. I now keep the same guys in and sit them down on the bench. Waters are brought to them and they keep paying attention while I instruct them.Another point…How many coaches take a timeout when their team went out on a good run just to focus and positively reinforce what the other team is doing? A lot of coaches don’t want to do that, because they feel like they’re stopping the flow. But sometimes, especially at the youth levels, the kids need their coach to say, ‘You guys are doing great. Way to go!’ Most of the time when kids come to the timeout it’s because things aren’t going so well, except for the late game timeouts where you might be trying to stop the clock. Change it up once and awhile and use the timeouts to praise the kids for working hard and doing well.
Liven Up Your Practice!
Practice needs to be FUN. Players like to go to practice that has games, fun drills, and a chance to win a contest or two. Here’s a great idea to involve your youth players more in the practice…Break players into two teams. Choose a captain for each team and give him a white board. Let the offensive captain draw up a play. Then rotate captains for the next play. Or, let’s say you want to work on out of bounds plays. We’ve done practices where 20 minutes I have allotted to out of bounds plays since a lot of scoring happens on these plays at the younger levels. The wrinkle is that the kids draw their own out of bounds play. I would tell one team that they had to play zone, and the other team had to draw a zone out of bounds play, and it would be amazing what the kids came up with.I’ll be valued as a successful coach partly by the number of players I coached who go on and become coaches. At least I have been a good role model. If you can do things like this it gives kids ownership. It may not work in every situation, but it’s interesting to see how engaged my 8th graders get when they can coach a little.
Focus on the Positives
Lastly, you should not focus so much on the mistakes of your players and don’t try to over coach them. They are playing the game of basketball to have fun. Don’t spend 20 minutes of your practice running them to punish them or get them in shape. Put a ball in their hand and be creative with your drills to make them both skill development opportunities, as well as conditioning. Remember, as a coach you have a chance to impact a child’s life. Be yourself and make your time with your kids enjoyable for you and for them.