The traditional man-to-man defense is by far the most common defense in the game of basketball today. This is especially true as players progress to a higher level of competition. In fact, due to the great outside shooting of professional players, every NBA team almost exclusively plays man-to-man defense. The man-to-man defense involves all 5 defensive players on the court being allocated one opposition player who they’re accountable for defending whenever they’re on defense. Of course, there will be times when players switch opponents or help each other on defense, but for the most part, each player is responsible 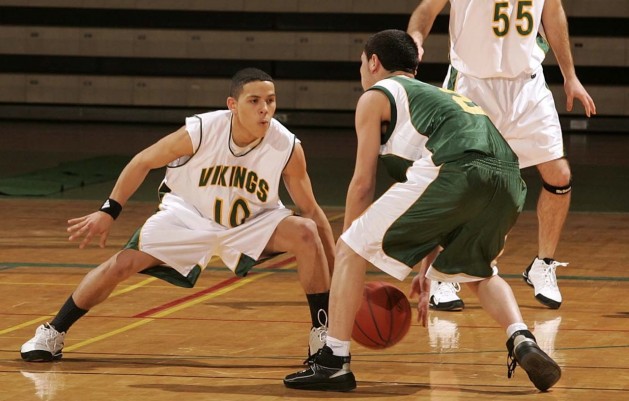 The traditional man-to-man defense is by far the most common defense in the game of basketball today.

This is especially true as players progress to a higher level of competition. In fact, due to the great outside shooting of professional players, every NBA team almost exclusively plays man-to-man defense.

The man-to-man defense involves all 5 defensive players on the court being allocated one opposition player who they’re accountable for defending whenever they’re on defense.

Of course, there will be times when players switch opponents or help each other on defense, but for the most part, each player is responsible for one player from the opposition.

Learning to be a great man-to-man defender is perhaps the most important skill for a player to learn during their years of youth basketball.

No matter what defense a player goes on to play at the next level or on another team, the skills they learn playing man-to-man defense will transfer. Unfortunately, the same can’t be said for players that solely learn zone defense.

If you’re coaching youth basketball, taking the time to teach your team man-to-man defense will go a long way to preparing them for the next level.

2. Many Variations – There are many different ways to run your man-to-man defense depending on the team you’re playing against and what the strengths and weaknesses of your team are.

3. Preparation for future basketball – The better players get at man-to-man defense during their youth, the more opportunities they’ll get as they advance to higher levels of play.

Weaknesses
1. There’s a lot to teach – Players will need to learn more defensive skills than if they were to play Pack Line defense or a zone defense. A lot of situations a player must know how to defend and where to position themselves.

2. It will take time for your players to successfully run – One of the most common reasons for youth coaches running a zone is that they don’t have enough time to teach a man-to-man defense. They’re right. There’s a lot to learn and it will take time. But it’s definitely worth it.

3. Unable to hide weak players – In the man-to-man defense, everyone is held accountable for their role defending the basketball and being able to help and rotate when needed.

Man-to-Man Defense Rules
While I’ve listened to coaches name hundreds of rules associated with the man-to-man defense, there are only 5 key rules that you need to teach to your players.

1. No Middle Penetration
If you plan to run the man-to-man defense with your team, the next sentence is the most important thing you need to teach them…

Not allowing the opponent to into the middle of the lane from the top or the wings is the most important rule of man-to-man defense.

Instead, defensive players must use their stance and position themselves in such a way that the opposition can only dribble down the sideline and the baseline.

When an opposition player has the basketball at the top of the key, we direct them towards the sideline.

When an opposition player has the basketball on the wing, we direct them towards the baseline.

“Why the baseline instead of the middle?”

The reason we direct opponents towards the sideline and baseline is because it’s much easier to defend and rotate on a baseline drive than it is when a player drives into the middle of the lane.

This is because the help defenders roles and responsibilities are clear in regards to who is meant to help and rotate when the basketball is on the wings or in the corners.

When the basketball is driven into the middle, however, who is meant to help and who is meant to stay on their player becomes difficult to define which often leads to open scoring opportunities for the opposition.

2. No Ball-Reversals
How many times have you heard a coach scream out “Reverse the basketball!” to their players?

A lot, I bet. Perhaps you’ve even done it yourself.

There’s a good reason for it if you have… it works for the offensive team!

The more you can get the defensive team to move and rotate, the more gaps will open up in the defense and the number of open scoring opportunities will rise.

So when you’re playing man-to-man defense, once the basketball has been passed to one side of the floor, we never want to allow it reverse back to the top or the opposite side.

The players defending the ball-reversal should be in 100% deny the entire time.

3. No Help from Defenders One-Pass Away
This is the biggest difference between the Pack Line defense and the man-to-man defense.

In the Pack Line defense (which I often recommend), the players one-pass away from the basketball are helping in the driving lanes by taking away dribble penetration. This allows the basketball to be passed around the perimeter.

In man-to-man defense, since the players one-pass away from the basketball are denying the pass to their player, this leaves driving lanes open and means the on-ball defender is more accountable for keeping the player with the basketball out of the lane.

If an opposition player does attempt to drive down the middle, the player one pass away can quickly ‘stunt’ in their direction to get the offensive player to pick up the dribble, but they can never fully help.

If they do, it will often lead to an in-rhythm jumper or an offensive drive after a difficult closeout.

4. No Face Cuts
A defensive player must never allow their opponent to cut across their face in-between them and the basketball.

The ‘no face cuts’ rule will most commonly occur when the offense performs a ‘pass-and-cut’.

When an offensive player makes a pass to a teammate (they will still happen even if we’re denying them), the player defending the passer must immediately ‘jump to the basketball’ to force their opponent to cut behind them instead of in front.

This rule is also important when playing defense off the ball to stop players from flashing to the ball to receive a pass.

To put it simply, a defender must always stay between their man and the basketball whenever they’re playing off-ball defense.

5. Move When the Ball Moves
The final rule is to ensure that players are playing correct off-ball defense.

Whenever the basketball moves, every defensive player on the court should be adjusting their positioning on the court.

By keeping the importance of this in mind, players will learn that they must stay alert at all times and anticipate passes that they may be able to deflect.

As the great Don Meyer puts it…